What you need to know about the New Hampshire primary 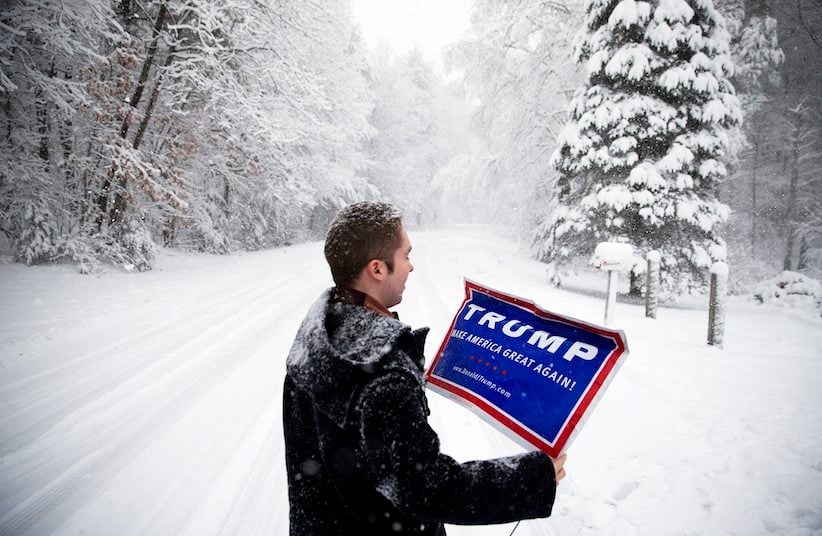 DERRY, United States — A key to understanding the 2016 U.S. election was beneath the feet of two of its principal antagonists the other night, buried below the spot where they were standing.

The local historian who runs it recalls the once-bustling main street, filled today with a high-end shop here, a pawn shop there, and an empty storefront or two in between.

“These were all factories. Shoe factories. Gone,” Rick Holmes said, gesturing at the street.

“Gone, with the middle class.”

New Hampshire is actually an economic success story. It’s among the richest states. It has a microscopic unemployment rate of 3.8 per cent.

But pop open the hood and underneath those numbers you’ll find the same engine powering the discontent now threatening to overrun the establishment of both political parties.

This state has bled manufacturing jobs, like much of the country. And the two insurgent candidates who could win Tuesday’s primary have seized upon that sense of loss as their central message.

Donald Trump and Bernie Sanders are leading big in New Hampshire polls, to the mortification of a political establishment that has derided both as unelectable.

The rumpled socialist and the bewilderingly coiffed billionaire may be different personalities, with different worldviews, proposing different solutions.

But they’re pointing to the same issues, real or alleged: free trade, decent jobs shipped overseas or replaced with machines, and an indifferent political class distracted by the priorities of its campaign donors among the mega-wealthy one per cent.

For Sanders, the proposed fix involves a drastically expanded social-safety net: free college tuition, Canadian-style health care, and paid parental leave. For Trump, it’s about kicking out millions of illegal migrants from Mexico, who are working under-the-table for cheaper salaries than Americans would.

They have one major policy in common: ripping up trade deals.

“They both come across as angry men. And I think many of their voters are also angry,” he said. “They’re frustrated, trying to balance the family budget.”

Signs of change surround his town. Around the corner, the last of the old abandoned factories is about to be demolished after it’s stripped of salvageable scrap metal.

Down the street in a popular diner, one waitress says every person she knows is voting for the one of the two candidates: “All Bernie. And all Trump,” Amanda Parker says. “One or the other. It’s strange.”

Another waitress feels their frustration. Linda Guilnet says people live paycheque to paycheque. Health insurance can cost half that paycheque, and politicians are too busy squabbling to help the American worker.

“You get to the point where you’re tired of hearing it. (Politicians) are fighting against each other _ but you’re not telling me what I want to hear,” said the manager of Mary Ann’s diner.

“People are concerned… People want to get back to where they should be. Instead of struggling.”

Many people have benefited from the increasingly digital, global, service-oriented economy. This Boston bedroom community is surrounded by such evidence. It’s dotted with McMansions erected during the dot-com and real-estate booms of the last two decades.

But the prevailing negative mood is amply chronicled in numbers — in economic data, the national census, and surveys:

— More than 60 per cent of Americans believe their children’s generation will be worse off — the opposite of how people feel in growing economies in Asia, according to a Pew survey.

— The middle class is shrinking. Pew described a historic tipping point in another study: it said poor and rich people now outnumber the U.S. middle class, with middle-tier earners shrinking nine per cent since 1971. The result is a more unequal country _ with many rising to the top tier, and about half falling the other way.

— The biggest losers include two groups: the less-educated, and the young. People with only a high-school diploma have seen their share of the national income fall a whopping 22 per cent since 1971, and young 18-to-29-year-olds have seen it drop five per cent.

Sanders took 84 per cent of the youth vote in Iowa, according to exit polls that showed Clinton winning richer, older voters. As for Trump, polls have shown him dominant among Republicans who never went to college. With those who have a degree, he’s a fourth-place also-ran.

An expert on public opinion at the University of New Hampshire says the two men are appealing to very distinct subsets among the frustrated.

”The same economic angst underlies voters in both parties,“ Andrew Smith said. ”But I don’t think there are many people saying, ‘Hmm, should I vote for Sanders or vote for Trump?’… The tone certainly is different.”

A Sanders fan concurs, brushing off a comparison between the socialist who blames billionaires, and the billionaire who blames foreigners. Kim De Lutis says: “They are polar opposites. Trump divides, Bernie unites.”

But there’s enough anger at politicians for them to share. The approval rate of Congress has historically bounced around between the 20s and the 50s according to Gallup surveys.

It’s now in the teens, and has been for years.

Holmes has prepared for the future. He’s built an additional floor above his home _ for his kin to live in, with their children.

“(In the old days) everybody who worked could afford a house. Today, I don’t think that’s true,” he said.

“A lot of people … feel left out. (They feel), ‘We are not part of what is happening to America anymore. America has changed… (And) they’re lashing out.”