When it comes to friends, Donald Trump needs only the bare minimum

As threats of impeachment swirl around Trump, Republicans are still rallying around him. But some don't seem so sure. 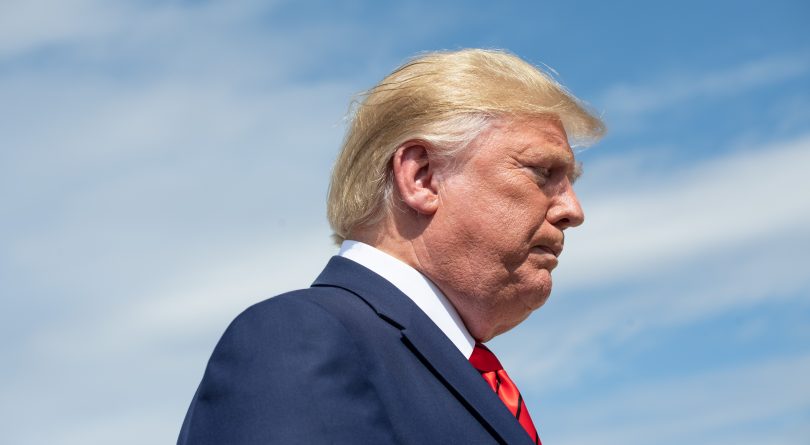 U.S. President Donald Trump speaks to the press after arriving on Air Force One at Joint Base Andrews in Maryland, September 26, 2019, after returning from New York. (Photo by SAUL LOEB / AFP/Getty Images)

Donald Trump needs only 34 friends to save his tangerine neck but his lifeboat is getting leaky. “Cracks emerge among Senate Republicans,” the Washington Post assures its Trump-hating owner and subscribers. “I would not be happy,” a member of the Grand Old Party from Wisconsin says of the latest furor, if in fact the furor is true. Mitt Romney, the stately Utah loser, may well join the cheese-headed maverick in voting to convict and depose The Donald when it comes to that, which it almost certainly will. That’s two own-party votes against the president. Maybe. Or maybe not.

It will be winter at the earliest when it comes to that—a trial in the United States Senate of the most singular and self-obsessed, the most furious and infuriating of the 45 men who have been president; or, in most of the counties of this favoured land that lie between Boston and Berkeley, the most passionately beloved. The partisan math favours Trump; it favours acquittal by the Senate’s Republican majority; it favours making all of this craziness, at the end of the day, as stale as Bill Clinton’s cigar. But that is many months away.

Now it is Thursday morning in Washington, pushing 90 degrees again (that’s 32 in foreign-heit) for the 59th time this spring-summer-fall. It hasn’t rained in a month. The tulip poplars have given up and are flinging down their yellow-purple leaves.

“Is the whistleblower a political hack?” Pencil-Neck presses the acting director of national intelligence. This is a Brooklynite named Maguire—a former Navy SEAL and commander of Navy SEALS—whose name now and forever will be linked, not with patriotic sacrifice and clandestine submariner bravery, but with the impeachment of Donald John Trump.

“Not a hack,” the acting director finally comes up for air to say. The lifeboat bursts another seam.

“This was different,” the Navy man shrugs. “Everything is unprecedented.”

(New polls on the Democratic nomination race are coming in from across the vital early 2020 states. Donald Trump may have forfeited his presidency out of fear of a man whose numbers are collapsing, who may not even win the Iowa caucuses, or the New Hampshire primary, or South Carolina, or Nevada.)

A dozen or so panjandrums were listening in on the late-July call. One of them, or some of them, or all of them, stool-pigeoned to someone else—a loyal CIA officer, or freelancing rebel, or Soviet mole—that the president’s deal-making sounded like either a high crime, or a misdemeanour, or maybe even both. That “someone else” called a misconduct penalty. Now the game is stopped while the crowd waits for the league to review.

Meanwhile, at the Intelligence hearing, another Democrat urges the acting director not to succumb to “the kaleidoscope of fantabulistic conspiracy theories that the ranking member thinks is happening here.”

The Republicans—minus Mitt—come and go from the Senate chamber. They pledge solidarity with the president and each other. Their path takes them through the hall of vice presidents. They stop and talk with us right in front of the marble Richard Nixon.

What a day. What a week. We’re packed in a hearing room, trying to munch our pretzels quietly. We’re staking out the Senate Subway, racing after members old and young. We’re sidling in the blistering sun toward a large group of people on the West Front of the Capitol—there’s supposed to be a big rally at 1 p.m., for impeachment, against impeachment, nobody seems to know.

False alarm—they’re tourists from mainland China. The mainland Chinese do not have public partisan politics, congressional committee hearings, fantabulistic conspiracies, articles of impeachments. When a corrupt warlord or a Gang of Four turns up, they have them shot or gassed or crushed by tanks. The same with yearning students.

On Jan. 20, 2021, a woman, or a new man, or the old one, will take the oath of office and fling a dandy speech about healing and nationhood out over the same broad lawn. Who will that be? Donald Trump? Mike Pence? Joe Biden? Elizabeth Warren? Beto O’Rourke? Andrew Yang?

We’re at a press conference with Nancy Pelosi, who is wearing suffragette white.

“Every day, the sadness grows,” says the Speaker of the House.

“I’m very prayerful about this.”

“It is a very heavy burden to go down this path.”

“I pray for an illumination. I pray for the president all the time.”

We’re on the train with Dianne Feinstein, Democrat of California. “Shanah tovah,” we wish her. On Sunday night, the Jewish calendar will turn to the year 5780. It was 5759 when Bill Clinton was impeached in the House and acquitted in the Senate. Dianne Feinstein voted to acquit. The next year, one of the Republican House members who prosecuted Clinton’s case in the Senate chamber lost his seat.

“It was a very sober thing,” Dianne Feinstein remembers of the Senate trial.

“This is a circus,” says Josh Hawley, Republican of Missouri, of the next trial, when the train arrives.

Donald Trump begins his day in Manhattan, the borough his father was afraid to take on, but not the son. The King of Debt hurries to a fundraiser and rich people give him a million dollars. Better to tithe to The Donald before Liz and Bernie take it all away.

The president flies home from his home.

“It’s a disgrace,” he says of the day, the week, the constitutional restraints.

“Democrats are going to lose the election and they know it. That’s why they are doing it.”

“It should never be allowed.”

“I have to put up with Adam Schiff on an absolutely perfect phone call with the new president of Ukraine. That was a perfect call.”

“The president of Ukraine said there was no pressure put on him whatsoever.”

“It shouldn’t be allowed.”

“Nothing gets done except when I do it.”

The green helicopter deposits the president on the South Lawn, the lawn from which Richard M. Nixon lifted off, making V’s for victory, back in 5734. He walks along the rope line, greeting visitors.

“Woman with tears in her eyes as she shook Trump’s hand.”