When Trudeau sold out to the Trumps

In a cunning and probably effective display of diplomacy, the PM handed over his feminist credentials to Donald and Ivanka

With Prime Minister Justin Trudeau now safely back in Canada from his meticulously choreographed and tightly scripted encounter with U.S. President Donald Trump, the fog of carefully practiced briefing lines and talking points is clearing just enough to allow a glimpse of the primary transaction that took place in Washington on Monday.

“It took Nixon to go to China,” and that hackneyed expression applies with an uncommon metaphorical precision to Trudeau’s enlistment in Trump’s otherwise wholly unconvincing escapade in the cause of recasting himself as some sort of sensitive and forward-thinking champion of women’s interests.

Not a month had passed since millions of women were marching in the streets out of anger that a foul-mouthed former beauty pageant impresario, a man who once notoriously boasted about his knack for groping women and getting away with it, had managed to concoct, fabricate and hormswoggle his way into the White House.

And yet there sat Donald Trump on Monday, at a board room table surrounded by competent and powerful women, not least his own daughter Ivanka, and sitting right beside Ivanka was the worldwide poster child for progressive man-feminism, Justin Trudeau. The “human sunbeam,” as New York Magazine’s Claire Landsbaum describes him in an account of Monday’s meeting, under the headline: “Justin Trudeau is Now Part of Ivanka’s Still-Mysterious Plan to Address Women’s Issues”. A fair point, too. It’s exactly what Trudeau made of himself on Monday.

It took Nixon to go to China, and it took Trudeau—the dashing young statesman who has thrilled audiences at Davos, at the United Nations in New York and in Beijing with his stirring “I am a feminist” speeches, his gender-equal cabinet, his determination to put a woman’s face on the Canadian $10 bill and so on—to make Trump look good. Or at least to make Trump, or at least his daughter Ivanka, appear to be genuinely interested in the challenges facing women. Or at least some women.

Most of the headlines were of this sort: Justin Trudeau, Donald Trump team up to support women in the workforce. Trump Joins Trudeau in Vowing Boost to Women in Workplace. Ivanka Trump Joins Justin Trudeau in Women’s Fight. This is a dramatic and almost unimaginable U-turn from the sordid public impression the Trump family and the Trump administration has been giving everybody.

Never mind that nothing was announced at Monday’s “roundtable” meeting that would immediately or substantially ease the burdens facing working women in the United States or Canada. Never mind that only four of Trump’s 25 cabinet appointments went to women.

Thrashing around for something to announce as a joint Canada-U.S. collaboration to mark a ritual high point in the first meeting between Trudeau and Trump, Trudeau’s team came up with a proposal for something called “the Canada-United States Council for Advancement of Women Entrepreneurs and Business Leaders.” The White House jumped at it. The Trump family brand being what it is, you can understand why. 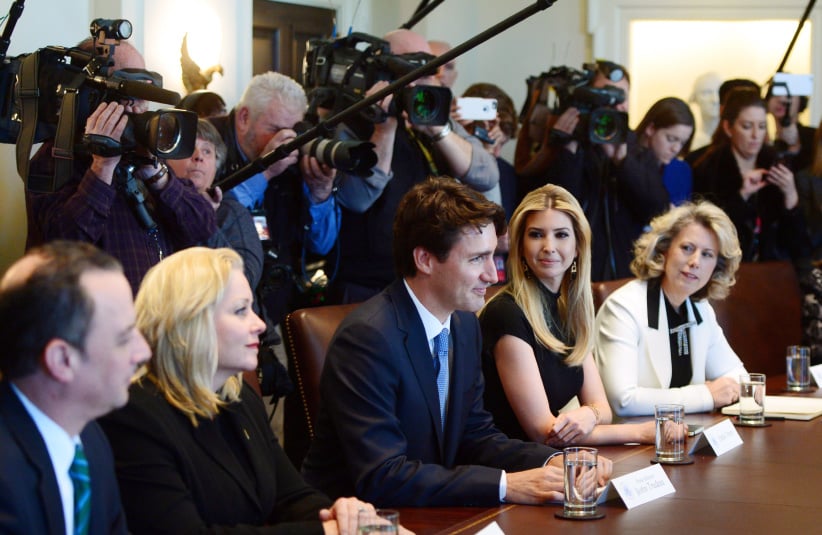 Early on in his presidential campaign, owing to his own reputation for what is known in polite company as misogyny, and his general unfamiliarity with and disinterest in matters related to women’s equality, Trump cultivated the habit of putting Ivanka on various stages and arranging heavily-controlled media availabilities with her. Among Ivanka’s alleged passions is a federally-funded paid maternity leave scheme, so she was useful to the Trump campaign for appearance’s sake.

But then it turned out that the American employees of Ivanka’s own clothing line were obliged to go without any maternity leave benefits, and were expected to return to work a week after childbirth. And for all Ivanka’s claims about caring for the plight of working women, her own racket in women’s fashions turned out to depend on offshore production lines of the kind her “Buy American” president-dad relies on for his Make America Great Again baseball caps and other such bric-a-brac. The women toiling for Ivanka are pennies-an-hour wage slaves in Vietnam, Indonesia, China and Bangladesh.

The usual White House lines between public service and private profiteering have become blurry and contested since Trump’s election.

Ivanka’s husband, Jared Kushner, is a senior Trump adviser, and she and Trump’s sons, Eric and Donald Jr., were supposed to be running his businesses and staying out of public affairs. And yet there was Ivanka in the weeks following her father’s election, attending meetings in Tokyo with Japanese Prime Minister Shinzo Abe, at the same time as her brand was in licencing talks with a firm closely tied to the Japanese government.

More recently, Ivanka’s businesses have suffered badly from a series of boycotts aimed at the retailers that carry the Trump brand lines. When the Nordstrom chain decided to pull Ivanka’s poorly performing merchandise from its shelves, President Trump weighed in on Twitter last week, accusing Nordstrom of treating his daughter unfairly.

The “Grab Your Wallet” boycott campaign appears to be hitting Ivanka Trump the hardest. Launched by San Francisco businesswoman Shannon Coulter after last October’s release of the scandalous Access Hollywood tapes, with Donald Trump grotesquely bragging about his ability to to grope women with impunity owing to his fame and power, the boycott campaign is starting to bite. National chains, including Neiman Marcus, Belk, Sears and Kmart, have pulled dozens of Trump-brand products. Imports associated with Ivanka Trump’s brand dropped a full 50 per cent in the three months leading up to Feb 1.

It’s not likely to turn things around overnight, but Ivanka Trump’s tarnished brand underwent a radical makeover on Monday. She was hovering around the centre of Monday’s attention, basking in Trudeau’s groovy feminist vibe. With the way things are going around the Trump White House, anything might yet happen, but on Monday, Canada’s well-founded fear that Trump’s belligerent protectionism might wreak havoc on the roughly balanced $660 billion annual Canada-U.S. trade relationship seemed to just melt into the air.

For now, thanks to weeks of effort expended in and around Washington by Trudeau’s team, led by Foreign Affairs Minister Chrystia Freeland, the grown-ups seem to have carried the day, even if it’s for the most juvenile kinds of reasons. The scariest thing Trump had to say on Monday was that as far as Canadian trade was concerned, the North American Free Trade Agreement might have to be tweaked a bit. That was pretty well it.

Among the members of the newly-minted Canada-United States Council for Advancement of Women Entrepreneurs and Business Leaders are such corporate heavyweights as General Motors board member Carol Stephenson, Accenture North America CEO Julie Sweet, Elyse Allan, president and chief executive officer of GE Canada and TransAlta president Dawn Farrell. Although she holds no official position in her father’s administration, Ivanka Trump was directly involved in selecting several of the council’s members, and Ivanka’s husband Jared Kushner recommended it to Trump enthusiastically.

If spending some of the capital from Trudeau’s progressive brand on an Ivanka Trump vanity project had anything to do with the surprisingly civil tone Donald Trump maintained in his remarks about Canada on Monday, then it was worth the cost.
A cunning game, but well played.