Where is Joe Biden?

U.S. Politics Insider for March 23: Biden takes a huge lead for the Democratic nomination right before the pandemic hits; then he disappears. Plus, a look at the red/blue split on COVID-19. 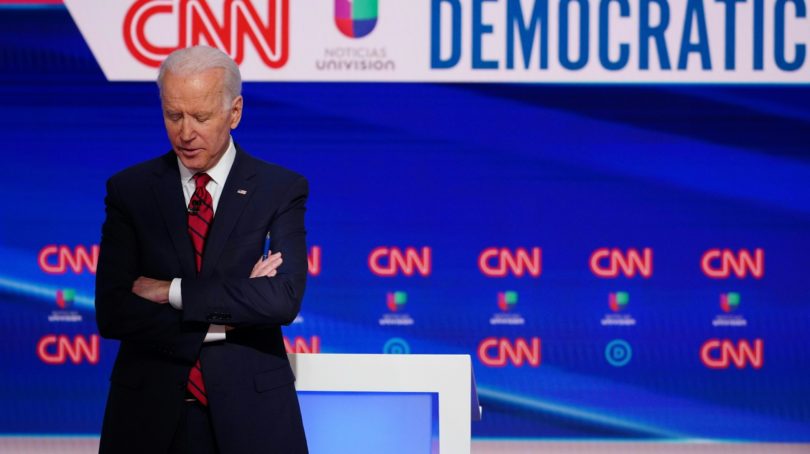 Joe Biden is seen on stage as he and Senator Bernie Sanders take part in the 11th Democratic Party 2020 presidential debate in a CNN Washington Bureau studio in Washington, DC on March 15. (Mandel Ngan / AFP via Getty Images)

#WhereIsJoeBiden: Joe Biden took a nearly-insurmountable lead for the Democratic nomination just before the world was completely transformed by a pandemic. Now he’s the presumptive nominee, and you might have expected him to use that status to pivot to the general election (whenever that ends up being). Instead, he wasn’t seen for days after the last primary elections last Tuesday:

Biden is also facing criticism for being largely absent to the public since Tuesday’s primaries. The former vice president has not been seen or heard by voters directly since his Tuesday night address, leading to the hashtag “#WhereisJoeBiden” to trend on Twitter.

It may not help that Biden’s campaigning style is, as ABC News puts it, “reliant on in-person interactions,” and his campaign is trying to figure out ways to adapt to the new status quo, where most of his appearances will need to be virtual and, in many cases, out of his residence in Delaware:

A source with knowledge of the campaign said Biden’s team is working on scaling up that infrastructure and dealing with the realities of Biden’s Wilmington Home, like the fact that there aren’t particularly high ceilings, which can make lighting a challenge.

Congress’s stimulus deadlock: Meanwhile, weeks after much of the U.S. economy began shutting down, the country’s legislature — the House, led by Democrat Nancy Pelosi, and the Senate, led by Republican Mitch McConnell — proved unable to pass or even agree on the substance of a stimulus bill for the newfound recession. Democrats in the Senate, led by Charles Schumer, blocked voting on McConnell’s version of the bill, charging that it lacked features to protect individuals from eviction or financial ruin, pointing out that it had “a provision of only three months for unemployment insurance.” Pelosi said her House caucus would reject the Senate bill and vote on its own separate bill. And all of this was happening while the House and Senate still relied on in-person voting in a crowded building, even as Rand Paul revealed that he was the first Senator to test positive for COVID-19, leading some of his Senate colleagues to self-quarantine and miss the procedural vote on the stimulus bill.

The red/blue split on COVID-19: One reason the U.S. parties can’t agree on a COVID-19 package may be that they represent two Americas where the crisis is being experienced differently. As Ronald Brownstein explains in The Atlantic, the biggest outbreaks so far have been in areas and states that mostly vote Democratic, while Republican areas were not hit as hard right away:

Democrats consistently express much more concern about [COVID-19] than Republicans do, and they are much more likely to say they have changed their personal behavior as a result. A similar gap separates people who live in large metropolitan centers, which have become the foundation of the Democratic electoral coalition, from those who live in the small towns and rural areas that are the modern bedrock of the GOP.

One result of this, Brownstein notes, is that with exceptions such as Ohio Governor Mike DeWine, Republican governors have generally been more reluctant to shut down businesses than their Democratic counterparts. However, Brownstein talks to experts who expect that this will change as the outbreak begins to “reach all corners of the country.” That’s not good news.