Who is Rod Rosenstein?

The deputy attorney general has vaulted into the public conversation. But where does he come from? And what does he stand for? 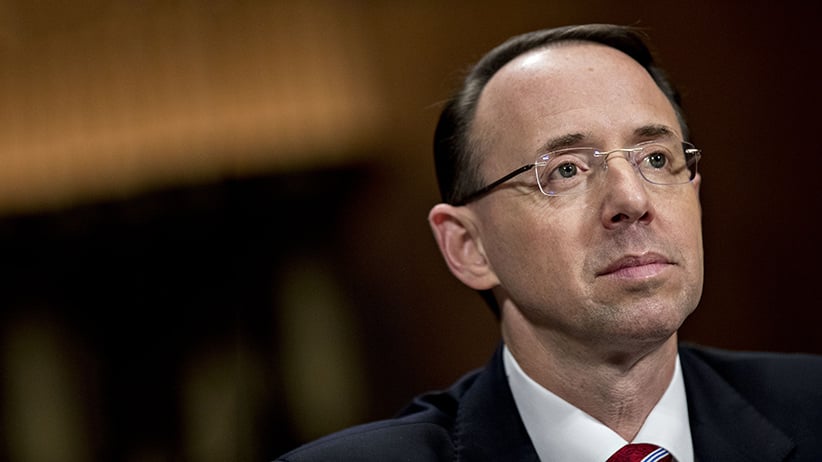 Until a few weeks ago, Rod J. Rosenstein was a U.S. attorney who’d held the same post in Maryland under three presidents. Rosenstein, a public servant in the Department of Justice for more than 25 years, was a George W. Bush appointee who stayed on at Barack Obama’s request. Earlier this year, when Donald Trump asked for the resignations of all Obama-appointed U.S. attorneys, the president made an exception for Rosenstein and soon after nominated him as deputy attorney general. The confirmation process was, relatively speaking, a breeze, and the Senate confirmed him by a vote of 94-6. On April 26, he started his new gig.

Less than two weeks later, Rosenstein was on his way to being a household name. On May 9, he penned a memo that made the case for dismissing FBI director James Comey (though Trump later admitted he’d have fired Comey regardless of any recommendation). On May 17, Rosenstein appointed former FBI director Robert S. Mueller as special counsel to oversee the Bureau’s investigation into Russian interference in the U.S. election. Today, he’ll brief senators on the unfolding situation.

RELATED: Who is Robert Mueller?

Suddenly, Rod Rosenstein is one of D.C.’s most influential players. But who is he?

Born in 1965 to a father who ran a small business in Philadelphia and a mother who was  a bookkeeper and school board president, Rosenstein is married with two daughters. His sister, Dr. Nancy Messonnier, is the director of the National Center for Immunization and Respiratory Diseases at the Centers for Disease Control and Prevention.

At his confirmation hearing last month, Rosenstein explained to senators his basic set of values, which he said he learned growing up in a town northeast of Philadelphia. “In my small hometown of Lower Moreland, Pennsylvania, I learned straightforward values. Work hard. Play by the rules. Question assumptions, but treat everyone with respect. Read widely, write coherently and speak thoughtfully. Expect nothing, and be grateful for everything. Remain gracious in times of defeat, and humble in moments of victory. And try to leave things better than you found them.”

At the same hearing, Rosenstein also spoke exhaustively about public service. He attended the Wharton School of Business at the University of Pennsylvania and then Harvard, where he was an editor of the Harvard Law Review, where he says he expected to rise to a position at a high-paying firm. But an internship at the U.S. Attorney’s Office in Massachusetts changed all that. He deeply admired colleagues of “great intellect and integrity” who were “doing the right thing and keeping people safe.” That set off a career in the Department of Justice that includes an impressive list of assignments. Here’s the list on his bio at Maryland.gov:

Clinton nemesis Ken Starr was responsible for Rosenberg’s stint in the Office of the Independent Counsel, where he contributed to the Whitewater investigation into the Clintons’ business dealings in Arkansas. He’s cultivated a reputation as a fair-minded attorney. Philip B. Heymann, a deputy attorney general during the Clinton years, vouched for that reputation in the Washington Post. “I would have trusted him with anything … If there was a case where I was worried there was a perception we were being unfair, I would trust him to do the right thing and to do the job.”

Rosenstein repeated that devotion to doing the right thing during his confirmation hearing.

“The oath of office is an obligation. It requires me to support and defend the Constitution of the United States; to bear true faith and allegiance to the Constitution; and to well and faithfully discharge the duties of my office. I have taken that oath several times, and I have administered it many times. I know it by heart. I understand what it means, and I intend to follow it.”