Who won the U.S. midterms? Why, Donald Trump, of course

Allen Abel: Declaring victory by defeat, the president returns the Capitol to its regularly scheduled chaos 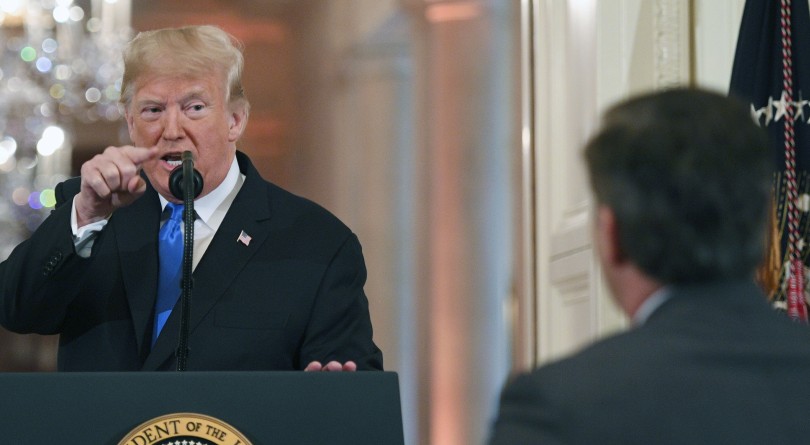 Losing is for losers, the great Fred Trump taught his Rolls-riding children, and so the plangent cry of his oldest surviving son echoed off the walls of Washington at Wednesday’s dawn: “Big Win,” “Big Victory,” “Incredible,” until he himself was convinced.

“Those that worked with me in this incredible Midterm Election, embracing certain policies and principles, did very well,” Donald Trump erupted, blind to the fateful lightning flashing in his eyes. “Those that did not, say goodbye!”

“Those are my principles,” said Groucho Marx, predicting this president’s next—perhaps final—two years as Nancy Pelosi’s water-bearer. “If you don’t like those, I have others.”

As always, The Donald spoke the truth. In some tranches of America’s vast, strained, yet indestructible democracy on Tuesday, last time’s losers did prevail: in Texas, where Lyin’ Ted Cruz, failed presidential candidate of 2016, death-gripped his Senate seat away from Beto O’Rourke, the leftist with the Latino nickname who is as Hispanic as corned beef and $70 million worth of outside donors’ cabbage; in Utah, where Willard Romney, rejected Republican commandant of 2012, was lofted to the Senate to spend his latter days riding the car-elevator to the basement as the most junior old white dude in the caucus.

But for every manly Mittens, there were two Muslim women and two Native American women sent to serve in the new-blue House of Representatives; for every holy Cruz, there was a proudly gay governor in Colorado and an outer-borough Ocasio-Cortez—young, female, of colour, Marxist (but not Groucho), and—with the Republicans still in control of the upper chamber—virtually powerless to do anything but subpoena, swear, and start raising money for 2020.

It is going to be unproductive, vindictive, and ugly in Washington for the next 24 months, and The Donald’s re-election campaign is unlikely to be a lodestar of civility, but then it always has been this way—think Abraham Lincoln cartooned as a long-tailed monkey in 1860; think of John Adams’s surrogates in 1800 calling Thomas Jefferson “the son of a half-breed Indian squaw.”

Donald Trump’s name was not on the ballot in any one of the 50 states on Tuesday; he was running in all of them, and so were long-faced Robert Mueller and Big Jim Comey and Flipper Michael Cohen. For the heir to Fred Trump’s creative—not to say criminal – lessons in bookkeeping and ethnic exclusion, the great legal reckoning still awaits, even as the surging U.S. economy Santas into what is predicted to be the first trillion-dollar Christmas shopping season.

In the Capitol on Wednesday, the red and blue tribes were grindstoning their weapons, but in the real world, the Dow was up five hundred points, high-school teams were scrimmaging under autumn leaves, Thanksgiving was awaiting the fully-employed multitudes, and thousands of stragglers from benighted hellholes on five continents still were willing to risk everything they had to reach The Donald’s golden door. Compared to this, the shadows of impeachment are irrelevant wisps.

All politics are local, but in the Trump era, all localities reflect the wider polity, condensed into one snarling, preening, extraordinary 72-year-old human being. Take him down or leave him standing, barring a hot war or a cooled economy, until November 2020 there will be no issue but he. Historians will feast on him for centuries—how he rose to power by riding down an escalator; how his anger, divisiveness, leadership, celebrity and brilliance reflect the invisibles hiding inside all of us.

RELATED: Round Two begins for Donald Trump. It will be messy.

“If the Democrats think they are going to waste Taxpayer Money investigating us at the House level,” the president capitalized on Wednesday morning, “then we will likewise be forced to consider investigating them for all of the leaks of Classified Information, and much else, at the Senate level. Two can play that game!”

Trump scheduled a press conference for noontide in the gilded East Room, his first formal combat in more than a year with we wee wretches who defame and inflate him, not to eat Kentucky Fried Crow, but to gobble like a tom on the way to the chopping block—about his popularity, about his demeanour, about his love of God, about his persecution by fake-media losers, about Tuesday’s historic victory-by-defeat. Meanwhile, Bob Mueller fused his bombs, recused Attorney General Jeff Sessions folded his hopeless tent and resigned, and senators named Harris and Klobuchar and Booker and Gillibrand and two dozen other Democrats prepared to tear out each other’s lungs in the name of shameless Trump-like ambition.

Across the Mall, more than 50 Republican senators waited on Ruth Bader Ginsburg’s inevitable appointment with eternity, even as Mrs. Pelosi surveyed a House that will be more tenanted than ever by members elected, to invoke a phrase from current cinema, on the basis of sex.

“I think people like me,” Donald Trump said in the East Room, condensing a 90-minute symphony of self-congratulation into six syllables, and he invoked the name of the Lord in his Hillary-blue tie and his diamond-studded cufflinks.

RELATED: How women candidates and voters turned the House on Trump

“Too bad, Mike, too bad Mia,” the president mocked the failed members of his own party, throwing them overboard in the same way that Fred Trump once taught his children that bankruptcy is genius and stiffing the sub-contractors is great for the bottom line.

Goodbye to the also-rans, the surviving son waved, and then he went back to the business of victory, because it is not about policies or principles or Pelosi; it is about one man only, his petty fits and his gutter feuds and his blood-deep belief that, even after two failed marriages and the world’s mockery and whatever Robert Mueller has found but not yet revealed, losing will always be for losers, and losers are not the Trumps.