Why a Hillary Clinton victory begins in South Carolina 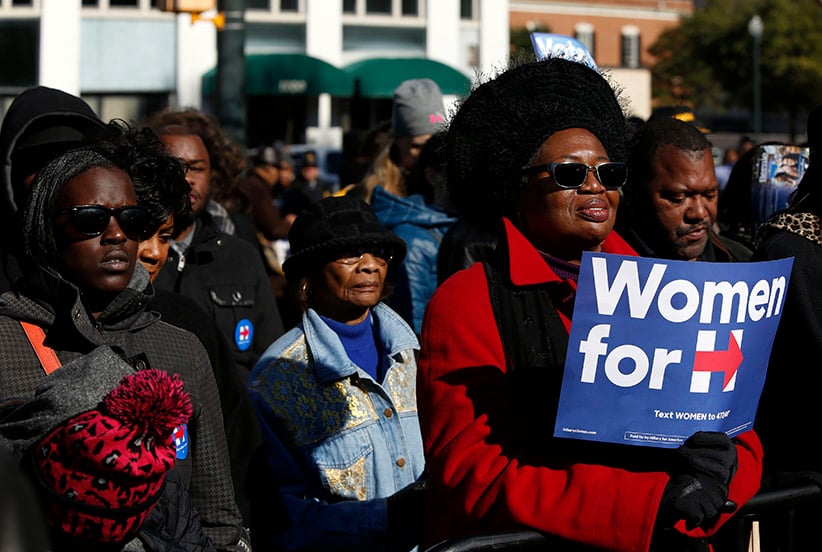 Burned once by man and once by God, the Mt. Zion African Methodist Episcopal Church of Greeleyville is only a spectre now, a bare, sandy patch of South Carolina, surrounded by swamps and cotton fields, hard by a grassy cemetery with just 11 graves.

Only the sign by the side of State Route 375— “Welcome service, 10 a.m. Rev. John Taylor, pastor”—gives the history away. That and a blackened metal bell, rimed with ash and set in a red brick frame, remind the few who pass this way of what once stood on this spot.

Last July, during a ferocious Lowcountry thunderstorm, Mt. Zion’s steeple was struck by lightning and the whole building crumpled in flame until little was left but the southern wall and its charred white wooden cross. A woman named Sheryl Rutling was working the 911 emergency line for Williamsburg County that night. “They’re burning the church. They’re burning the church,” she remembers callers crying. “And all I could think was, ‘Not again. Not again.’ ”

When those flames licked the skies last July, it had been exactly 20 years since two twentysomething sons of the rebel South had set fire to the original structure of the Mt. Zion African Methodist Episcopal Church. (The two white boys were committed to prison for nearly 20 years each.) 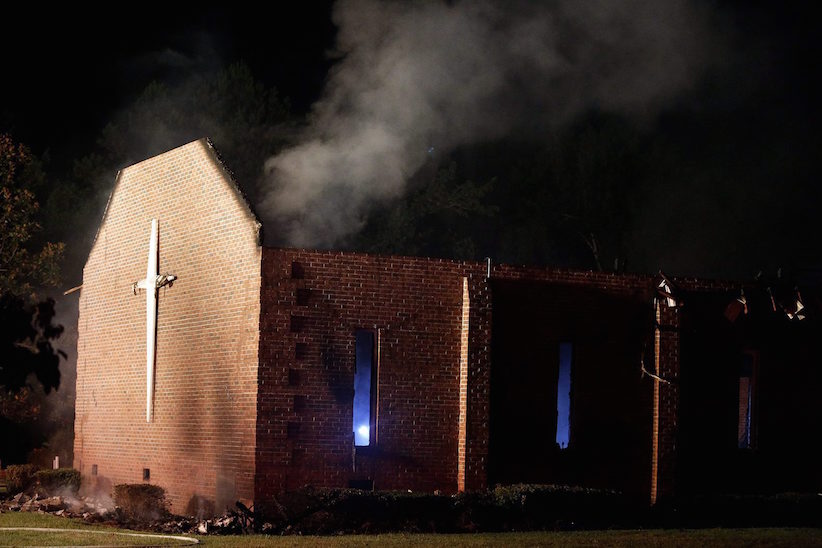 In the summer of 2015, it had been 19 years since president Bill Clinton had stood by the side of State Route 375 to personally consecrate Mt. Zion’s new building. And it had been less than four weeks since another hate-filled son of Dixie had walked into the AME Church in Charleston and murdered nine people.

Now it is winter and Sheryl Rutling is one of a hundred townspeople, bedecked in livid red and blinding white, at Greeleyville’s annual Valentine Ball. It is two weeks before South Carolina’s Democrats—about three-fifths of them African-American—will vote in their presidential primary. At the Greeleyville Valentine Ball, the racial ratio is even more tilted —95 to five—but the welcome is sweet and sincere.

After a surprise dead heat in nearly-all-Caucasian Iowa and her wipeout in even-whiter New Hampshire, supporters of former secretary of state Hillary Clinton have been citing South Carolina for months as her impregnable “firewall.” A narrow victory for Clinton in Nevada last Saturday only made it more imperative that she sweep the black vote down here. Sen. Bernie Sanders, it is widely said, will only be successful among voters of colour if the colour of the voters is pink.

“Put me down for Hillary,” Sheryl Rutling says.

“Because we are a country of Americans,” Rutling replies.

Little Greeleyville, population 375—scarred, poor, proud but sinking, just like the road that leads there—knows much about walls and fires. It is a hamlet where the entire Main Street retail strip has been abandoned, where the only supermarket sits trashed and empty under a marquee that reads Super G Foo, and where the only extant businesses on Valentine’s weekend are a dollar store and an iron-barred fortress that is doing a bustling business in malt liquor and mickeys.

“Everybody around here calls themselves Democrats,” says the town’s mayor, Jesse Parker. “But they don’t act like it.” Mayor Parker says that he can remember when there were four thriving clothing stores in downtown Greeleyville, and when a striving graduate could make a future here. Those days are distant, the mayor admits. His priorities now are to elicit enough state funds to provide sewer service for the half of the village that still relies on septic tanks; to slice through a briar patch of paperwork to secure a grant to bring a new business—any business—to town, and to reopen the shuttered health care clinic at least three days a week. 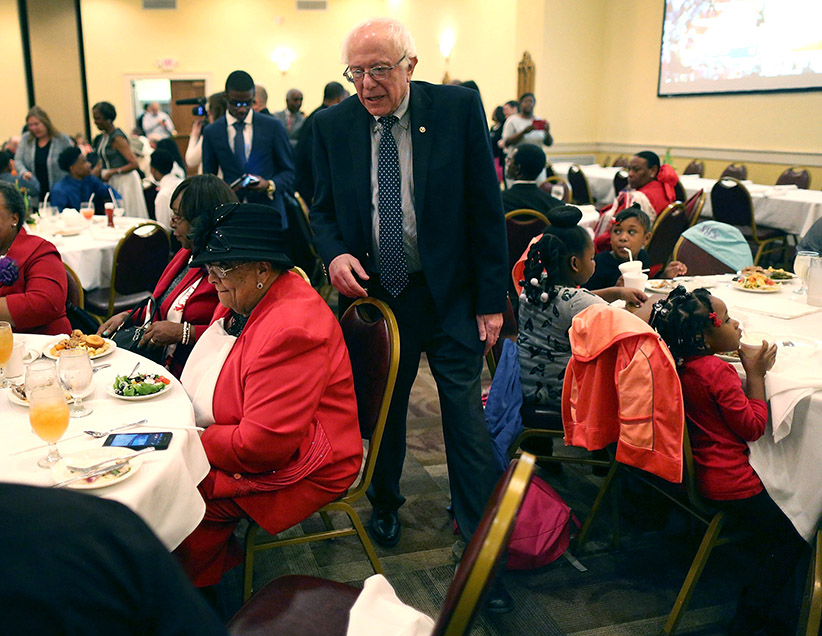 Economics, the mayor says, is the overwhelming issue here, but not in the way that Bernie Sanders sees it, as a pestilential slough of greed and corruption that raises the rich and drowns the rest. “He’s talking inequality,” Parker says. “He’s talking UN-equality. He’s blaming everything on Wall Street, but I know that’s not the case. What Bernie is espousing to do, there’s no reality to it. That’s just not happening! I don’t like the concept that everybody gets free college—what about people like Donald Trump and the Clintons who can afford to pay? Hell, we got folks right here who don’t need no help.”

Parker, a professional maintenance man by trade and a devoted volunteer coach and funder of youth sports teams, is a keen student of national politics. He predicts that, even if the Republicans hold on to the House of Representatives and the Senate, “they won’t tie Hillary’s hands the way they tied Obama’s.”

“Did you see the debate where Chris Christie destroyed Marco Rubio for giving the same answer over and over?” Parker asks. “Can you tell me that Bernie Sanders doesn’t give the same answer to every question they ask him?”

When Mt. Zion burned for the second time, “of course the first thing that ran to my mind was ‘Not again.’ But I didn’t want to rush to judgment. I remember that night, the storm was so powerful, the building I was in shook every time the lightning flashed.” (Federal investigators concluded that the 2015 fire was indeed weather-related.)

“It’s true that everybody’s got a little prejudice in them. I’m prejudiced, too,” the mayor says. “I’m prejudiced toward helping poor people, black or white.” 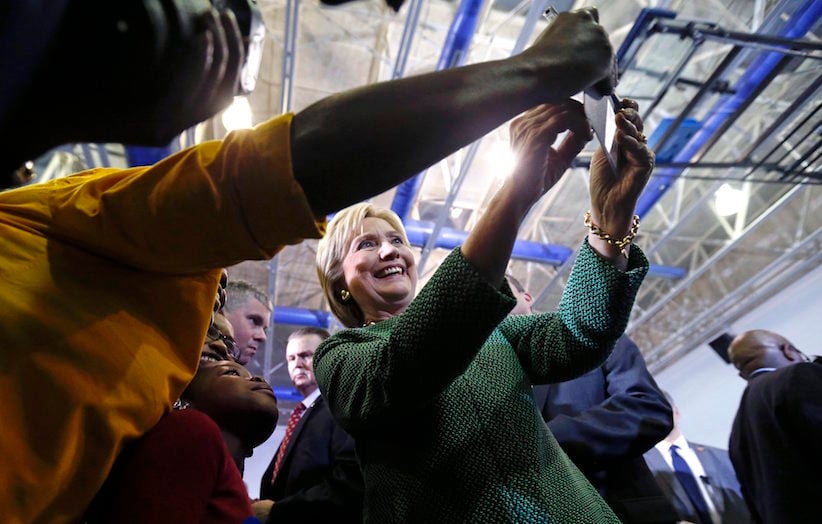 The Valentine Banquet features non-alcoholic punch, barbecued chicken and seasoned rice—the same crop that the ancestors of the celebrants were enslaved to sow and reap.

“Are you a billionaire?” a reporter in attendance asks a man named Ollie Pressley, who is a communicant of the Mt. Zion African Methodist Episcopal Church. “I can’t put two dollars together!” the affable Pressley responds.

“Can I put you down for Donald Trump?” Trump, of course, won South Carolina’s Republican primary by a landslide on Feb. 20. “Are you on drugs?” asks Pressley.

“Do you blame Wall Street for Greeleyville’s problems?” a reporter persists.

“I blame people,” Pressley replies. “If there were people on Wall Street who weren’t greedy, this wouldn’t happen. But that’s how people are. When this bunch dies out, a new breed of greed will come in.”

No one at the Valentine Banquet appears to be aggrieved about what Bernie Sanders labels the obscenely unequal distribution of America’s national affluence. “I have nothing against Donald Trump’s wealth,” says Pressley. “He’s campaigning on his own money, flying his own jet, and we aren’t paying for it.”

“I don’t even consider myself a thousand-aire!” laughs Sheryl Rutling. “But what I earn is mine, and if I ever reached billionaire status, I wouldn’t want anyone to judge me.”

“We need Hillary to win South Carolina,” says a woman named Zella Hilton, a native of little Greeleyville who works in the library of the University of South Carolina in the state capital of Columbia, an hour or so away. “Her track record speaks for itself. She and Bill were a team—he had the title of president, but she was right by his side. As they say, behind every great man is an even better woman!”

“What can Hillary do for Greeleyville?” Hilton is asked.

“Bring at least a food store, or a McDonald’s, or something,” she answers.

Greeleyville’s banqueters may not be rich, but their votes suddenly have become the most precious of the 2016 primary season. For the past month, Sanders and Clinton have been heralding endorsements from prominent African-Americans in a craven display of race-card politics.

“South Carolina, once home to the civil rights movement and Barack Obama’s surge, can help vet the candidate best aligned with the black community,” said Bakari Sellers, a former state legislator. “Bernie Sanders is not that candidate.”

“It’s good to have new friends, but I would prefer to have true friends. Hillary Clinton has been a true friend to the African-American community for more than 40 years. During that same period of time, Bernie Sanders has been largely missing in action,” said Rep. Hakeem Jeffries, Democrat of New York.

“There’s no candidate in this race as fearsome in standing up for those who need allies in the struggle than Bernie Sanders,” said Ben Jealous, former president of the NAACP.

“Bernie Sanders offers us a chance to declare unequivocally that there is a group of citizens who have a deep caring for where our nation goes and what it does in the process of going,” said the singer and activist Harry Belafonte.

“Bernie Sanders’s message about Wall Street just doesn’t resonate,” Rep. Marcia Fudge of Ohio, stumping for Hillary at a Baptist church in Effingham, S.C., tells Maclean’s. “We’ve been dealing with income inequality our whole lives. I have yet to see one piece of legislation from Bernie Sanders in his 25 years in Congress that addresses the problems that we face.”

Related: Maclean’s heads to Burlington, where Bernie was mayor

No endorsements have been solicited more shamelessly than the relatives of the recently and controversially dead. “Hillary Clinton is the only candidate right now who’s talking about how we can be strategic in trying to address police brutality,” said Gwen Carr, the mother of a man named Eric Garner who died after being placed in a chokehold by a New York City officer. “I’m never going to forget and I don’t want the world to forget what happened to my dad,” said Garner’s daughter Erica. “That’s why I’m for Bernie.”

Last summer, when the Lord Jehovah loosed the fateful lightning of His terrible swift sword on the Mt. Zion AME, the congregation repaired to a low, brick bunker called the Garden of Prayer just outside the town of St. Stephen. Here, every Sunday morning, the windows shake to the primal testimony of Pastor John Taylor, a shouting, sweating cinderblock of a man.

Rev. Martin Luther King Jr. once called 11 o’clock on Sunday morning “the most segregated hour in this nation,” and the very name of the African Methodist Episcopal Church reflects a heritage of separation, independence and self-reliance. And so it is here. “Nobody of honesty can overlook this,” said King.

Now it is noon on Sunday and the little congregation is emerging, blinking, into the Carolina sun.

“Anybody can walk around Greeleyville and say, ‘There is something wrong here,’ ” Taylor is saying. “But what are we doing about it?”

“I see the need for assistance,” he goes on, “but as far as blaming anybody, I’m not going to speak to that. We are all called to make a better life for ourselves, even in Greeleyville. Yes, there are a lot of job opportunities that I wish were here, but you can get a good education in Greeleyville. I don’t think there’s anything to hold you back.”

A question is asked about politics and Taylor calls Hillary Clinton “my sister in Christ.” So he, too, is a brick in the firewall.

“I believe in Sister Hillary’s message,” he says. “I think she is a unifier. I believe in the democratic system. That’s what our fathers fought for and died for.”

“Your name is still on the sign where the old church burned,” a visitor remembers.

“We are going to rebuild on the same site where we were before,” says Rev. Taylor. “Give us three or four months, and we will rebuild. I don’t ever want to say ‘Why not?’”