Democrats are slowly moving from attacking Trump's character to attacking his legitimacy, and just purely from a strategic standpoint, it could be a better option 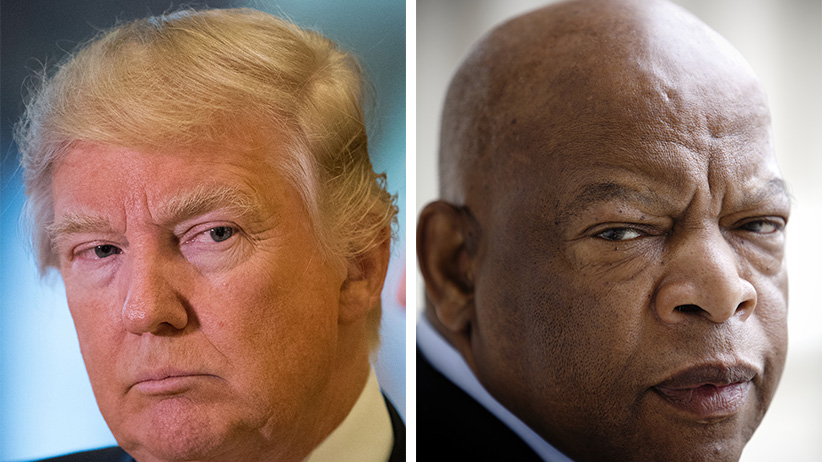 As the inauguration of Donald Trump draws closer by the hour to being reality, many liberals and Democrats are settling on a new line of attack against him: that his election was illegitimate. Longtime Democratic congressman and civil rights activist John Lewis took the lead by saying: “I don’t see this president-elect as a legitimate president,” because “I think the Russians participated in helping this man get elected.”

Other Democrats have made this claim, or announced that they aren’t going to the inauguration. Still others have declined to rule out the claim of illegitimacy. Former Democratic National Committee chair Debbie Wasserman Schultz, who had to resign her post after WikiLeaks seemed to reveal pro-Hillary Clinton bias on the DNC’s part (over her nominee rival, Bernie Sanders), is now saying that she would be willing to call Trump illegitimate if more evidence emerges “that the Trump camp colluded” with the Russians—which, of course, is meant to open the listener’s mind to the possibility that they did. It could be a sign that the Democrats are slowly moving away from attacks on Trump’s character and toward attacks on his legitimacy. Just purely from a strategic standpoint, it might be a better option.

Up until recently, Democrats have mostly gone up against Trump the way Meryl Streep did in her Golden Globes speech, by criticizing his behaviour as a bad example for the country and the world. It didn’t really work. One of the reasons Hillary Clinton’s attacks on Trump were so ineffective is that they mostly went after him for violating norms, so that most of her advertising revolved around the theme of what a bad person Trump appeared to be. But potential Trump voters had already factored that in, and were prepared to vote for him anyway, because they liked what he was promising them. “This is not normal!” has already become a cliché of TV news and late-night comedy, but if normal politics seems to be making your life worse, “not normal” seems like a great alternative.

Questioning Trump’s legitimacy is different from questioning his normalcy. The goal of it is not just to fire up the Democratic base, but to plant doubts in the minds of people who voted for Trump, or people who might consider going easier on him now that he won. By implying that he was installed by forces hostile to the U.S., or that the election was tainted by interference from the FBI, they plant the notion in people’s heads that he won’t deliver what he’s promising. If someone gets the impression that Trump is not going to put America first, that’s going to worry them more than being told he’s not a good person.

It also helps that attacks on his legitimacy seem to inflame Trump more than attacks on his personal character. His angry responses to John Lewis drove the news cycle for several days, contributing to a slump in his already low approval ratings. Conservative political junkies dislike Lewis, accusing him of using the moral authority of the civil rights era to shield himself from criticism. Most people, however, are not political junkies, so what they read in the news is that a widely respected figure has called Trump’s legitimacy into question, and that Trump picked a fight with a civil rights hero just before Martin Luther King Jr. day. If Lewis had criticized Trump’s personality or his behaviour, the ensuing headlines might not have been as beneficial to the Democrats.

The benefits of delegitimization can only go so far. It can’t single-handedly prevent a president from being re-elected, as Trump found out when he led the “birther” movement against Obama. And some are already accusing the Democrats of hypocrisy for doing what they called on Trump not to do when they thought he would lose. The strategy could also backfire on the Democrats if it leads people to hope that Trump can be removed from office. Talk of the Electoral College overturning the election results, which never had any chance of happening, may have created cynicism about the possibility that he could be opposed in any way.

But delegitimizing a president can work by creating suspicion of him, even among people who don’t dislike him personally. Trump’s birtherism may not have dislodged Obama, but it helped convince many people that there was something fishy about him, and that hurt Obama’s would-be successor. Even if Wasserman-Schultz’s hoped-for evidence never materializes, some people will always think there is some chance that it could. Trump benefited from the Bill Clinton presidency, which changed the rules about what types of behaviour could disqualify someone for the job. Now the Democrats are trying to benefit from the new rules Trump created.