Trump has vowed to campaign against Republican members of the Freedom Caucus, but they know voters back home have got their backs no matter what 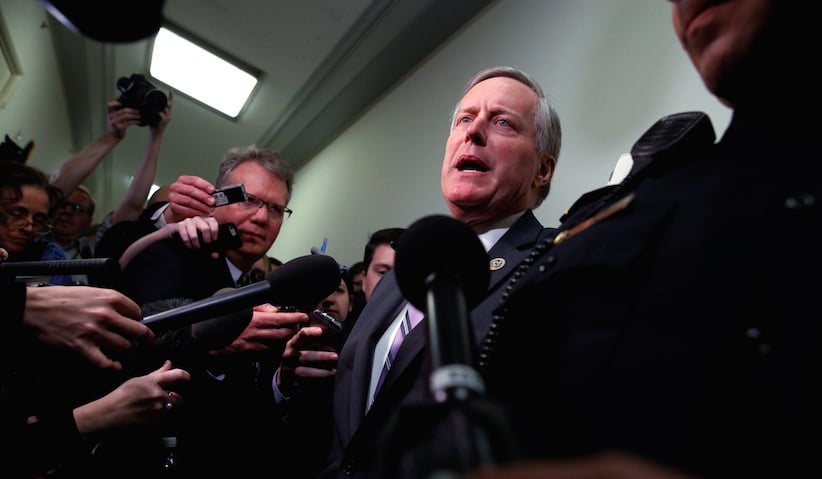 The self-titled Freedom Caucus—white males all, save one Hispanic Mormon who was born in Puerto Rico—are those three dozen stubborn conservatarian Republicans in the House of Representatives who dared to stand up to Donald Trump last month and torpedoed the ‘Un-Affordable Health Care Act’ that the president may or may not have actually read.

Since then, the novice potentate has alternately cajoled, browbeaten, seduced, petted, and shovelled manure on the Freedom-lovers, culminating in an enfilade of Trumpian tweets at the end of March that thundered:

The Republican House Freedom Caucus was able to snatch defeat from the jaws of victory. After so many bad years they were ready for a win!

The Freedom Caucus will hurt the entire Republican agenda if they don’t get on the team, & fast. We must fight them, & Dems, in 2018!

That was the President of the United States vowing to ensure that more than thirty members OF HIS OWN PARTY do not get re-elected next November. Yet three of the leading Caucasian Caucusers attended a think-tank breakfast on Thursday morning, laughing the whole thing off.

“I’m not worried about it,” giggled Justin Amash, Republican of the west-south-central segment of Michigan.

“I don’t take him personally,” chuckled Mark Meadows, Republican of the western slice of North Carolina, which folks down there pronounce as “Ca-lina,” dropping the “ro.”

“The tweets and the statements and the blame doesn’t change the facts,” said Rep. Jim Jordan, Republican delegate from a district in central northern Ohio that continuously has been represented by a Republican only since 1937.

“We held up a bill that only seventeen per cent of the American people said they supported—passing it was not the right thing to do,” said the honourable Amash.

“The countless numbers of Americans who feel that this town has forgotten them—we’re here to remember them,” said Jordan, who was a national-champion wrestler at the University of Wisconsin.

“This is not really about blame or Twittter,” added Meadows, who used to own a small-town sandwich shop.

“When you rush into things,” said Amash, who has been present in the House chamber for more than 4,240 votes in a row, “you make mistakes.”

While the U.S. Senate was melting down this week over the nomination of Judge Neil Gorsuch to the Supreme Court, the House—and even the Freedom Caucus—was being suctioned back down the health-care drain. Rep. Meadows, particularly, was being wooed by The Donald Himself in late-night parleys, and by Thursday morning he was publicly pondering the once-unthinkable: “Why not look at keeping some of the Obamacare subsidies?”

Meanwhile, on Capitol Hill, Speaker Paul Ryan was touting a new proposal to form separate insurance pools for the sickest Americans and, with a straight face, announcing that “this has been a very productive week in the House.” (In truth, the chamber was skulking home for an undeserved two-week break having passed no significant legislation whatsoever since Trump took the oath.)

The Freedom Caucus bears at least some of the responsibility for the House’s impotence. At the root of the clique’s recalcitrance is the fact that there is virtually no chance that any of its members ever will be defeated for re-election, no matter what Donald Trump tweets. They can play the “hell no” card as many times as they like. The folks back home, it seems, are pleased as punch.

“It is playing very well in western North Carolina,” says Ralph Slaughter, a retired businessman and engineer who heads the Republican Party machine in Jackson County, which is represented by Mark Meadows. “Eight out of ten people are extremely pleased that Mark and the Freedom Caucus are responsible for defeating the health care bill. If it had passed, most folks’ premiums would have gone up instead of down.”

“Personally, I think Justin’s the best representative in the country, primarily because he stands for his principles, and he lives with his principles,” says Bob Price, a real-estate appraiser who is the chairman of the Republican Party in Barry County, Mich. in Justin Amash’s riding. “He doesn’t waver just because the wind’s blowing a different direction tomorrow.”

“I’m seventy-seven years old,” Slaughter tells Maclean’s, “and I can remember when here in this state, we had not elected a Republican—other than two governors—in a hundred and forty years. Now, in Jackson County, we are Republican red, right down to the county commissioners. In 2016 we had the best year EVER.”

In North Carolina, Michigan, and almost everywhere else between the liberal coasts, the red tide is self-sustaining. Mark Meadows’s district used to lean Democratic until the state legislature carved the leftist city of Asheville out of the riding. (The same can be said for the Congressional Black Caucus, whose members often serve their gerrymandered constituents until retirement, death, or longer.)

“Is the age of compromise dead?” Price is asked, out in Freedom Caucus country.

“My feeling is that what most people around here think about compromise is that it’s never really a compromise at all—it’s just another step to the left,” he replies. “It’s never a step the other way. We should never compromise when the choice is between bad and REALLY bad, at least to me.”