Why Donald Trump plans to show up early in Cleveland

'I want to watch. It is going to be very exciting,' Republican says of his wife's convention speech on Monday night 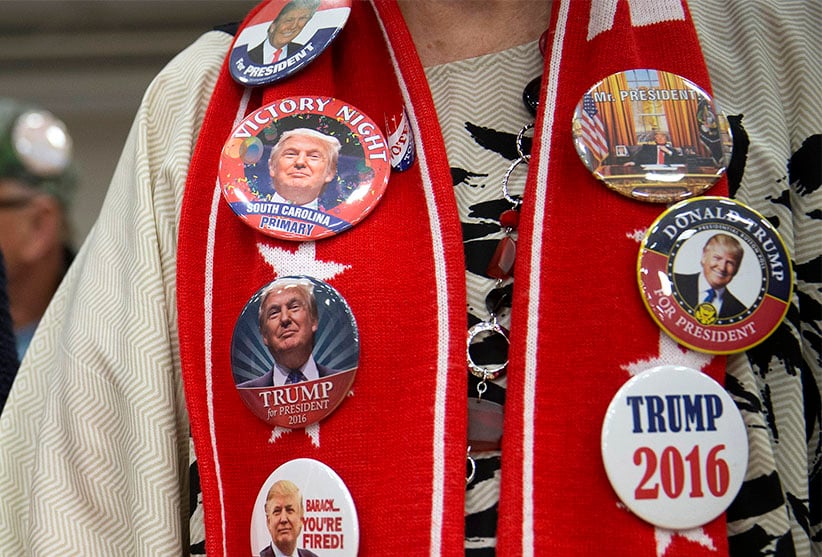 CLEVELAND — Braced for uncertainty and hoping for unity, Republicans on Monday prepared to kick off their convention to crown Donald Trump as the nation reeled from another outburst of violence and dissident delegates angled for a last-ditch chance to deny the front-runner the nomination.

True to form, Trump himself provided the first surprise of the week, announcing Monday morning he was headed Cleveland later in the day to watch his wife Melania take the spotlight for the first night of speeches.

“I will be there,” Trump said on Fox News. “I want to watch. It is going to be very exciting.”

It was earlier-than-expected arrival for a man who has shown little interest in tradition with his nominating show. But the next four days would undeniably be Trump’s moment — a week at the pinnacle of American politics that few could have imagined when the New York billionaire entered the race a year ago.

The lineup of speakers would be aimed at showing off “Trump the man,” his advisers said. It would also highlight Trump’s contentious candidacy. Many party leaders and rising stars have steered clear of Cleveland. Ohio Gov. John Kasich, a vanquished Trump rival, had no plans to step foot inside the convention.

Monday’s opening night speeches included an odd mix of politicians — Sen. Joni Ernst of Iowa and Sen. Jeff Sessions of Alabama — as well as immigration advocates, a marine who fought in the Benghazi attack and entertainers, including actor Scott Baio and Willie Robertson, star of Duck Dynasty.

The theme was “Make America Safe Again” from a self-described law and order candidate.

But the first act Monday was a last-gasp for the effort to stop Trump from sealing the deal. Delegates were due to vote Monday afternoon on the rules that will govern the convention week, and insurgent delegates circulated a petition on Monday trying to force a state-by-state vote — a move that could disrupt floor proceedings even if they fail.

Eight things to watch at the Republican National Convention

Late Sunday, 14 insurgent members of the convention rules committee emailed their fellow GOP delegates asking them to oppose the rules that panel approved, saying its proposals included “abuses of power.”

Trump’s opponents want to change a rule that requires delegates to vote for the candidate to whom they were committed after state primaries and caucuses. Trump’s nomination is essentially automatic under the current rules, because he has far more than the 1,237 delegates required to win.

Some rebellious delegates threatened to walk out if they are thwarted. Should that occur in significant numbers, it could leave television cameras panning across empty seats.

“We won’t sit around and coronate a king,” said Colorado delegate Kendal Unruh, who like many insurgents has backed vanquished presidential contender Sen. Ted Cruz of Texas.

Trump’s wife and kids to speak at Republican Convention

The roll call vote on the nomination was expected Tuesday, with Trump scheduled to close the convention with an acceptance speech late Thursday.

Trump would gain the nomination at a time of crisis and tumult at home and abroad, punctuated Sunday by the deadly shooting of three police officers in Baton Rouge, Louisiana.

Earlier this month, the slaying of a black man in Baton Rouge by white officers led to protests nationwide and heightened concerns about the state of race relations in America. President Barack Obama, responding to the shooting Sunday, noted that the incidents had come just before political conventions that tend to involve “overheated” rhetoric. Obama urged both parties to avoid “careless accusations” intended to score political points.

“Everyone right now, focus on words and actions that can unite this country, rather than divide us further,” Obama said.

But Trump, insinuating that Obama held some responsibility, earlier blamed a “lack of leadership” for the Baton Rouge shootings and added on Twitter, “We demand law and order.” Democrat Hillary Clinton, meanwhile, echoed Obama’s words in a statement urging Americans not to “turn our backs on each other.”

Even before the latest violence, Trump’s choice of Indiana Gov. Mike Pence as his running mate had been overshadowed by a deadly truck attack in France and an attempted coup in Turkey.

Cleveland hoped it would escape any violence of its own.

Protests are widely expected outside the Quicken Loans Arena, where the city’s police chief, Calvin Williams, said Sunday it seemed everyone was arriving to “exercise their First Amendment rights.”

His blunt tone and aggressive approach to immigration and terrorism have done the same with key segments of general election voters: women, blacks and Hispanics, especially.