Why Donald Trump wants to 'rebuild' the military

As the president requests a hike in defence spending, the military-industrial complex meets a paranoid White House 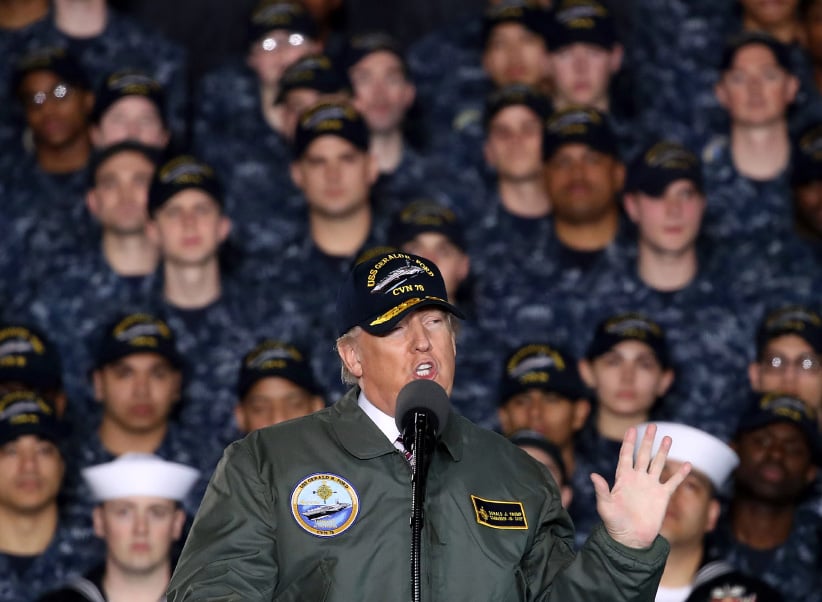 U.S. President Donald Trump speaks to members of the U.S. Navy and shipyard workers on board the USS Gerald R. Ford CVN 78 that is being built at Newport News shipbuilding, on March 2, 2017 in Newport News, Virginia. The USS Ford is powered by two Nuclear reactors and is 1, 092 feet long with a 134 foot beam and can carry over 75 aircraft. (Mark Wilson/Getty Images)

Every tin-pot dictator and authoritarian thug drapes himself in military regalia at one point or another. There’s something about earth tones and brass and an appeal to bellicosity that seems to command, or at least tries to command, authority, even while it betrays a sense that the leader playing dress-up desperately lacks it. In his own way, Donald Trump, the civilian commander-in-chief of the world’s most significant military, echoes this tradition in the United States.

On Feb. 27, Trump announced that he hopes to increase U.S. defence spending by $54 billion USD—roughly a 10 per cent jump from the current and prodigious $596 billion that America spends on the amorphous end of security. Days later, the president visited a state-of-the-art aircraft carrier, the next-generation USS Gerald Ford, to stump for the boost.

A glance at historical military spending in America reveals fluctuations over time, but the annual totals are always globally significant. The amount the United States spends on keeping itself—and, admittedly, others—safe has always been, well, robust.

American defence spending in 2015 accounted for 36 per cent of all such spending worldwide, and more than the next seven highest spenders combined. As a share of gross domestic product, the United States shells out 3.3 per cent on defence, down from 5.6 in 1988—the year before the fall of the Berlin Wall and the rapid thawing of the Cold War. In recent years, U.S. military spending has declined in both absolute terms (the country is spending less than previously) and relative to the rest of the world. That drop is driven in part by the winding up of wars in Iraq and Afghanistan, and also by congressional struggles over the budget, which have ultimately led to a cap on spending that Trump’s increase would exceed.

Those are some of the facts. I’ll leave the economics of this decision to economists, (most) of the defence policy to security experts (some of whom would disagree with my argument here), and instead focus on the politics of a substantial boost in military spending. Trump campaigned on making government “smaller” and more “accountable” (how novel); that commitment comes as no surprise to anyone who is acquainted with the president’s chief advisor, the rumpled shirt of a man named Steve Bannon. The erstwhile Breitbart editor is a former (and perhaps current) Leninist who has suggested that Trump’s cabinet choices were tapped with an eye to deconstructing government agencies and regulations.

Steve Bannon is Trump’s closest advisor; and while he looks like a piece of day-old spanakopita, Time magazine recently wondered aloud whether he is the second most powerful man in the world. Bannon holds a seat on the National Security Council and was the chief architect of the travel ban. Just last year, he suggested there was “no doubt” that the United States and China would end up in a war in the coming years. As if war with the world’s most populous country and second-biggest defence spender isn’t enough, he also believes another serious war in the Middle East is inevitable. One wonders how the man can drift off to sleep at night.

I do not believe that Donald Trump stands for or believes in very much other than his own aggrandizement and enrichment. He’s an empty vessel. Or perhaps it’s better to think of him as a blank canvas. If he is indeed an off-white surface, Bannon is the oil and enamel paint waiting to turn America and the world into a Jackson Pollock painting. That ought to have us very worried, indeed.

When Trump’s courtiers whisper to him that America is under siege, that the country is no longer “great,” that it should come first, that war is inevitable, and that the only way to respond to the grand old republic having its ass handed to it time after time is to “invest” in the military, then you’d better believe that he’s going to demand that Congress pony up the cash. Frankly, I’m surprised he’s only asking for $54 billion more.

Last December, the Washington Post reported that the Pentagon had “buried” a study that revealed the department had spent $125 billion on “bureaucratic waste.” In 2012, lawmakers pressed the Army to purchase new tanks for $181 million despite the fact that over 2,000 M-1 Abrams tanks in California were lounging around all day, baking in the sun. In 2013, Congress forced the military to keep assets it no longer wanted. One might conclude from this that there are, let’s say, opportunities for spending reduction within the Department of Defense. But of course there’s more to it than that.

MORE: Donald Trump is a threat to freedom of speech

Dwight Eisenhower might advise Trump differently than Bannon and others have on defence spending. As his time as commander-in-chief came to an end, the 34th president and former supreme allied commander in Europe, no dove, cautioned that America had to “guard against the acquisition of unwarranted influence, whether sought or unsought, by the military industrial complex.” Why? The man who had seen so much carnage in Europe and North Africa knew that “the potential for the disastrous rise of misplaced power exists and will persist.” Eisenhower was worried about the rise of a massive, permanent arms industry wed to politicians.

Today, the military-industrial complex and the political supplicants who enable it are joined by a president with an insatiable need for attention and regard, and his chief advisor, an End Times soothsayer with his own agenda. The unstoppable force and immovable object now share a trajectory, as Trump gets to imagine himself as Napoleon Crossing the Alps in the gaudy neo-classical mold. Of course, in the painting by Jacques Louis David, Bonaparte is on the horse; today, as the law of first as tragedy, later as farce holds, Trump is the horse, while Bannon is the rider.

If Congress approves an increase in defence spending, we might expect to see similar responses from other major and growing world powers such as Russia and China. Just days ago, Trump said that America had “fallen behind on nuclear weapons capacity,” and dismissed his country’s newest arms reduction treaty with Russia, New START, as a bad deal. His comments prompted concern from Russia. One might imagine that China and perhaps North Korea felt the same way. Plainly, these nations are already pursuing defence developments. Is the answer to ramp up U.S. spending in response? And is Trump the president who can be trusted to oversee that increase?

State actions have consequences, and countries who fret in particularly belligerent ways over global security risk creating or exacerbating the sorts of problems they imagine as requiring a robust security response in the first place. Global security is a serious matter and defence spending is necessary. But the vainglorious attempts of an uneasy and insecure president to portray strength are now meeting the paranoid fantasies of his closest advisor—not to mention the military’s predictable requests for increased funding, perhaps buoyed by so many retired generals rattling around Washington, in the White House, Congress, federal departments, and lobbying firms. The world is watching and will respond accordingly, which means that if this particular $54 billion boost prompts a provocation of America’s rivals, they might be some of the most costly dollars America ever spends.