Why Donald Trump will always be at war

Americans live as if they're constantly at war, constantly under some degree of threat, and therefore always at the ready to defend themselves 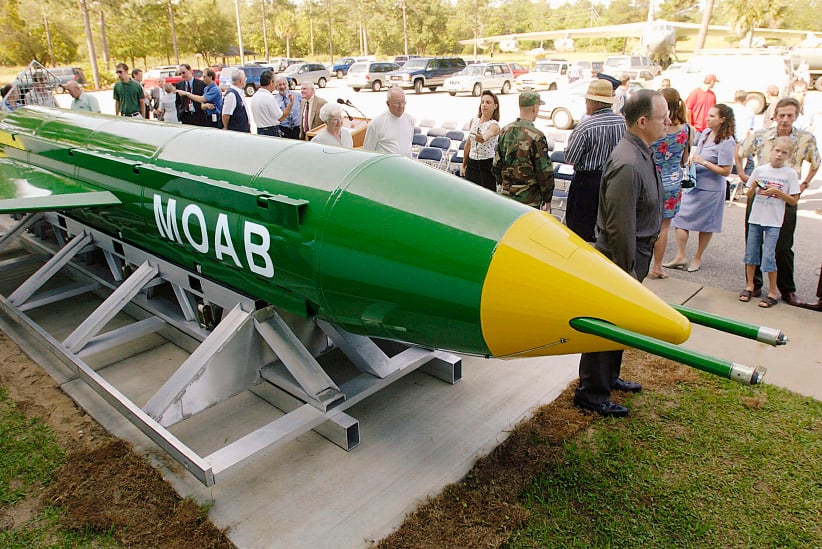 In this May 2004 photo, a group gathers around a GBU-43B, or massive ordnance air blast (MOAB) weapon, on display at the Air Force Armament Museum on Eglin Air Force Base near Valparaiso, Fla. (Mark Kulaw/Northwest Florida Daily News/AP/CP)

Last week, upon launching a cruise missile strike against Syria, Donald Trump “became president.” That’s the narrative that emerged from mainstream opinion-makers in the United States, at least, and proof positive that it remains the case that no man in America becomes president before he blows something up.

Perhaps that’s unfair. Since the end of the Cold War, the United States has played the part of global hegemon—the world’s leading power. In this century and a significant part of the last one, this job has included ensuring global security, stabilizing the world economic system, and setting trends in the arts, culture, sport, and so on. That’s the tl;dr version of the story, at any rate.  Of course, there are important exceptions to that, but let’s set those aside for now.

Part of the hegemon’s job is to manage threats to global security. It’s not by accident that the United States has hundreds of military bases around the world and has engaged in routine military intervention all over the planet since the 1940s, including operations that have been acknowledged and (surely) plenty of clandestine affairs. Technically, America hasn’t declared war since 1942, as part of a series of declarations between 1941-1942 during the Second World War, but they’ve engaged in plenty of combat nonetheless.

It’s no surprise, then, that President Trump has approved military strikes and raids as commander-in-chief, including one in Yemen in January. The question isn’t if Trump will have to use U.S. military force around the world, but where will he use it? And how much of it will he use? With the hopelessly sanguinary conflict in Syria continuing with no end in sight, nuclear threats from North Korea, an increasingly assertive Russia, a civil war in Yemen, chronic instability in Iraq and Afghanistan, and several other global security challenges, one can be forgiven for worrying that the answers to these questions might be: “all over the place” and “plenty.”

For context, recall that under President Obama, the Central Intelligence Agency launched 100 strikes by the end of 2009 and the numbers climbed from there, with plenty of so-called “collateral damage”. And yet, Obama resisted deep intervention into the civil war in Syria despite mass suffering and the humanitarian crisis that has accompanied Syrian President Bashar al-Assad’s sustained assault on his own people. Trump’s intervention in response to a gas attack—which in a born-again moment changed the president’s mind about attacking the Russian-backed dictator—was measured, as far as these things go. In essence, he fired off some expensive fireworks, dented a shed, and “proved” to the world that he is no Russian puppet.

RELATED: Why Donald Trump wants to ‘rebuild the military

Perhaps unsurprisingly, Syrian war planes left the base hours after the attack to conduct an airstrike on the same town Assad had earlier gassed. If the Trump strike was meant to send Assad a message, it’s possible he didn’t receive it—or didn’t care. Meanwhile, the U.S. military messaging continues: a naval strike group led by the aircraft carrier USS Carl Vinson sailed near the Korean peninsula following North Korean missile tests, which prompted a perfunctory if unsettling warning from Pyongyang.

Americans live as if they’re constantly at war. The rise of the surveillance state, domestic and global security threats, and vulnerable U.S. interests overseas have brought about a kind of security homeostasis in which the body politic is constantly under some degree of threat and therefore always at the ready to defend itself. David Byrne was right: “This ain’t no party/ this ain’t no disco/this ain’t no foolin’ around“—and this is the environment into which Donald Trump has entered as both president and commander-in-chief.

Consequently, Americans and individuals around the world, affected as we are “by every twitch and grunt” of the United States, have reason to be concerned. Trump’s mercurial personality and obvious lack of preparation for the job he’s found himself in are threats to U.S. and global security—again, this ain’t no foolin’ around. Lives are at risk. The fate of nations are at risk. The global order is at risk. And while there are plenty of reasons why international relations might beg for a re-ordering in the 21st century, Donald Trump is not the leader who ought to be leading the effort.

It appears that Trump is deferential to men in uniform (and to his daughter?). In January, Trump changed his mind on the use of torture, saying he would leave the decision to General James Mattis.So far, Trump has shown restraint—and even prudence—when it comes to military activity, which suggests that he’s listening to more level-headed folks than when it comes to domestic policy. But it’s early days as his administration approaches the arbitrarily significant 100-day mark, and global security is only going to become more complicated as time goes on—at the very least, there’s no evidence that suggests matters are improving—at a time when Trump and his team have done little to signal that they have a grand strategy for dealing with current challenges (especially Syria).

We are also left with the question of who’s in charge when it comes to military affairs. Who has the ear of the president? To whom is he ultimately going to defer in the long run? These questions reveal a kind of catch-22: while one might prefer to have a civilian ultimately in charge of the military, one might also prefer that it not be Trump. Yet the alternative is to have the generals calling their own shots, or else either noted military strategist Ivanka Trump or lunatic millenarian conspiracy theorist Steve Bannon.

None of these options are particularly appealing, of course. While folks can protest, write or call their representatives, or engage in other forms of resistance, there is little that can be done while the major players make their decisions and shape the future, while the rest of us hope that some wisdom will emerge from the chaos. That’s life during wartime.