Why some Democrats have yet to cheer Hillary Clinton 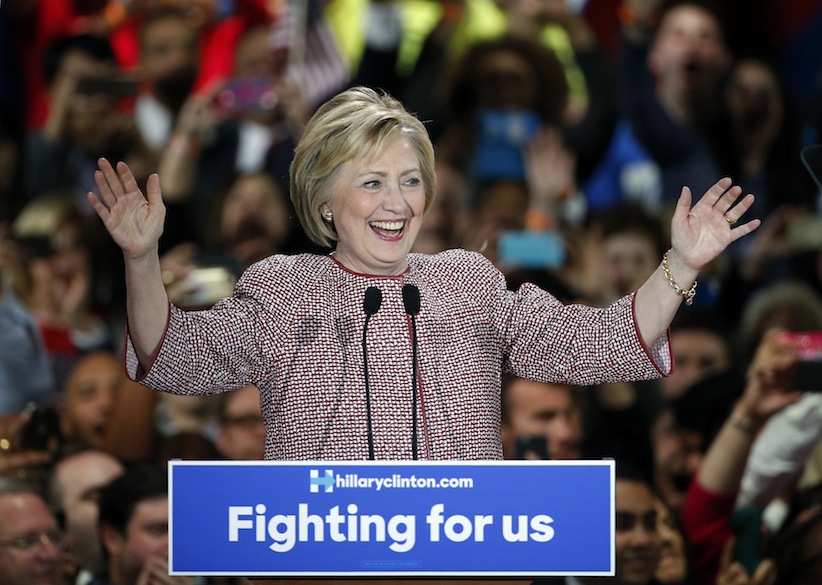 OAKLAND, United States — Hillary Clinton may be days away from becoming her party’s presumptive presidential nomination, yet her name still gets booed at some Democratic rallies.

Skepticism about Clinton ripples through the monster lineups spilling down multiple city blocks as people wait for hours to see her opponent.

One firefighter completed a 24-hour shift, then lined up for six more hours to see the senator at a church; when that was over she headed across town where an even longer queue awaited his evening rally.

“Hope springs eternal,” said Jeanne Andrews, an Oakland firefighter, of her candidate’s chances. “All I can say is that you never know what will unfold in the days to come. You have to soldier on.”

It includes a sizable deficit of elected delegates that’s even more towering among the so-called superdelegates of party officials. There’s only one chance left to catch up, next Tuesday, with the last big votes in California and New Jersey.

It’s apparently so insurmountable that it’s prompted an intervention from an unlikely source. California’s progressive governor Jerry Brown refused to endorse the more centrist Bill Clinton in 1992, but now he says it’s time for Democrats to rally around Clinton’s spouse, because she’ll be the nominee.

Yet people at Sanders rallies see two paths to victory. If these roads had names, they’d both start with the letter S: Server Drive and Superdelegate Street.

Several people interviewed cited Clinton’s email controversy. A criminal investigation by the FBI is underway on Clinton’s use of a home-made server for government work.

“You don’t want your nominee, whoever it is, to be indicted,” says Christopher Cook, a progressive writer and Sanders convention delegate.

“I’m not saying it should be the determining factor. But that’s a very serious consideration… It means something. What it shows is an abuse of power and lying.”

Clinton misled the public on different occasions, according to a newly released government audit, when she said she’d turned over her emails for official record-keeping and when she said the unusual setup had been allowed.

He is saying superdelegates should pause to consider her electoral vulnerability. Especially if she limps into the convention as a loser, with a loss next week in California and with polls showing her performing worse than Sanders against Donald Trump.

“I’m hoping some of those superdelegates will come to their senses and notice what’s happening, notice the incredible lead Bernie Sanders has over that lunatic Donald Trump,” said Kate Tanaka, sitting in the pews of an inner-city church where Sanders spoke.

“Only a maniac, suicidal party would nominate someone like Hillary Clinton who doesn’t have a good, strong lead over Donald Trump.”

Sanders supporters have repeatedly called the primary system unfair. But it appears their only paths to victory might involve intervention from the superdelegates or the FBI.

Clinton has won several more states than Sanders. Yet she’s being pushed to the wire by a gruff-talking 74-year-old socialist who jokes about his uncombed hair and $99 suits.

Some polls even show him catching up in California.

So on a sunny evening this week, people endured an hours-long, half-kilometre lineup to hear the man speak against the greed of billionaires, money in politics, and the American failure to provide services other countries take for granted — like single-payer health care and free tuition.

When he did, a chorus of boos rang out from the public square. Not from its entire crowd, or even most of it — but from a large minority, at a Democratic party rally, one week before Clinton likely becomes the party’s de-facto nominee.

“She’s getting very nervous,” Sanders said. “I don’t want to add to her anxiety. But if you promise not to tell her: We’re going to win here in California.”

The polls show a tightening in California, although not a Sanders win. They’re also tightening in general-election matchup between Clinton and Trump. A main reason: most Republicans are united behind Trump, while many Democrats apparently tell pollsters they’re not yet ready to stand with Clinton.

This makes one especially happy billionaire.

“I don’t like to see people having difficulty,” Trump said Tuesday. “But if anybody has to have it, let it be them (Democrats).”