Will coronavirus cancel the presidential primaries?

U.S. Politics Insider for March 16: Biden and Bernie held a debate in advance of primaries that may not even happen for a while 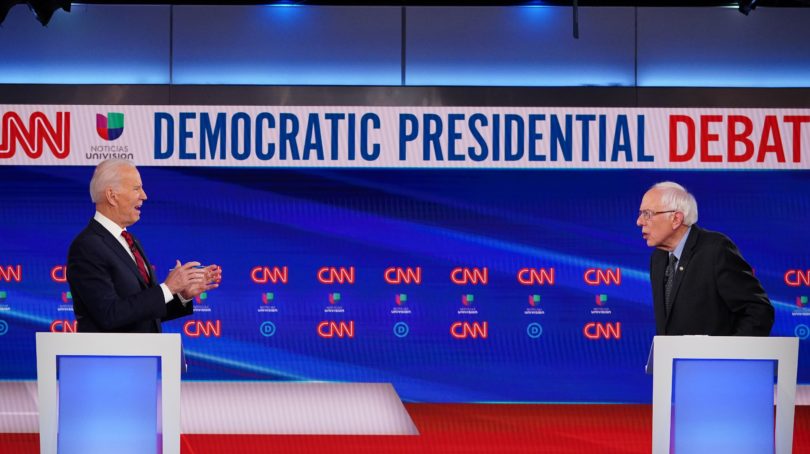 Will elections be cancelled?: What used to be considered a far-fetched scenario — the postponement or cancellation of elections — is already starting to become real thanks to the coronavirus pandemic, which in only a few days has transformed American society. Louisiana was the first state to announce that it was postponing its primary elections, originally scheduled to take place Saturday, April 4, now tentatively rescheduled for June 20. Next came Georgia, which has moved its primary from late March to mid-May. States that were scheduled to vote this Tuesday, March 17 have announced their intention to go ahead, but there are already calls for switching to vote-by-mail. Bernie Sanders mentioned on Sunday night that he was “not sure it makes a lot of sense” to hold Tuesday’s primaries as scheduled, at a time when many states are beginning to crack down on large gatherings.

The coronavirus debate: CNN and Univision’s debate between Joe Biden and Bernie Sanders wasn’t cancelled on Sunday night, though there was of course no invited audience. A lot was riding on the debate, which was seen as Sanders’s last chance: people in the Sanders camp were hoping that Biden would finally slip up in a one-on-one debate and reveal himself as unfit to lead. But the debate didn’t quite provide that moment, instead featuring duelling slip-ups on the biggest issue of the moment: while Biden at one point referred to COVID-19 as “SARS,” Sanders referred to it at one point as “the ebola crisis” (Biden mentioned the actual ebola virus but called it “That thing that happened in Africa”).  Biden also pledged that he would pick a woman as his running mate, while Sanders replied that “in all likelihood” he would do the same. The candidates sparred a bit over Biden’s past record compared to his current positions (“suddenly today, Joe Biden is a free-spending socialist,” Sanders joked), but the disqualifying moment didn’t really arrive.

Sanders and Biden on coronavirus: In advance of their debate, CNN invited Joe Biden and Bernie Sanders to contribute opinion articles on what they consider to be the main lesson of the epidemic. The result seemed to sum up the thrust of both campaigns so far: Sanders argued that it proves the U.S. needs a universal health care system like most other developed nations (“we spend twice as much per capita as the people of Canada and other major countries, while 87 million of us are uninsured or underinsured”), while Biden praised the work of establishment Democrats such as Nancy Pelosi, and said that the main problem is that Donald Trump is president.

Biden tries to borrow progressive ideas: Preparing for the happy day when people care about other issues again, Joe Biden is quietly trying to reach out to progressive voters—which is to say, voters who cast their ballots for anyone but him. In advance of the debate, the frontrunner announced his support for two plans which were associated with his progressive rivals. On Sunday, he said he supported free admission to public colleges and universities for anyone who isn’t rich, moving closer to Bernie Sanders and his position on free college. Two days earlier, Biden declared his support for Elizabeth Warren’s plan to make it easier for people to declare bankruptcy, including allowing student loans to be discharged that way. Some of Warren’s ideas on this subject were seen as an attempt to overturn a 2005 bill that made it more difficult for people to declare bankruptcy, a bill that Biden advocated and voted for.