Will Donald Trump swear on the Bible?

Most U.S. presidents have sworn on a Bible of their choosing when taking the oath of office. But it's not required. 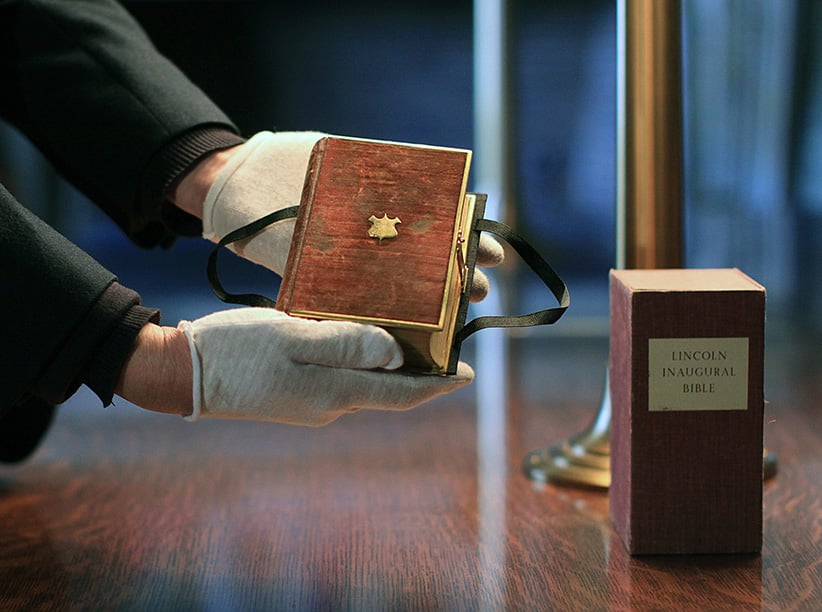 Curator Clark Evans displays the burgundy velvet, gilt-edged Lincoln Inaugural Bible at the Library of Congress Tuesday, Dec. 23, 2008, in Washington. President-elect Barack Obama will take his oath of office on the Bible Jan. 20, becoming the first president to use it since Abraham Lincoln at his swearing-in on March 4, 1861. (Lauren Victoria Burke/AP/CP)

Do presidents have to swear in on a Bible? No—but the list of those who haven’t is pretty short.

Theodore Roosevelt didn’t have a Bible when he was sworn in as president in 1901, though his inauguration was less than celebratory; after all, President William McKinley was shot a week earlier and died of his wounds on Sept. 14. (Roosevelt was sworn in as the new president later that day in Buffalo, N.Y.)

John Quincy Adams*, the sixth president of the United States, also didn’t swear on a Bible for his inauguration but rather he took the oath on a book of law. It is also worth noting that Adams also broke tradition by being the first president sworn in while wearing long trousers and not knee breeches.

And while Article VI of the U.S. Constitution says that “no religious test shall ever be required as a qualification to any office or public trust under the United States,” the vast majority of presidents do indeed swear their oath on a Bible.

What kind of Bible? It’s the president’s choice. George W. Bush used the family Bible his dad once used to be sworn in as president before him. In 2009, Barack Obama took an oath on the same Bible Abraham Lincoln used for his swearing-in, from 1861. For his second go-around, Obama used both the Lincoln Bible and a Bible once used by Martin Luther King Jr.

So will Trump swear his oath on a Bible? Very likely. Though who’s to say he won’t show up and give the oath of office with his right hand on The Art of the Deal?