By Jonathan Lemire and Nicholas Riccardi, The Associated Press September 13, 2016 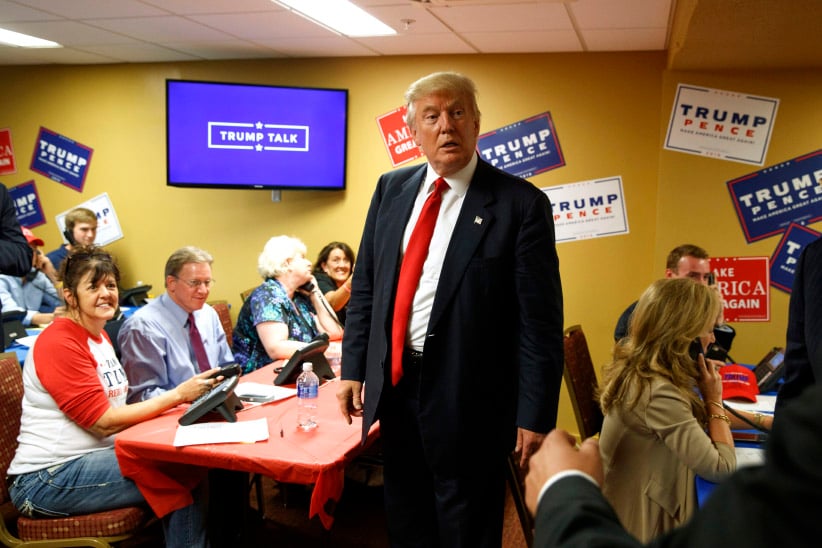 Trump will unveil the plans in a speech in a politically critical Philadelphia suburb as he tries to build his appeal with more moderate, independent voters — especially women. Child care is one of the biggest expenses many American families face, surpassing the cost of college and even housing in many states.

Trump had said little about child care until his daughter, Ivanka, surprised many at the Republican National Convention in July by promising to make it a centerpiece of a Trump administration. During a rally in Des Moines Tuesday afternoon, Trump credited Ivanka Trump for his action on the issue. “She is the one who has been pushing for it so hard: ‘Daddy, Daddy we have to do this.’ She’s very smart, and she’s right,” the candidate said.

As part of his speech in battleground Pennsylvania Tuesday, Trump is expected to propose guaranteeing six weeks of paid maternity leave to employees whose employers don’t offer leave already. The campaign says the payments would be provided through existing unemployment insurance — though it has yet to spell out how the system would cover those costs.

Trump’s Democratic opponent, Hillary Clinton, has called for 12 weeks parental leave for both mothers and fathers paid for by taxes on the wealthy.

Trump in August proposed reducing child care costs by allowing parents to fully deduct the average cost of child care from their taxes. He is expected to flesh out that plan Tuesday, including expanding the deduction to include costs associated with caring for elderly dependent relatives.

The deduction would apply only to individuals earning $250,000 or less, or $500,000 or less if filing jointly. But because Trump’s proposal is a tax deduction rather than credit, its greatest benefits would go to affluent households. More than 40 per cent of U.S. taxpayers don’t make enough money to owe taxes to the federal government, meaning they would not benefit from a deduction. Lower-income earners would receive child-care spending rebates through the existing Earned Income Tax Credit, the campaign said.

Trump is also expected to propose incentives for employers to provide child-care options at work. But his proposals to prod businesses and communities into providing childcare and other services are anathema to conservative orthodoxy. Trump has previously touted similar programs at his hotels and golf clubs — but The Associated Press has reported that those options are offered to guests and club members, not employees.

The timing, location and subject matter are no coincidence. Democratic presidential candidates have won Pennsylvania since 1992, but Trump hopes to flip to win the White House in November. And Trump has been trying to soften his image among college-educated women who have been reluctant to support a candidate who has made many derogatory remarks toward women.

The late timing raised some eyebrows among skeptics.

“Given the late-breaking nature of this policy proposal it’s hard not to feel like it’s a pretty naked attempt to speak to women voters less than 60 days before the election,” said Vivien Labaton of Make It Work Action, which pushes for increased child care access. “If he was really intent on addressing the needs of women and children, the proposals would look quite different.”

Trump will also lay out plans to create “Dependent Care Savings Accounts” that would allow families to set aside money to look after children or elderly parents. The accounts would allow tax-deductible contributions and tax-free appreciation and could be used to pay for child care, after-school programs and school tuition. To help lower-income parents, the government would match half of the first $1,000 deposited per year.

For elderly dependents, the accounts could be used to help pay for services including in-home nursing and long-term care.

Carmel Martin at the liberal Center for American Progress said the new savings accounts would create a potential tax shelter for wealthy people and that Trump’s proposals remain tilted to the rich because the low-income child-care rebates top out at $1,200.

“It would definitely work for Ivanka, but not for most American families,” Martin said.

Trump aides did not address how much the proposals would cost, but insisted the extra spending would be offset by economic growth.

Clinton, meanwhile, proposes that no family should spend more than 10 per cent of its income on child care.

To achieve this, Clinton would seek to boost federal spending on child-care subsidies and provide “tax relief for the cost of child care to working families.” Those benefits would be offered on a sliding scale based on need.

Since announcing the plan in May, Clinton has offered few details, including how it would be funded beyond raising taxes on wealthy Americans. On Tuesday, her campaign released a statement slamming Trump’s proposals. “The lack of seriousness of this proposal is no surprise given his history of disrespecting women in the workplace and the fact there’s no evidence he ever provided paid family leave or childcare to his own employees,” Clinton aide Maya Harris said.

“You haven’t heard the past few Republican nominees talk about child care a lot,” she said.

Jill Colvin in Washington contributed to this report.