Will Trump’s hotels finally bring him down?

Allen Abel: The president’s hotel in Washington draws crowds of gawkers and hangers-on—and this week, a lawsuit that points to bigger troubles 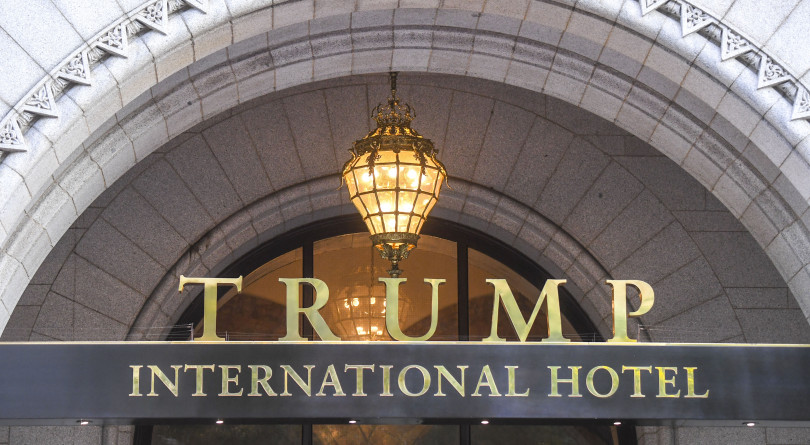 Tom Myers, who used to be in tires, was staring through the glass at the Brioni suits. It was early on Friday the 13th at the Trump International Hotel in Washington and Myers, a patriot from Richmond, Va., in a Chinese-made “FBI” ball cap, imported Nike sneakers, and a T-shirt that was stitched in Honduras, was accompanying his wife to the 40th-anniversary conference of the Concerned Women for America, an organization devoted to “bringing Biblical principles into all levels of public policy.”

While the Concerned Women convened their meetings, their men were left to wander the Trump Hotel premises, and to dream of pairing the Skuna Bay Salmon (US$32) with The Benjamin Ice Cream Sundae ($45) and washing it all down with a shot of 50-year-old Macallan at $6,500 a dram.

The bespoke boutique wasn’t open yet, saving Myers a couple of thousand dollars and saving Donald Trump—for at least another day—from being thrown out of office for making money off his empire.

“Do you think that Donald Trump should be impeached for making money from his own businesses?” a vagrant wondered, gawking at the gawkers at the hotel that may bring a president’s downfall.

“You can’t punish a man for being successful,” said Myers.

READ MORE: Don’t count out Andrew Yang, the populist technocrat who wants to be president

The previous evening, 10 Democratic presidential contenders had bristled and slashed for two hours in Houston without ever uttering the word “impeachment.” But now an appeals court in New York City had just allowed a lawsuit against the incumbent – one of many regarding the same supposed misdemeanour — to proceed, ruling in a case brought by “Restaurant Opportunities Centers United” that “the president’s ownership of hospitality businesses that compete with them will induce government patrons of the hospitality industry to favor Trump businesses over those of the plaintiffs so as to secure favorable governmental action from the president and executive branch.”

At issue was the president’s alleged profiteering from his eponymous hotels, golf courses, and resorts at home and abroad in violation of the clauses of the Constitution of the United States that prohibit federal officials in general, and the president in particular, from accepting “any present, Emolument, Office or Title, of any kind whatsoever, from any King, Prince, or foreign State” or “any other Emolument.”

“Impeach the crook over the emoluments!” numerous House Democrats roared this week, even though an Aug. 28 poll by USA TODAY and Suffolk University found 57 per cent of respondents rejecting impeachment with only 37 per cent in favour.

“What the heck is an emolument?” head-scratched the benighted masses.

“The President gave all his businesses to his family,” Myers, the former tire salesman, shrugged at the Trump International. Indeed, that is exactly what  Trump promised to do, back in 2017. But here was The Donald recently urging the G7 to hold its next meeting at his country club in Miami, and here was Vice President Mike Pence detouring 300 kms to rest his head on the plumpy pillows of a Trump property in Ireland, and here were sundry Air Force fliers partaking of the president’s hospitality at one of his resorts in Scotland (and paying for it from the public pocketbook), and those didn’t exactly sound like the actions of a man who had washed his hands of lucre.

(The judges of that New York appeals court are not the only ones who are skeptical that Trump actually has transferred total control of his entire global imperium to his offspring. You may recall Trump’s own lawyer telling reporters a week before his inauguration that ““President Trump can’t un-know he owns Trump Tower.”)

So once again the “America-hating Left,” as the president calls it, having aroused little heartburn with the Mueller Report, was off to the races, seeking a crime to fit the punishment.

The White House was doing little to stanch the supposed stench. “SPOTTED,” noted Politico on Friday morning, “Ric Grenell and Robert O’Brien — close friends from California, both said to be candidates to be the next national security adviser — having breakfast at the Trump hotel in D.C.”

“It is inherently offensive to fundamental notions of democracy for a president to profit from his office,” Elie Honig, a former federal prosecutor said on CNN.

Still, Honig admitted, “While the Constitution defines the term ‘emoluments,’ it does not provide any specific remedy for a violation. Congress would need to pass a new statute — and the President would need to sign it.”

But at the Trump International Hotel on Pennsylvania Avenue there was little support for firing the man who signs the cheques; “the greatest job creator that God ever created,” as Trump once described himself.

A lobby-lounge steward from Cameroon recalled meeting the president one day in the soaring, gilded atrium. “Everybody else was standing around staring at him, but I kept working hard and doing my job,” the attendant said on Friday morning. “He came up to me and said, ‘I LOVE people who work hard,’ and he gave me deux-cent dollars.”

“Only two hundred?” a reporter erupted. “He’s a billionaire!”

“That’s all he had in his pocket,” the Cameroonian said. “If he had more, I know he would have given me tout.”

“America,” he sighed, “is the country of opportunity. I am very happy to work for Mister Trump. There is no discrimination.”

“Why do you think so many people hate him?” the immigrant was asked.

“Because they do not know him as I do,” he said in the Trump Hotel lobby.

At noon, the Concerned Women for America gathered to munch their lunch in the Presidential Ballroom and to hear a ringing speech about religious freedom from Mike Pompeo, the Secretary of State and, in this case at least, a “government patron of the hospitality industry.”

“This is such a beautiful hotel,” Pompeo said, laughing, when he took the stage. “The guy who owns it must be very successful.”