Clinton delegated the task of fact-checking to her massive campaign team. Her political neophyte opponent took on the task himself, and made a hash out of it. 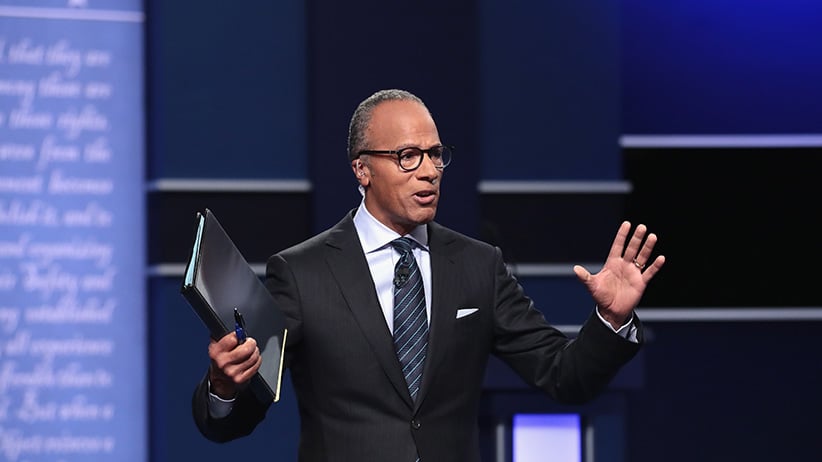 Moderator Lester Holt speaks ahead of the Presidential Debate at Hofstra University on September 26, 2016 in Hempstead, New York. The first of four debates for the 2016 Election, three Presidential and one Vice Presidential, is moderated by NBC’s Lester Holt. (Drew Angerer/Getty Images)

For those Americans and viewers hoping for live fact-checking intervention during the first presidential debate, there it was throughout.

Its name was Donald Trump.

It should be no surprise that the probable all-time champion trigger of truth-meter red alerts was a shoddy truth detector. In fact, he did muse this year about negotiating down the U.S. national debt, as Hillary Clinton charged. In fact, he did once say, “The concept of global warming was created by and for the Chinese in order to make U.S. manufacturing non-competitive.” (This sentence still lives on his Twitter account.) Until that debate, Trump hadn’t done much to refute former Miss Universe Alicia Machado’s allegations he called her “Miss Piggy” and “Miss Housekeeping,” though he had admitted to the New York Times he had indeed pushed his pageant queen to lose weight.

On the bright side, the truth that rebuts Trump’s “wrong” protestations is easily discovered. On the downside, viewers were none the wiser if they flicked off their televisions and didn’t bother with their own light research, or didn’t rely on the media and academic fact-checkers out there, or didn’t watch the post-debate news network chatter, which went into its own fact-checking.

Lester Holt, the NBC anchor who moderated the presidential debate, largely did not wield a verification stick like the Democrats had urged him to do and Trump’s surrogates insisted he not do, lest Holt’s roots as a Democrat show. (False: he’s a registered Republican, news outlets discovered after Trump’s baseless allegation.) The director of the Commission on Presidential Debates had largely sided with Trump, saying that it should be left up to the candidates to do their own fact-checking within the debate.

Trump took the commission up on that implicit offer, albeit with a lousy batting average. Clinton largely steered clear of doing the same; rather, she referred viewers to her campaign website’s own fact-checking tool. This is emblematic of their respective organizations: Clinton delegated the task to her massive campaign team; her political neophyte opponent took on the fact-checker task himself, and made a hash out of it.

The Republican candidate did catch Clinton in one tight spot, on her shifting record on the North American Free Trade Agreement and the Trans-Pacific Partnership, for her worst moment of twisting in the wind. But Clinton was able to largely sidestep her major Big Lie of this campaign: her tall tales and excuses for keeping a private email server when she was Secretary of State. Rather than repeat the untruths that fact-checkers had flagged repeatedly (i.e. that other State secretaries did the same), she kept it simple and concise: “I made a mistake… I’m not going to make any excuses.”

Holt, to Clinton’s fortune, didn’t ask her a direct question on emails, though he did ask her to follow up when Trump brought up the subject. The NBC anchor did press Trump on two of his campaign’s Big Lies: birtherism, and his false claim he opposed the Iraq war in advance. On the latter, Holt did pointedly dispute Trump’s claims on the timing of his opposition, not making the same mistake journalists excoriated Matt Lauer for earlier this month. The best Trump could offer was assertions he opposed the war beforehand in chats with pro-Trump broadcaster Sean Hannity, a perfectly proof-free claim.

In his grasping attempts to argue that Hillary Clinton started the birther smear, he alleged that in 2008 Clinton chief Patti Sollis Doyle had said as much in a recent interview. After the debate, CNN’s Anderson Cooper relished the chance to invoke Annie Hall: he happened to have Marshall McLuhan right here. Patti Sollis Doyle was at CNN’s Last Supper-length panel table Monday and Cooper gave her a chance to dispute Trump’s version. Then CNN ran the tape from CNN itself, from 10 days earlier, that easily put the lie to what Trump said.

The Pulitzer-winning group at PolitiFact vetted a series of statements from each candidate. Clinton had a few judged in the false category, but tended to get “true” and “mostly true” scores. Trump scored overwhelmingly “false.” While none of this got live airing on screen while the two candidates spoke, in this year of fact-checking it will doubtless be littered throughout media post-game reports. Trump has sown great distrust of the media among his die-hard supporters, but to win this election he’ll have to reach beyond them and into the real, media-consuming, Anderson-Cooper-watching segment of the American electorate.

Clinton certainly has her issues with veracity and prevarications as well. But this isn’t apples to apples, or even apples to oranges. This debate showed yet again it’s an apples-to-lacrosse balls comparison. One may taste bland, or mealy, or sour. Bite the other one and it might break your teeth.