'Yes, you have bribery here:' Expert Day at Trump's impeachment 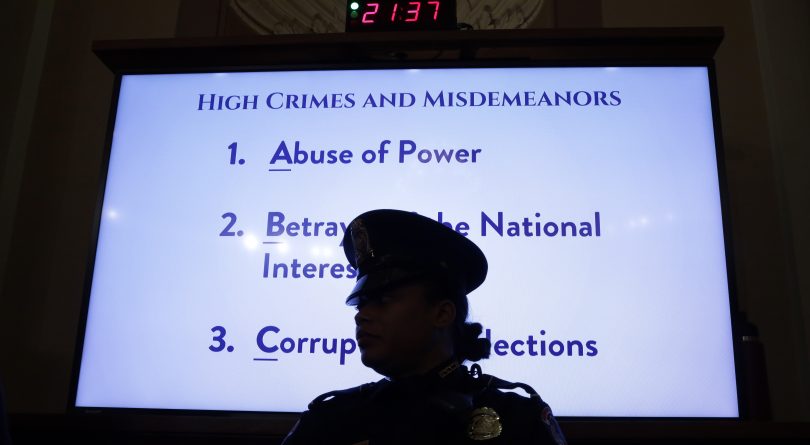 A list of high crimes and misdemeanors are listed on a monitor as constitutional scholars weigh in on Trump's impeachment. (Alex Wong/Getty Images)

Impeachment began in the 17th century with an Englishman’s insult of the King of Bohemia, which is why we have czechs and balances today.

It was a British solicitor named William Floyd who, in 1621, was sentenced by the House of Commons to pay a fine of 1,000 pounds and ride facing backward on a horse with no saddle while holding the horse’s tail, not to mention a branding with a hot iron, display in the pillory as a target for taunting and spoiled groceries, a productive flogging and imprisonment for life.

“I’d give a thousand pounds to be hanged instead and be a martyr,” said Floyd, or he wished he had.

Floyd’s high misdemeanor was a sarcastic rhapsody he expressed about the Prince Palatine and his wife, the Queen of Bohemia, whose team had been soundly outskated in the first period of the Thirty Years War. (Cross-checking the Czechs was a bad idea—Elizabeth of Bohemia was the daughter of England’s King James I, the Bible guy.) But it was the assertion by the Commons that it owns the right to impeach that is meaningful today, as the U.S. House of Representatives continues with its public whipping of Donald J. Trump.

The Floyd case, and the precedent it established, led to the insistence—only 166 years later—by America’s now sanctified Founding Fathers (then a gang of bewigged insurgents trying to set up their own caliphate) that the legislative branch of government possess the power to rein in the abuses of the executive, personified in the president himself. That power, of course, is impeachment in the House, trial in the Senate, and removal from office. So here we are.

If sarcastic commentary about two-faced foreign leaders met the standard of an impeachable offence today, Donald Trump would have been whipped strongly weekly (and again on Wednesday) before being sentenced to life at hard labour at Mar-A-Lago. But the Democrats signalled Wednesday that they will reach for three pieces of slightly higher-hanging fruit to throw at him.

Sometime before Christmas, it seemed likely, their Articles of Impeachment will include Trump’s “do me a favour” phone call with President Volodymyr Zelensky of Ukraine, abuse of power as outlined in the Mueller Report, and obstruction of Congress due to Trump’s refusal to allow his staff members to testify in the current inquiry. Then the Republican-controlled Senate will vote for acquittal, and everyone will go home for Passover.

On Wednesday, a trio of eloquent, highly-credentialed, Trump-abjuring academicians—a cat o’ three tails from campuses that, the Republicans charged, voted 97 per cent to three per cent for Hillary Clinton in 2016—came to the House to defame The Donald’s conduct as, in the words of Harvard professor Noah Feldman, “worse than the misconduct of any prior president.”

“If we cannot impeach a president who abuses his office for personal advantage,” Feldman said, “we no longer live in a democracy. We live in a monarchy or we live under a dictatorship.”

“Yes, you have bribery here,” said the scholar from Stanford University, law professor Pamela Karlan. “A president should resist foreign interference, not demand it.”

“If this is not impeachable,” said the third witness for the prosecution, Michael Gerhardt of the University of North Carolina, “nothing is impeachable.”

RELATED: The knockout of Donald Trump looks as distant as ever

“Today is a waste of time,” countered the Republican’s ranking member, Doug Collins of Georgia. “Americans will see why most people don’t go to law school. The American people is really gonna look at this and say ‘Huh?’”

What was advertised as a day of constitutional fireworks soon degenerated into the now-familiar partisan Jabberwocky.

“How will the rules be applied?” asked Collins.

“They will be applied according to the rules,” responded Jerry Nadler, Democrat of Manhattan and the Tweedledee-shaped solon in charge of this phase of his party’s unsaddled gallop toward impeaching the 45th president.

“Never before has a president engaged in all the acts that most concerned the founders,” Nadler said. “It does not matter that President Trump got caught and ultimately released the funds. We are all aware that the next election is looming, but we cannot wait for the next election to address this crisis. If we do not act now, President Trump will almost certainly try again.”

Much of the session was taken up with reading the tea leaves of the long-dead men who hurled British tea into Boston Harbour. Each of the witnesses quoted at length from the utterings of George Washington, James Madison, and, in particular, of Alexander Hamilton, since it was the bastard, orphan, son of a whore and Scotsman himself who warned of the danger to the country should “a man unprincipled in private life, desperate in his fortune, bold in his temper, possessed of considerable talents … despotic in his ordinary demeanour—known to have scoffed in private at the principles of liberty … mount the hobby horse of popularity.”

“Why don’t we just throw the Founding Fathers in the jury pool,” scoffed Representative Collins.

As they have been doing since the formal inquiry began in the Committee on Intelligence, Republicans focused not on the facts of the case, but on the process, its one-sidedness (thanks to Trump’s disinclination to take part), and its here-comes-Santa-Claus speed.

“Fast is not good for impeachment,” said George Washington University law professor Jonathan Turley, the only Republican-friendly invitee at the witness table. There is, he complained, “a paucity of evidence and an abundance of anger.

And Turley said he voted against Trump!

There then ensued a long and pedantic analysis of the 18th-century definition of the word “atrocious.” The hearings will resume next week.