Yet another job for Jared in Washington, D.C.

Daily Trump Tracker: The president sends his son-in-law to a meeting, and the Speaker tries to separate Trump and the Democrats 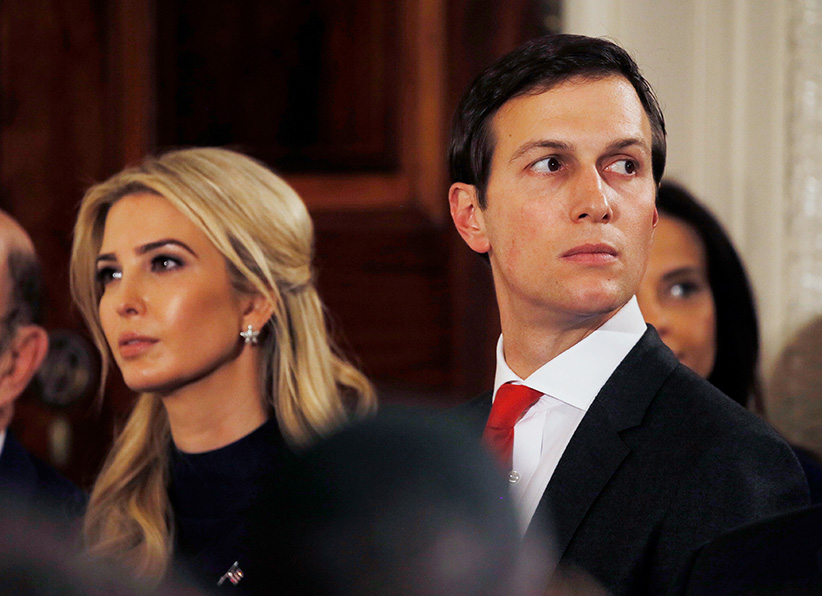 For the man who has everything
Donald Trump has already tasked son-in-law Jared Kushner with such simple tasks as remaking the government in the image of business and facilitating peace in the Middle East. He’s totally free to take one more intractable, complicated and immensely-consequential-for-people-who-aren’t-rich-and-white issue. So when the president needed to send someone to a meeting on criminal justice reform with two key members of the Senate judiciary committee, he naturally dispatched Kushner.

You can’t be friends with them—you’re my friend
The Republican healthcare plan may have fallen to intra-party squabbling, but Paul Ryan says that doesn’t mean the president can just cross the aisle and start talking to the other side. The Speaker doesn’t want Trump fraternizing with Democrats on Obamacare reform, he confessed to CBS This Morning. At least one Republican senator found Ryan’s kindergarten logic worthy of a subtweet.

You take my state, I’ll take yours
The Scots weren’t too happy when the Donald caught Brexit fever on a trip to (where else?) his South Ayrshire golf course last summer. His subsequent palling around with EU-phobe Nigel Farage and exhortations to other countries to follow Britain’s lead haven’t endeared him to Jean-Claude Juncker. The European Commission president joked he might return the union-rending favour by encouraging “Ohio and Austin, Texas” to secede.

Deus ex Georgina
The hottest new accessory for a nativist political campaign? The supposed opposition of globalist Big Bad George Soros. It’s become an article of faith on the right that protestors are being paid to show up to anti-Trump demonstrations—the Toronto Sun recently fell face-first for an online hoax to that effect—and the billionaire investor and philanthropist is often tabbed as the likely paymaster. Virginia Republican gubernatorial hopeful Corey Stewart today got in on the action, tweeting that he’d been told Soros was “targeting this race.” Stewart, who chaired Trump’s campaign in the state, is running a pretty distant second in the primary.

Airstrikes accelerate in Yemen and Somalia
Since Trump took office, drone flybys over al-Rawdah in central Yemen have ramped up from weekly to daily, according to a family whose men have been picked off one and two at a time since 2011. The president has also reportedly loosened the reins on commanders running airstrikes in Somalia.