'We were five votes away from a majority:' An interview with Newfoundland Premier Dwight Ball

The Liberal premier says his party has heard voters' plea for politicians to 'work together.' Also, he denies his leadership is in jeopardy 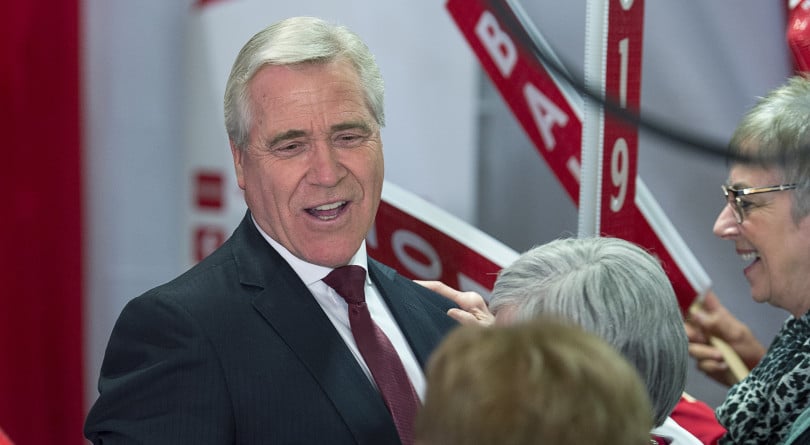 If only six more people in the riding of Labrador West had voted Liberal, Premier Dwight Ball would have had a second straight majority mandate in Newfoundland and Labrador. But in politics, ifs are cheap and plentiful.

Instead, the Liberals won 20 of the provinces 40 ridings, fending off the blue wave of provincial conservative parties taking power across the country, but creating what the leader of the opposition now calls “a situation of constitutional instability.”

Amid the jockeying of Liberals to form government, or the Progressive Conservatives to topple it, the province must still address its various economic crises, including a GDP that contracted last year, an ageing population that is straining health care resources, a shrinking labour force and record-high per capita debt.

Maclean’s writer Aaron Hutchins sat down with Ball in his office at the House of Assembly to talk about making friends with other parties in the House, how the government intends to face its fiscal problems, and whether he wished he had chatted with six more people in western Labrador. The interview was edited for length and clarity.

Q: The front page of The Telegram has the headline “Liberals win, and lose.” Do you feel like the Liberals won?

A: Yeah, I do. If you asked anybody “who won?” We had the popular vote. We won the most number of seats. And we’re government. It’s a minority government, which is not unusual in Canada—there are three in Atlantic Canada—so it’s not unique to Newfoundland and Labrador. It seems to be in vogue across the country, where provinces find themselves in this situation.

For me, it was not something entirely unexpected. I knew this was a possibility when the election was called.

RELATED: In Newfoundland, a razor-close election that nobody really won

Q: Your party won 20 seats in the House of Assembly, one short of a majority. Who do you think you can make friends with in the House to get a majority?

A: I’ll make friends with anyone who shares the same vision I do for our province. I think in going through this campaign, and even prior to the campaign when we had to deal with some of the harassment allegations that were made last year within the House of Assembly, I publicly spoke out and challenged members to work together and to do so in a respectful manner.

In 2016, we made it against the law to go into a campaign without having the most relevant and up-to-date financial information available. That’s what the budget [delivered in mid-April] did. That was part of the plan we started in 2016 to get our province back on track. There were lots of great discussion over the last month about the budget, and there were a lot of priorities that came from the people of the province.

So right now, we’ve heard a message. The people voted. And the message has a big exclamation mark behind it: “Work together!” It’s a challenge that I embrace. It fits with my management style. This gives us an opportunity to shine and show some leadership, where other provinces look at Newfoundland and Labrador and “say that’s how it should be done.”

Q: Do you think you can align yourself with the NDP, given the frustration many New Democrats had with your snap election call, which caught them unprepared?

A: Looking back at that, even in late March, it was very clear that people were getting ready. I had been challenged by the PC leader many times: “Bring it on. We’re ready.” The NDP had nominations that were called. I don’t think it was a big surprise to the people in the province that the election would be called, and I certainly didn’t hear much of that on the campaign trail. What I did hear was we have a lot of challenges, and the solutions are best found when everyone works together.

As an example, no other premier signed memoranda of understanding with Quebec. We had two, one on transportation and one on mining. We’ve reached out to Quebec in a collaborative fashion. Also, the Atlantic Growth Strategy is about partnerships within Atlantic Canada, so we’ve seen governments switch, and I’ve been able to work with all those provinces. So this is not a new area for me.

Q: Have you put any thought into who you’d like to be Speaker?

A: No. We’re going through a number of options and it’s premature to be able to make those decisions yet. The main thing is to speak with as many people as possible to see where the shared view and shared consensus is, and what ideas are priorities for other parties.

We still have some recounts to do. But regardless of the recounts, it won’t change our approach. If we pick up a seat, it’s really not going to change a whole lot. The message from the people is clear: work together.

Q: I would argue if you do gain a seat in the House after recounts, it would change a whole lot.

A: It gives you one more seat, but it’s still close. Everyone’s position is amplified. I recognize that. Like everything, the more seats you have supports your government. But I’ve learned over my last seven years in government that that can change too. But the basis for working together doesn’t change at all.

RELATED: Think your election choice is tough? Try being a Newfoundlander

Q: Progressive Conservative leader Ches Crosbie made it very clear in his post-election speech that you would not be premier of Newfoundland and Labrador one year from now. Do you foresee there being another election within a year?

A: One person never controls another’s individual destiny. For me, the person who controls my destiny is me. Mr. Crosbie might think that he’ll be the major influence, but there are 39 other members here, including myself, and there’s over 500,000 people who live in this province who need to have their say. Clearly, from the election last night, we won the [most] seats—20 seats—and we won the popular vote. That’s not what polling was telling us going into the election. The people have the final say.

Q: Do you feel this election result is a threat to your leadership?

What was unique is, when you look at elections in other provinces, they’ve turfed out provincial governments. We saw it in New Brunswick. We saw it in P.E.I. We saw a close win in Nova Scotia. We saw Rachel Notley defeated in Alberta and Kathleen Wynne going down in Ontario. Same goes for [former] premier Couillard in Quebec. What was unusual in Newfoundland and Labrador is that even though it is a minority government, we won the election.

A: A year ago, we had no exploration plan offshore. Next year, we’ll have nine drilling programs. We’ve also opened up some new mines within our province.

And we’ll be working with industry. Some of that investment is from outside our province but some comes from directly within our communities. It’s there, but untapped for decades. Even small companies can hire five to 10 people. By the end of the year, all of that adds up to 6,000 more people working in our province.

Q: Do you see any opportunity to rein spending?

A: We’ve stabilized spending. We purchase things as well, and one of the areas we’re seeing some cost increase is the area of consumer goods that we purchase as we deliver services. In terms of wages, we’ve been able to reach an agreement with all our major unions for four years [of wage freezes] and severance packages have been changed. We’ve been able to maintain the cost of delivering government services. You will see some increase in the purchases and procurement of things we need. But for the most part we’ve been able to maintain spending.

Q: After this election campaign, do you think the people of Newfoundland and Labrador understand your policy ideas to fix the economy?

A: I think it gave us an opportunity to talk about the program we put in place.

Q: But do you think it’s understood?

A: Not yet. If I stood up with nearly 6,000 people behind me, and I was cutting a ribbon and saying these 6,000 people will be working next year in our province, you would get that visual. People would say: “Wow. That’s significant.” But because those 6,000 people are scattered across the province, 10 here and 25 there, it’s not easy to articulate.

Q: Is there a way to address the debt problem facing the province?

The Atlantic Accord helped us quite a bit. If you go back to 2015, our debt-to-GDP was about 57 per cent. It’s dropped below 40 per cent now because of the Atlantic Accord. That’s still high, but we can reduce that number by growing our GDP. Newfoundland and Labrador will lead the country in GDP growth next year. Our immigration plan is two years ahead of our plan, and we’ll continue to be aggressive there. We’re outpacing most of our economic indicators from 2015.

Q: Do you wish you had spoken with six more people in Labrador West?

A: (laughs) Yeah. You always look back. I won an election once by 16 votes, so I always tell people when you start a campaign, you got to work right to the finish.

It was a by-election in 2007. I was in the headquarters of the person I thought I had lost to. When I was congratulating this individual, the media tapped me on the shoulder and said: “You’d better leave here. You just won.” When people say that politics is interesting here in Newfoundland and Labrador, that’s just one example. I’ve been on both sides. Right now, we were five votes away from a majority. But regardless, the solutions don’t change.

MORE ABOUT NEWFOUNDLAND AND LABRADOR: