Welcome Back, Elizabeth May 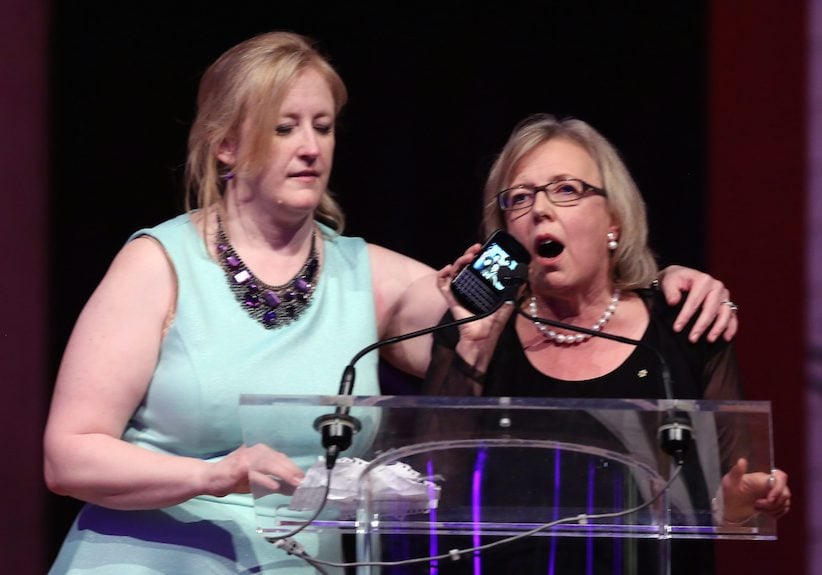 Let’s go back to quite a long time before Elizabeth May’s odd performance at the annual dinner of the Parliamentary Press Gallery, which news channels have been playing essentially on a continuous loop since Sunday afternoon.

Let’s go back to August 2006 when May became the Green Party leader. Nobody then predicted she would become the longest-serving Green leader in the party’s history. No, the prediction then, in the highly unstable aftermath of Stephen Harper’s narrow 2006 minority election victory, was that May would sweep the Greens into Parliament and make her party a major player.

Almost none of these predictions has come true.

“Beware the Greens,” Barbara Yaffe wrote in the Vancouver Sun. “They’re at the gates and there’s a better than excellent chance that, after the next federal election, their party will have its first seat in the House of Commons.”

The choice of “media magnet” May gave the Greens “the potential for a real breakthrough,” Sheila Copps wrote in the Toronto Sun. “May’s impeccable media connections will certainly influence the broadcast consortium” that, in those days, claimed a monopoly on debate organization, ensuring May a spot in the next leaders’ debates, Copps said.

And indeed, May did participate in the 2008 leaders’ debates. But she didn’t win a seat in that election, as she had already failed to do in a by-election in London. It wouldn’t be until 2011 that she would win a seat in Parliament (despite being shut out of that year’s debates). Along the way, her promise to build the Greens into a national movement has met with … well, mixed results. She “boldly predicted breakthroughs in Quebec in the next election,” the Globe and Mail reported two days after she won the Green leadership. No such luck. “If we’re able to have both candidates and advisers, people speaking to Green Party policy favourably, who come from unexpected sectors—corporate Canada, trade labour unions, First Nations leadership—I think that will communicate to Canadians that we’re a party that speaks to a broad range of issues,” May said on the same weekend. That hasn’t really come to pass.

The 2011 election was the perfect expression of the May era. She won her seat, and has since been viewed with affection by colleagues from other parties. (They elected her “Best Orator” in the Maclean’s Parliamentarian of the Year honours in 2014. The punchlines practically write themselves.)

But the Greens’ nationwide share of the popular vote stood at 3.91 per cent, which was not only lower than its high-water mark (6.78 per cent in the 2008 election) but lower than in 2006 (4.48 per cent) and in 2004 (4.29 per cent). Recent polls suggest the Greens are riding higher, but that had better pan out in this October’s general election, or May will stand as a less successful Green leader, on average, than — than — does anyone remember the name of the leader she replaced? That’s right. Jim Harris.

But how can I say she’s less successful? She has a seat in Parliament. Jim Harris didn’t. She often gets respectful coverage (this was, I believe, the only column I’ve written in which May was the main subject, and she comes off looking pretty good).

But the Green Party, as a party, has wasted away until now it is basically a wizened life-support apparatus for May’s continued tenure as a member of Parliament. This guy used to keep track of Green Party Electoral District Associations that had lost their status as registered organizations with Elections Canada; by the time he gave up two years ago, it wasn’t looking good for the Greens. The party’s rules called for a leadership review vote in 2010; that got hoisted by a controversial party vote until after the 2011 election. When the vote happened, in 2011 May received more than 94 per cent support for her continued leadership; “turnout” for the online survey of party members was 23 per cent.

Meanwhile, she keeps talking. In 2006 she referred to some abortions as “frivolous.”  She said Stephen Harper’s position on climate change was worse than Neville Chamberlain’s on Hitler. She’s really not sure about Wi-Fi.

Elizabeth May has stripped the Green Party for parts, turning it into a vehicle for the continued advancement of her career as a parliamentarian. She needs that career to be worth promoting. What she says when she’s at creepy weekend social events may be the least of her party’s problems.