The big 'if' in the trial of Mike Duffy

A preview of the trial from Paul Wells, plus a spoiler alert: It's not going to make good television 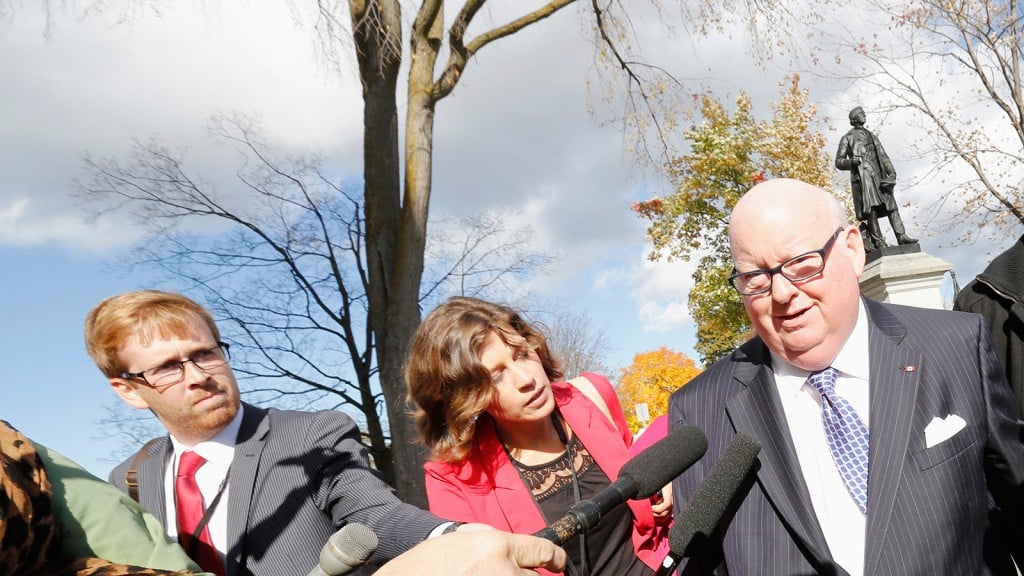 On Thursday, the Ottawa courthouse more than doubled the number of seats available for reporters in the “overflow room” next to the courtroom where Mike Duffy will go on trial on 31 counts of assorted fun malfeasance. That’s a relief. Between seats in the actual courtroom and seats in the overflow room with a live video feed, that’s 70 places for journalists. You’ll be getting Duffy coverage on the TV, Duffy in the papers, Duffy on your phone. If you download Crossy Road from the Google Play Store, there’ll be a bonus level that features Mike Duffy complaining the expense forms were complicated.

Multiply the vastness of the resources that are going to be thrown at this trial by the (modest) depth of the press gallery’s working memory, and you understand why some are tempted to call this the political trial of the century. I mean, it may yet turn out to be that. Mike Duffy took a personal cheque from the Prime Minister’s chief of staff to paper over the results of what, in the RCMP’s view, was an extended bout of book-cooking in the office and assorted faux and kosher abodes of the senator from Humming Airwaves, P.E.I. It’s a lurid business, and Duffy’s defence plan seems to be to make it more lurid if at all possible.

It is all the easier to imagine that this trial could get weird because there are not a lot of Canadians more famous than Duffy, at least among the sort of Canadians who tend to vote in federal elections. This was true long before there were charges and an overflow room and a vaguely otherworldly website that collated all of his videotaped greetings to prospective Conservative Party of Canada donors. Many years ago, when Duffy was a CTV on-air personality and I was at the National Post, we wound up waiting for luggage at the same carousel in some airport, Vancouver’s or Winnipeg’s or some such. I enjoyed passing the time watching regular folks step up for a chance to shake ol’ Duff’s hand. He was very good about trying to share the limelight. “Have you met Paul Wells? He’s with the National Post.” Canada was having none of it. The carousel crowd had eyes only for Duffy.

So if Duffy manages to sell his central thesis—that he is the victim of a PMO campaign to wreck him, even though what he did was neither unusual nor against the rules he’d been quoted by Harper’s staff on the way into the Senate—then he could inflict a large amount of political damage on the government. But that’s a big “if.”

Related reading: Mike Duffy’s seven-step guide to handling a crisis like a pro

Beyond the facts of the case, which will come out at trial and about which I’m reluctant to speculate, there’s the framing of the thing. Here it’s important to remember that, unlike the Gomery commission into the Liberal Adscam skullduggery in 2004-05, or the Oliphant commission inquiry into Brian Mulroney’s dealings with Karlheinz Schreiber in 2009—the first two “trials of the century” of this young century—Duffy’s trial will not receive wall-to-wall television coverage. There’s no video feed from the courtroom, no cameras allowed even in the Ottawa Courthouse hallways. There’s one entrance. It will be surrounded with cameras, so you’ll see a lot of footage of Duffy entering the courthouse, Duffy leaving the courthouse, and then long pauses during which reporters in the room tweet snippets of testimony, and reporters standing outside the courthouse break into regularly scheduled coverage to summarize the past couple of hours of offscreen drama.

This is lousy television. It will substantially cut into the drama value of the affair. The facts of the case will not be changed, and so Maclean’s will have comprehensive coverage along with every other news organization you can think of. But you won’t be able to curl up in front of the TV and binge-watch Duffy Trial as though it were a season of House of Cards. Mike Duffy was a reliable provider of good TV for many years, and it’s odd to think that when he finally gets his chance to make his stand, it’ll be in a place where he can’t provide good TV.

Related reading: On the trail of the Duffinator