Welcome to the new America

Trump's greatest achievement has been to dismantle reality as we know it, replacing it with a universe where sense is dismissed as nonsense 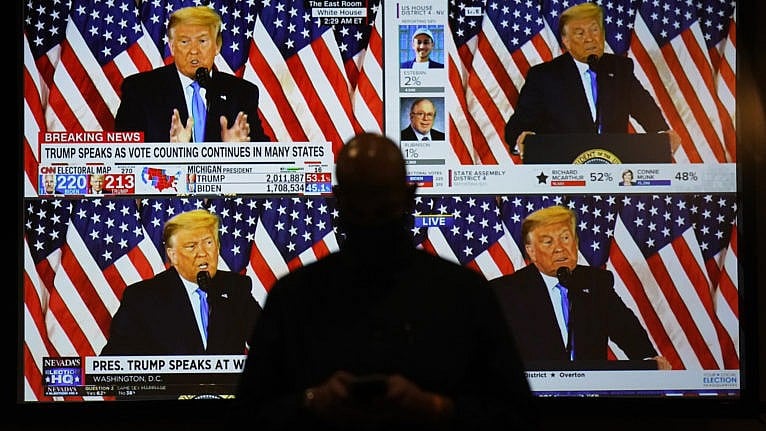 A live broadcast of Donald Trump speaking from the White House is shown on screens at an election-night party in Las Vegas. (John Locher/AP)

The results of yesterday’s presidential elections may still be in doubt, but if there’s a lesson, it is this: all those rational ideas of voters weighing the facts, assessing their candidates and choosing a leader based on an honest appraisal of what is best for their country are irrelevant in the post-factual world we now occupy.

Based on any reasonable assessment of the current state of play in America, in terms of both domestic and foreign policy, there is no way Donald Trump should have done as well as he has. The polls told us otherwise, the pundits presaged a Blue Wave; even common sense, that visceral inkling in millions of bellies around the world, seemed to say, ‘No way; he doesn’t stand a chance.’ But in this topsy-turvy moment, what is common is uncommon. Sense is increasingly dismissed as nonsense.

This is Trump’s greatest triumph. He has dismantled reality, replaced it with his own reality-TV facsimile and convinced tens of millions of Americans that what he’s peddling is The Truth.

RELATED: U.S. Election 2020: The three states everyone is watching now

He didn’t do it on his own, of course. Reality was already under assault and fraying, pummelled by social media and the rise of online “news” sources where information is not so much vetted as it is packaged. It used to be that news was curated by gatekeepers in the publishing industry, which of course raised its own questions of silenced voices and privileged perspectives (remember those days when independent writers fretted over the potential shuttering of Coach House Books?).

Now, no voice can be silenced, not even that neighbour with the tinfoil hat pounding out conspiracy theories from his basement. Even he can find an audience in the millions, and—as the facts have shown—reach the president of the most powerful nation on earth.

I’ve met that audience—dozens of Trump supporters—during my recent cross-country road trip through Trumpland. Like all humans, they have been varied in personality and outlook, but one thing has been surprisingly, disconcertingly, consistent: the information universe they occupy has little or nothing to do with the universe of verifiable fact.

In the worst case, when you offer up facts to these people, they dismiss them as “fake news”. In the best case, you might make them think a little, for a little while, before they return to their rage-filled fugue. Take this exchange I had with a former U.S. army engineer in Ohio, who didn’t want to be named (also a weirdly Trumpian characteristic—wanting to remain anonymous):

Me: Will you vote for him again this year?

Me: What has he done during his presidency that makes you want to vote for him again?

Guy: He lowered my taxes. He promised to get us out of foreign wars, and he did it. And look what he did in North Korea. No president has ever managed that.

Me: What has he done in North Korea?

Me: But you do understand that they don’t need to test their warheads—they’ve already tested them and they work. What they need are delivery systems—you know, long range missiles that can reach places like the U.S. They haven’t stopped testing those. In fact, they’ve ramped up that testing.

Me: But that’s temporary. Most economists agree that the benefits of Trump’s tax reform to the middle class won’t last.

READ MORE: American evangelicals still see Trump as their anointed one. Why?

I’ve lightly edited the conversation for clarity, but that’s essentially how it went. I don’t think I convinced him not to vote for Trump. That wasn’t my intention. My segue into editorializing was the product of dozens of conversations in which I’d patiently listened to Trump supporters say things which were demonstrably wrong. I cracked.

Anyone who values facts—and based on the results of the popular vote in this election, that is a slight majority of those who voted—is fracturing into a thousand frustrated shards. The fact that it’s only a slight majority, that tens of millions of Americans are dancing to Trump’s discordant tune, is enough to make any reasonable person’s head explode.

But here’s the most disturbing irony: when asked in exit polls whether people voted on the issues or on the candidate’s personality, Trump voters overwhelmingly said the issues. The subtext, of course, is that they voted on their understanding of the issues.

Trump and the (dis)information universe he governs is, in the parlance of that universe, trending. What’s chilling is that this may very well have been the goal of Republicans all along. According to Ron Suskind in a 2004, article for the the New York Times Magazine, a senior Bush-administration official, widely believed to be Karl Rove, told him as much:

“The aide said that guys like me [Suskind] were ‘in what we call the reality-based community,’ which he defined as people who ‘believe that solutions emerge from your judicious study of discernible reality.’ I nodded and murmured something about enlightenment principles and empiricism. He cut me off. ‘That’s not the way the world really works anymore,’ he continued. ‘We’re an empire now, and when we act, we create our own reality. And while you’re studying that reality—judiciously, as you will—we’ll act again, creating other new realities, which you can study too, and that’s how things will sort out. We’re history’s actors … and you, all of you, will be left to just study what we do.’

In Trump, these Republicans, who now dominate the party, found their perfect front man: a reality TV star. And what is reality TV other than a Baudrillardian simulacrum, a facsimile, created and re-created, episode after episode, season after season.

Regardless of who wins the election, that is not going to change. Welcome to the New America.