'We're leading the way:' Government to run on green power by 2025

The announcement comes just before the UN's annual climate report, which is expected to find the need for an additional 25 per cent in reductions. 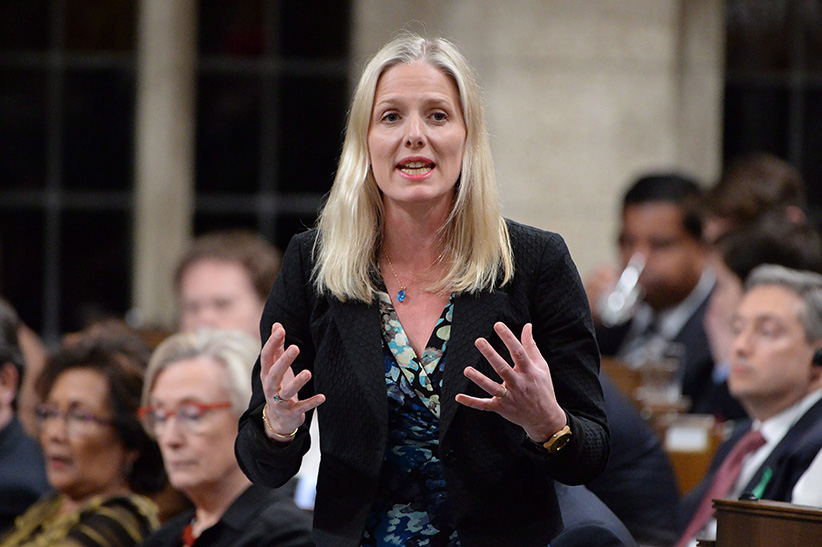 CALGARY — The federal Liberals are promising to run all government operations on renewable energy within a decade, Environment Minister Catherine McKenna said Wednesday.

Speaking in Calgary to the Canadian Wind Energy Association, McKenna said the switch is to be complete by 2025.

“Today, to show we’re leading the way, we are announcing our firm commitment to purchasing 100 per cent renewable power for government operations by 2025,” she said.

“The government needs to be a key player to support the acceleration of clean growth — not only through policy, but by investing and showing leadership.”

McKenna said the government plans to buy renewable electricity for federal facilities such as military bases.

Few details were immediately available on how the program will work, but she confirmed it will include all government operations.

“We’re talking about government operations, buildings and fleets by 2025. This was something that was actually an agreement with the U.S. and Mexico … It shows our government is going to take a leadership role.”

McKenna wouldn’t say how much it will cost to move to renewable energy provided by wind, solar or hydro.

“The good news is, when you look at renewables, they’re actually becoming very cost competitive, so I think by 2025 you will see in many cases it’s parity and there’s different sources to choose from,” she said.

The announcement was welcomed by Jean-Francois Nolet, vice-president of the Canadian Wind Energy Association.

“It sends a clear message to investors and this is what we need … so that investors can go ahead and invest in many of the different provinces and the regions, create jobs and benefits to the local communities,” he said.

“Ultimately, it’s all about reducing emissions, and wind is a big part of it.”

As McKenna was speaking in Calgary, Treasury Board President Scott Brison was announcing in the House of Commons in Ottawa that the federal government plans to reduce its greenhouse gas emissions by 40 per cent by 2030.

“We are creating a Centre for Greening of Government at Treasury Board that will track emissions, co-ordinate efforts across government and drive results,” Brison said in the daily question period.

Currently, National Defence and Public Services and Procurement Canada account for more than three-quarters of all government greenhouse gas emissions.

Greening Canada’s federal government operations will have only a minuscule impact on national emissions, but is seen by the Liberals as symbolically important and as a potential boost to Canada’s clean-tech sector.

The scale of the challenge ahead is expected to be put into sharp relief Thursday when the United Nations Environmental Programme releases its annual emissions gap report.

It is expected to show that, even if all greenhouse gas reduction pledges made in Paris last December are achieved, the world will still need to cut a further 25 per cent to limit global warming to two degrees above pre-industrial levels.

“By committing to use more clean power in government buildings and improving energy efficiency, the federal government is walking the talk and showing Canadians it’s serious about reducing carbon pollution and investing in clean growth,” said senior policy adviser Sarah Petrevan in a statement.

“Today’s announcement is a small but important step as we make the shift to an economy that runs on clean, renewable energy.”