The polls may not move much as a result of Thursday’s French debate. But that’s not the only reason we hold these things 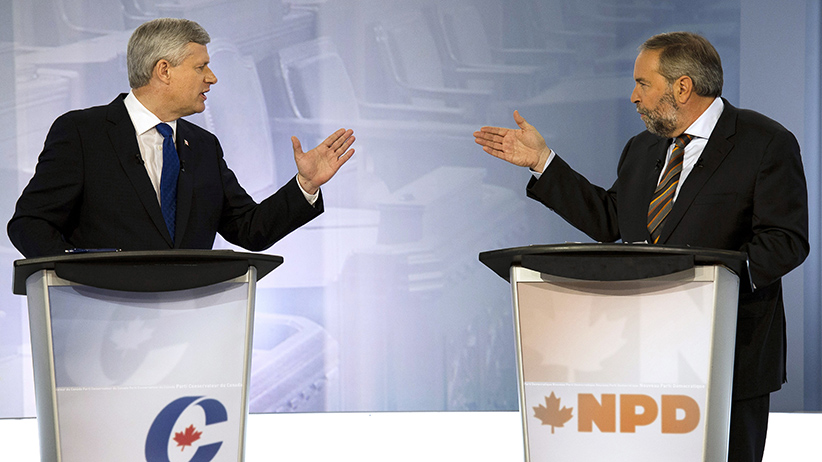 Well, come on. It’s no fair letting a bunch of broadcasters organize a television debate.

And indeed, as one might have expected, the impromptu quasi-consortium that replaced the traditional broadcast cabal for the purposes of Thursday’s French-language leaders debate put on perhaps the smoothest in the series of debates that has characterized this long campaign.

Radio-Canada, Télé-Québec and La Presse were the organizers. Radio-Canada seems to have done most of the organizational heavy lifting. The tone was brisk, intellectually serious—topics ranged from subsidies for green vehicles to physician-assisted death to the influence of Scotland’s secession referendum on the terms of a future Quebec vote—and orderly. I’m about to get to the inevitable punditological hand-waving about who won and lost, but voters also watch these events for information, and there was a lot of information on offer here.

Tale of the tape: A full transcript of the Maclean’s debate

For the third debate in a row, I was struck by what didn’t happen: there was no generalized gang-up by most of the leaders against one of them. I could imagine the “one” being Stephen Harper, but I most expected it to be Tom Mulcair. The NDP leader entered this campaign as the front-runner and, even though he faded a bit, he offers the largest supply of votes the others might hope to raid. Especially in Quebec. Yet there was no extended portion of Thursday’s debate that featured the other leaders lining up to take shots at Mulcair. They all have too much business with one another. Justin Trudeau went after Harper. Harper went after Trudeau and Mulcair. Gilles Duceppe, returning to a national audience for the first time since the Bloc Québécois’s 2011 debacle, seemed listless and barely interested. So the geometries of confrontation were variable and no front-runner dynamic emerged.

If only somebody could have gotten to Mulcair at about the halfway point and said, “Boss, since they’re not all after you, you can stop pushing back.” He certainly seemed to think he was the target. It made his mood brittle at times. Trudeau accused him of having advocated bulk-water exports once upon a time. Mulcair’s eyes flashed. “You don’t like debates because your staff has to write all your lines for you,” he said. “I write my own.” To me it sounded like Jim Prentice’s snotty “Math is hard” dig against Rachel Notley in the spring’s Alberta election debate, though it’s hard to believe it will have as much resonance.

Even without the others ganging up against him, Mulcair faced a serious challenge: He had to look like a Bloc-style defender of assorted Quebec positions, and also as a plausible leader of a national government. He managed well. An NDP government would introduce a suite of new national health-related programs, he said, “but when it comes to Quebec: a right to opt out; full compensation; no conditions.”

This talk echoes the Meech Lake nightmare of nearly 30 years ago, with Mulcair intoning the incantations most cherished by Quebec nationalists. But on a far touchier subject, the wearing of Muslim religious headgear at citizenship ceremonies, Mulcair defended a position—government accommodation of difference—that isn’t particularly popular in his home province. He may gain, for being statesmanlike, what he loses by passing up a chance at populist appeal. If he’s lucky.

Harper’s statement on the niqab issue was a sort of passionate non sequitur. “I will never tell my daughter that a woman must cover her face in public,” he said. “That’s not my Canada.” Sure, great, but the question, as Trudeau noted, isn’t whether a father should tell his daughter what to wear; it’s whether a prime minister can tell a citizen what she may not wear. On this issue, as on so many, I’m not sure who managed to change any voter’s mind.

Even as I write this, I see some of my colleagues at other news organizations saying they thought Justin Trudeau had a strong night. It’s not what I saw. He seemed to fade in the second half, intervening less often and with less verve than, in particular, in the Maclean’s debate. It’s never easy to guess how much such things are due to human frailty and how much to calculation: Maybe Trudeau wanted to let Mulcair talk himself into trouble, or maybe this long campaign is starting to weigh on the field’s youngest leader. We’ll have other chances to see him, Harper and Mulcair again soon, with the Munk Debate on foreign policy on Monday, and the TVA French-language debate later next week.

In the meantime, I’ll be surprised if this debate moves the polls substantially. But that’s not the only point of a debate. If we have these things so voters’ choices can be better informed, then this was one of the most useful and encouraging evenings of the campaign so far.