What Alberta voters should know about Jason Kenney and the UCP

Jen Gerson: The frontrunner's platform features a few solid ideas, but they're overshadowed by cynical, ill-advised and improbable ones 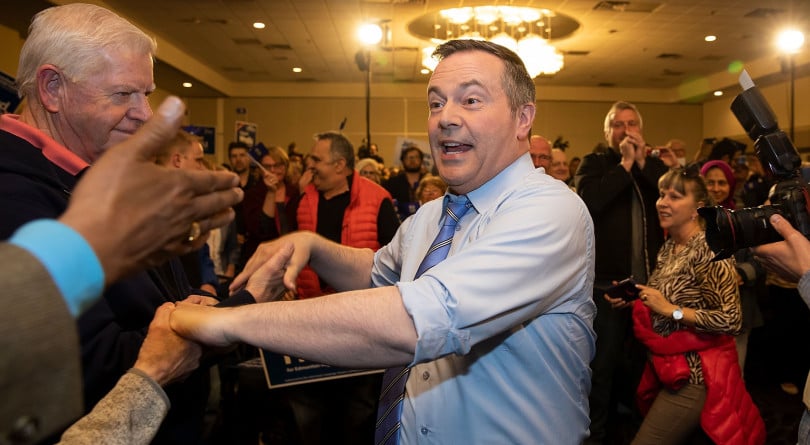 Jason Kenney at a campaign rally in Edmonton. (Codie McLachlan/CP)

In the end, it will come down to the economy. It always comes down to the economy, and Rachel Notley’s NDP—mired in four years of high unemployment, recession, and then slow growth—was always going to struggle to defeat a rejuvenated United Conservative Party led by Jason Kenney.

Predictions in Alberta are futile, and polling here is notoriously unreliable, but it seems difficult to imagine a scenario in which the UCP doesn’t win on Tuesday.

Leaders wear their economic records. And voters in Alberta—who have long correlated boom-time prosperity with conservative governments—have every reason to be hopeful about the return to reliable old voting habits.

Playing to its strengths, the UCP unveiled an extensive, even wonkish, policy platform during this election that may alleviate some of Alberta’s woes and gripes, though not the global price of oil that much of its suffering is predicated upon.

The UCP, for example, wants to create a resource corridor that will help to expedite future infrastructure projects. This is a generational project that, with true financial ownership from First Nations groups, could help create meaningful buy-in that would enrich affected communities for decades to come.

RELATED: Rachel Notley on why the NDP deserves a second chance

I see a strategy for natural gas exports, and a push to help recent immigrants find an easier process to gain recognition for foreign credentials. There is, in this platform, a balanced approach to supervised drug-consumption sites, with more focus on detox and treatment beds.

The UCP’s plan to cut the corporate income tax to eight per cent is, in my opinion, a gamble on a larger deficit that may or may not lead to the kind of economic growth the party is implicitly promising to an angry and economically afflicted electorate.

As for its budget plans, there is nothing substantively different from what the NDP is proposing; the UCP is offering a few cuts, the NDP is promising a bit more spending, but both essentially rely on resource royalties to bring the budget back into balance.

In other words, the UCP platform is chock-a-block full of defensible, and interesting policy suggestions; and those are overwhelmingly not the ones we are talking about in this election.

The top-line promises coming out of the UCP government-in-waiting are the types of things Jason Kenney screams through megaphones to crowds of angry protestors. They’re of an entirely different order, and they’re selling Albertans and entirely different bill of goods.

Alberta’s beef with equalization is both longstanding and, for the most part, just. However, the equalization formula, which takes revenues generated through taxes and then re-distributes them to poorer provinces to ensure a roughly equal level of government services across country —is a constitutionally entrenched feature of Confederation.

The UCP’s promise to hold a referendum on equalization in Alberta might be one of the most misleading and idiotic vats of snake oil ever peddled to an angry and vulnerable population on the campaign trail.

Citing the Quebec secession reference, the party claims that by holding a successful referendum, the federal government will be forced into negotiations on equalization. To say that this argument is novel is putting it mildly.

Even if a referendum did force the federal government to the table, there is nothing stopping a Prime Minister from simply saying: “Nah, we’re not changing anything. But thanks for making the trip.”

Changes to the funding formula itself are already reviewed regularly in Parliament—a referendum doesn’t necessarily give Alberta any more leverage to lobby for a change than it currently has. In fact, politicians like Scott Moe are already pitching for serious reform. Further, there is no likely equation that would see Alberta become a recipient of equalization, as  incomes are still too high compared to the rest of the country.

And if a mere change to the funding formula isn’t good enough for you, then the news gets worse.

Alberta doesn’t get to vote out the parts of the constitution that don’t suit it. It would likely be impossible to extricate equalization wholesale without a constitutional amendment, which would require the assent of seven Canadian provinces containing 50 per cent of the population.

I’ve heard UCP supporters defend this promise by claiming that a referendum will, at least, garner a lot of attention and put equalization on the national agenda, as if it has not been languishing there for more than a generation. But Kenney isn’t promising a giant media stunt: he is promising a vote that will have a material impact on equalization. He can’t deliver that.

The UCP has promised to join Saskatchewan, Ontario and New Brunswick in a court challenge of the federal government’s right to impose that backstop. The outcome of the challenge is a big unknown. Maybe it will succeed. Maybe not. Either way, Alberta will rack up a few billable hours and get a front-row seat to a great bit of theatre.

Meanwhile, Kenney’s promise to rescind the 100 megatonne cap on oil sands emissions may put the Trans Mountain expansion at risk. Remember, the line was stalled last year after a federal court ruled that Ottawa had failed to conduct adequate consultations with First Nations on the line.

Now owners, the federal government re-visited those consultations and expect to have them completed by May. But there’s nothing stopping the Liberals from extending those consultations indefinitely. There’s nothing stopping them from simply rejecting the expansion for the sheer joy of smushing a political pie in Kenney’s face. Why would the federal Liberals be in any rush to grant a belligerent Jason Kenney a win on this file after he is elected?

That’s the problem with picking a fight; the other guy gets to fight back.

Turning Off the Taps

At the height of British Columbia’s intransigence last year, at the peak of the 21-part Wagnerian cycle, The Saga of Trans Mountain, Rachel Notley introduced Bill 12. It was a threat. If B.C. didn’t cut the obstructive court filings, Alberta would pull permits for oil and gas producers shipping product along the line. Bill 12 could have turned off the taps to B.C., forcing its residents to feel the pain at the pump for their leader’s idiocy.

The bill passed, but was never proclaimed. Why? Because B.C. Premier John Horgan backed down and referred the mess to the courts in a case that Alberta is likely to win. The province successfully scared Kinder Morgan off the project. Then the federal government bought Trans Mountain, assuring its (eventual) approval. In short, B.C. is no longer delaying Trans Mountain.

So, the UCP’s promise to proclaim the law on the first day of its government for the sheer vindictive thrill of it makes no strategic sense.

B.C. (and, likely, the oil companies affected) will challenge Bill 12 on constitutional grounds once it is proclaimed. They may ask for, and receive, an injunction that puts an end to the stunt fairly rapidly.

If Alberta did begin to curtail supply, thus increasing the price of gas, the residents of B.C. may see the error of its NDP-voting ways—or the scheme could backfire spectacularly, cementing dislike for Alberta generally, and conservatives more specifically.

Turning off the taps invokes the iconic antagonism of Peter Lougheed, who curtailed natural gas exports to the rest of the country at the height of the National Energy Program. But Lougheed had a strategic aim when he curtailed supply; it wasn’t some act of pointless male bravado.

And curtailing supply is a stunt Alberta will likely only get to try once. Proclaiming Bill 12 simply to mark a UCP victory is like shooting a hunting rifle in the air to celebrate a wedding—if you only had one bullet that you would likely need later to hunt for food.

Picking fights with the majors

For all his attempts to cast himself as the white knight of Alberta’s oil sector, Jason Kenney also has a history of picking fights with oil and gas companies who endorse a carbon tax.

“To be blunt, I’m not going to take lessons from, I’m not going to let a billionaire president of major oil companies dictate to people how they live their lives,” he said in a recent episode of Power & Politics, for example.

I understand why the head of the Canadian Taxpayers Federation would take a swipe at the C-suite fat cats who head the major oil and gas companies on behalf of real, everyday, carbon-tax paying Albertans. (Kenney, it’s worth remembering, once led the CTF.)

What I don’t get is why someone running to be premier of one of the continent’s most important oil and gas jurisdictions would opt for open hostility against companies like Shell, Cenovus, Suncor, and Canadian Natural Resources.

It’s well known that there is a split in the industry between large and small producers—the former supporting carbon taxes, and the latter opposing them.

But for a would-be premier who harps on about the Alberta jobs crisis and fleeting international investment, I question the wisdom of picking fights with the majors, rather than merely disagreeing with them.

If the UCP is serious about trying to encourage more investment into a moribund Alberta economy, it should ask itself what, exactly, is to be gained by a premier who is hostile to the long-term environmental and corporate social responsibility goals of some of the wealthiest oil and gas companies on the planet. 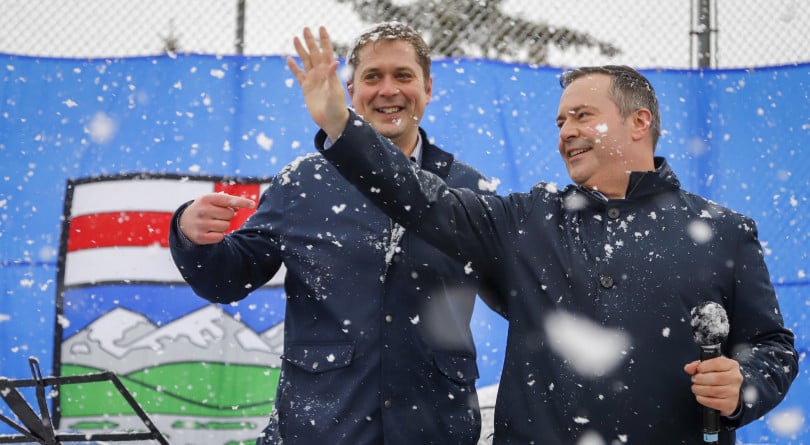 What if Andrew Scheer wins?

If Conservative leader Andrew Scheer wins in the October federal election, it seems likely that many of these theatrics will come to nothing. Scheer has promised to rescind the carbon tax. And so goes Alberta’s climate change plan, and the lawsuit along with it.

Scheer will almost certainly sign off on Trans Mountain; and it even seems plausible to imagine that a Conservative government in Ottawa would grant some flashy changes to an equalization formula that Kenney can turn into a win, thus obviating the need for a referendum.

But, then, what was the point of any of these hustings threats? A Scheer win makes them unnecessary.

And if Scheer doesn’t win, and Justin Trudeau goes on to his second term, where do these postures leave Alberta?

The real end game, I suspect, isn’t to win. It’s to fight. If Trudeau cancels or delays the Trans Mountain expansion because of the emissions cap, well, great. One more reason for Alberta to feel aggrieved.

If Ottawa won’t play ball after a referendum, all the better. If the courts rule against the constitutionality of Bill 12, or deem the carbon tax and Bill C-69 perfectly just, well, we all know the courts are in the bag for the Liberals.

Losing is the goal. Being angry is the goal. Creating a perpetual culture of grievance and victimhood, one in which we can always blame Ottawa for our suffering, is the goal. All the better to ensure we always elect Conservative premiers—truly, the only premiers who are fighting for Alberta’s interests—to charge Don Quixote style at the distant eastern windmill.