What Chrystia Freeland’s real role will be

John Geddes: Trudeau's new deputy PM is about getting a job done behind closed doors, not winning over voters—least of all in Alberta 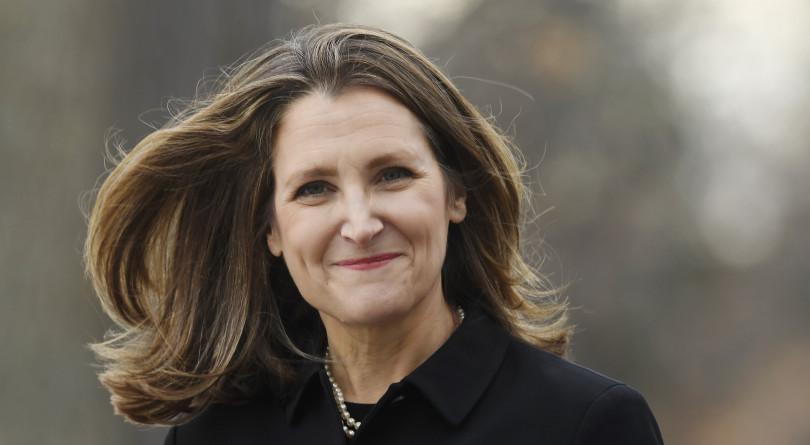 Freeland arrives for the cabinet swearing-in ceremony in Ottawa on Nov. 20, 2019 (THE CANADIAN PRESS/Adrian Wyld)

You can take the gal out of Alberta, they say, presumably, but you can’t take the Alberta out of the gal. If you were going to try, though, you might want to educate her at Harvard and Oxford, and then have her rise through a string of elite journalism jobs in London and New York, during which time she emerges as a quintessential member of the Davos jet set, and finally have her jump into politics as the MP for, of all ridings, Toronto Centre.

Such is the résumé of Chrystia Freeland, whose star turns as first Justin Trudeau’s trade and then his foreign minister during his 2015-2019 government established her as his most bankable cabinet asset. By making her his intergovernmental affairs minister today, and especially by naming her deputy prime minister, Trudeau is signalling his hope that Freeland can do something about Western alienation. The fact that she grew up in Alberta—between her mother’s Ukrainian socialist co-op in Edmonton and her father’s Peace River farm—is supposed to matter.

That’s a dubious notion. Martha Hall Findlay, president and CEO of the non-partisan Canada West Foundation think tank, who was a Liberal MP from 2008 to 2011, says she hopes the Liberals don’t emphasize her family roots too much. Hall Findlay points out that even with genuinely formidable western figures around the cabinet table—especially Ralph Goodale, who lost his Regina seat in this fall’s election—Trudeau’s Liberals failed to build credibility in Alberta and Saskatchewan. “It doesn’t matter where a cabinet minister is from,” she says.

What does matter then? Hall Findlay argues that Trudeau must somehow revisit and reform his new Impact Assessment Act—vilified in Alberta as the No More Pipelines Act. Strictly speaking, that law for reviewing big resource projects isn’t in Freeland’s new purview. Even if it were, tinkering with policy isn’t likely to bring many Albertans around to Liberal rule. Robert Wardhaugh, a history professor at Western University, who has written on the Liberal party’s unbroken troubles on the Prairies going back to the 1930s, says appointing cabinet ministers who are supposed to be attuned to regional grievances doesn’t matter to voters. “I’d be hard-pressed to think of a time in Canadian history when cabinet representation ever became a political issue for the electorate,” he says.

READ MORE: Chrystia Freeland and the art of the deal

At root, according to Wardhaugh, the Liberal party’s problem is that appealing to Quebec and the Prairie West at the same time is notoriously difficult. Tories have struggled with it, too; Brian Mulroney was unable to balance Quebec and the West in the 1980s. Trudeau is from Montréal, but his government’s political centre of gravity is clearly Ontario. Still, Wardhaugh says Trudeau’s determination to help SNC-Lavalin—the Quebec-based company at the centre of the affair that hit him so hard last winter—confirmed deep Prairie-populist suspicions. “It was really about Quebec,” he says. “At least, in the West, they certainly saw it that way.”

So, Hall Findlay says Freeland’s Alberta upbringing counts for zip. Wardhaugh says Liberals can’t cut it on the Prairies as long as they attend to Quebec. If they’re both right, Freeland is bound to fail—if success if defined as reviving Liberal political fortunes in the region. But maybe that’s not her real assignment.

Consider how she has thrived so far. Spearheading the Trudeau government’s effort to save NAFTA, when Donald Trump’s protectionist agenda looked like a mortal threat to Canada’s most vital economic relationship, was emphatically not about shaping public perceptions. It was about leading a complex, sustained, largely behind-closed-doors effort. Perhaps that is also how Trudeau’s inner circle conceives of the most pressing challenge confronting them now. Seen this way, progress won’t be measured in terms of, say, polls showing Liberals less loathed in the flatlands. Instead, Freeland might be expected to find ways to make progress in Ottawa’s relationship with the provinces in a way that more broadly makes Trudeau look less divisive and more constructive.

If that’s her job, it should not be mistaken as a charm offensive. Freeland is tenacious. Complex files don’t intimidate her. For those who don’t mind hearing talking points recited over and over, her message discipline is commendable. But her relentlessly chipper, briskly assertive manner can grate. Even a loyal Freeland aide said her patter throughout the NAFTA marathon had Robert Lighthizer, the U.S. trade representative who sat opposite during those negotiations, “pulling his hair out.”

Who cares? She got the deal done. Or, rather, she headed the sprawling effort that secured it. Arguably the key thing to remember about Freeland’s signature cabinet accomplishment is that a full-government effort churned along for months to make it happen. Today on the steps of Rideau Hall, after being sworn in to her new post, Freeland directly related lessons learned during the NAFTA saga to the tasks at hand.

She stressed the way she assiduously networked with all the anxious interest groups—business, unions, provincial and municipal leaders, and more—during that tense, uncertain, high-stakes trilateral process. “With the NAFTA negotiations, what journalists tended to see was the negotiation itself, and Canada talking to the U.S., talking to Mexico,” Freeland told reporters. “But that was like the tip of the iceberg. Ninety per cent of the iceberg was working very, very closely with stakeholders across the country and understanding from them what they need and what they want.”

And that sort of patient listening, she added, is what’s demanded now as a vulnerable minority Liberal government tries to build national support—including at least some Western backing—for its policies on climate change, economic growth and pharmacare. Those are three files she specifically mentioned, along with noting that she’ll retain the power to see NAFTA 2.0 across the finish line, while broadly overseeing the Canada-U.S. relationship “because that is so central when it comes to Canada’s place in the world.” (Indeed it is, and her continuing control over Canada-U.S. matters has to be kept in mind when it comes to assessing the responsibilities of François-Philippe Champagne, Trudeau’s new foreign minister.)

So, to hear Freeland sketch it, she’ll have a hand in just about everything. By contrast, renegotiating NAFTA was about one particular thing. Seeing it as a singular priority, Trudeau and his inner circle put everything they had behind not letting NAFTA evaporate. Will they invest as much in Freeland’s more diffuse bid to restore some semblance of peace with the provinces? The real question about her new role is not how much where she comes from matters, it’s how much this government is prepared to throw behind everything Trudeau is asking her to accomplish next.