What defines a 'credible quarantine plan'?

Politics Insider for April 15, 2020: Ottawa is ramping up of the Quarantine Act that's been in effect since Mar. 25, the PM announces that the feds are in talks with the provinces to plan reopening the economy, and the return of 'speaking moistly' 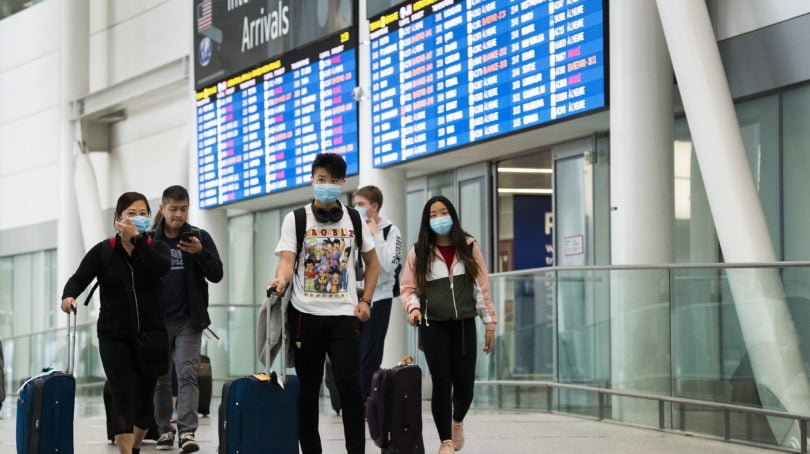 People arrive at Pearson International Airport in Toronto on March 16, 2020. Now, all people returning to Canada will have to check in to a hotel or other designated site unless they have an acceptable self-quarantine plan. (Nathan Denette/CP)

As of midnight last night, Canadians returning from travel abroad, even if they appear asymptomatic of COVID-19, will be forced to have a “credible quarantine plan,” lest they be forced to spend two weeks forcibly quarantined somewhere “like a hotel,” according to Justin Trudeau. It’s a ramping up of the Quarantine Act that’s been in effect since Mar. 25. The threshold of credibility is not exactly clear, so one expects there will be plenty of news stories in the coming days of returning travellers whose self-isolation plans didn’t impress airport security. ( Catch up on Trudeau’s full press conference from yesterday here.)

Light at the end of the tunnel. Trudeau also announced that Ottawa is in talks with the provinces to plan reopening the economy, though he warned it will still be weeks away. The multi-stage process will likely open up different parts of the country sooner than others, depending on how their health status is coming along. For his part, Saskatchewan Premier Scott Moe said his province’s plan could come as early as next week.

What would such a reopening look like? In Maclean’s, Stewart Elgie outlines three overarching rules governments should follow when planning the inevitable.

Let’s learn from experience. When we turn the corner on the COVID-19 crisis, in the coming weeks and months, Canada will make a once-in-a-generation investment in economic recovery. Let’s make sure we stimulate a smart recovery—one that puts people back to work today, while building a stronger, cleaner economy for a better tomorrow.

For now, however, Canadians can expect more of the same. Insiders tell The Globe and Mail that the Canada-U.S. border may remain closed to non-essential travel beyond the currently scheduled end date of Apr. 19. (Trudeau later confirmed that by saying it would remain closed for “several weeks.”) The pandemic will likely continue derailing every other aspect of typical government business, including the 2020 budget and much of the federal Liberals’ legislative agenda. Everything’s basically on pause.

In Maclean’s, Stephen Maher laments how Canada’s sluggish response ended up prolonging this economic ossification, especially when compared to South Korea, which is already beginning to ease on social distancing rules.

The most advanced societies are no longer the city states of Northern Italy, but the East Asian democracies, which have demonstrated their ascendance by responding to COVID-19 more effectively than Western countries have. Thus, for example, we are all masking up, although the clinical evidence for the value of public mask wearing is weak. We are doing it for the same reason that other cities followed Venice in imposing quarantines: They are doing it and getting better results.

China-bound. When Canada sent PPE to China back in February, few Canadians expressed concern. It was only after March struck, when provinces began running out of masks and gloves, that some began attacking the federal government for being so short-sighted as to give away our precious supply. The Star obtained an internal email from Jan. 31 and learned that Health Minister Patty Hajdu gave the green light to donate supplies that were already set to expire before March. Public Health Agency of Canada chief of staff Marnie Johnstone  wrote in the email, “We have some stock in national emergency stockpile (incl stuff that is expiring in feb and March) that we are able to donate without compromising Cdn supply.” The donation, made in collaboration with the Red Cross, shipped in mid-February; since then, China has returned the favour.

The return of “speaking moistly.” The phrase we all wish we’d never heard in the first place is back, thanks to Andrew Scheer, who defended bringing his family aboard a nine-seater jet to Ottawa over the long weekend. (A retraction from this newsletter yesterday: Jagmeet Singh was in fact not on the plane, and there are five Scheer children, not four. We regret the errors.) Scheer said his family was not “speaking moistly on each other,” and insists they kept their distance from one another. Trudeau faced similar criticism for spending Easter with his family, but didn’t address the criticism head-on when asked by reporters.

Relief for the North. The federal government has earmarked $72.6 million for the territories to help with the pandemic. While Yukon only has eight cases, the Northwest Territories has five and Nunavut has zero, their economies and health-care systems are already precarious and are unable to handle major disruption. The money will go toward supporting regional air carriers, ensuring food and medical supplies continue flowing, keeping local businesses afloat and funding nutritional programs.

This land is… not your land. Remember when anti-pipeline protests blocked a few rail lines for a couple weeks earlier this year and we all thought that paralyzed the Canadian economy? Oh, those quaint pre-quarantine days. Yet for the Wet’suwet’en nation, the struggle for independence over their land continues. Marie-Danielle Smith and Nadine Yousif interviewed several community members to understand whether they support a proposed memorandum of understanding, which would pave the way for formal land rights after decades of attempts in court. The catch? It won’t resolve the ever-present pipeline issue.

If an agreement recognizing the jurisdiction of hereditary chiefs over these lands is eventually reached, it would affirm a recognition the Wet’suwet’en have long sought, as well as resolve a question left unanswered 23 years after the Supreme Court laid it at the feet of government. For the Wet’suwet’en—whose communities say they are torn between determination to protect their lands and the opportunity the pipeline offers; still incredulous that their cause has seized the attention of the entire country—the upper hand in the battle for self-determination appears to be theirs.

One of us. Canadian Minister of National Defence Harjit Sajjan was spotted standing in line at a Costco, looking about as depressed as any of us. Because waiting in line is, perhaps, too boring a thing to do, conspiracy theorists had to spice it up by immediately jumping on what appeared to be a floating mystery leg between Sajjan’s own two actual legs. Photoshop, they cried ! Liberal propaganda! No cabinet minister would shop at Costco! Indeed, there is a mystery leg clearly visible—and also a mystery jacket above the leg, and a mystery arm below Sajjan’s left arm, and in fact a whole mystery person standing at a sort of weird angle behind Sajjan so they’re only partly visible. Mystery solved? Or is Maclean’s just feeding you typical mainstream media propaganda? The world may never know.