Where will Rob Ford's votes go?

Ford's illness will change the mayoral race, but not how you think 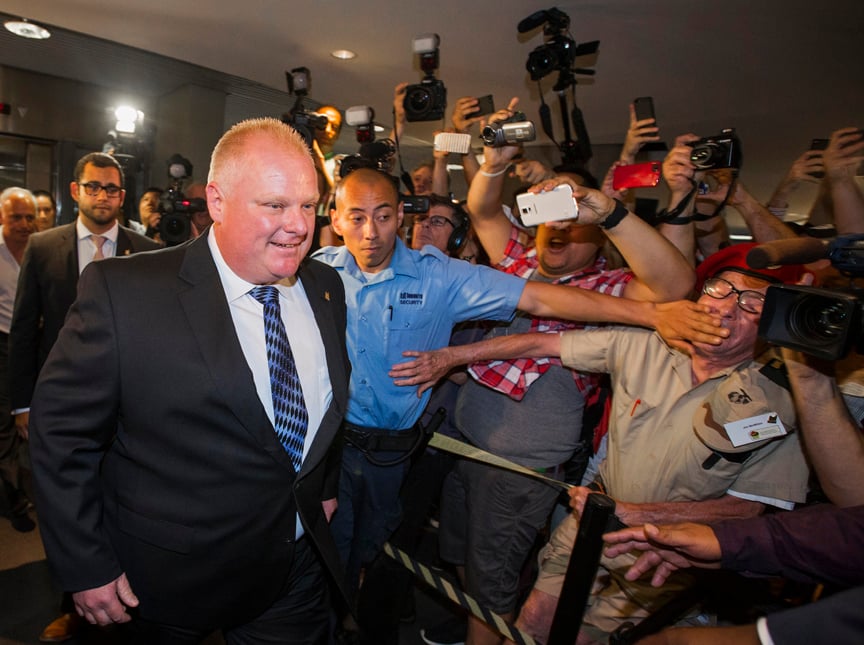 Update: An ailing Rob Ford dropped out of the race Friday. Doug Ford has entered the race for mayor.

The possibility that Rob Ford is too ill to campaign raises a question every bit as pressing to him and his family as to Torontonians: Where will his votes go if he withdraws?

It’s an issue the Fords must consider even as they await tests to determine the type and nature of the tumour in the mayor’s abdomen. The deadline for withdrawals or additions to the Oct. 27 ballot is Friday. If Ford is to step out—and if his brother Doug, the city councillor and manager of Rob’s campaign, is to take his place—they must make the call in short order. One way or other, their decision could have enormous influence on the rest of the campaign.

That’s because Ford still pulls a swath of the vote capable of swinging the election. The most recent polls place him in second, with 28 per cent support compared to 40 per cent for front-runner John Tory and 21 per cent for Olivia Chow.

Political logic suggests Tory stands to gain the most should Ford bow out—his centre-right platform comes closer to Ford’s than Chow’s. The little relevant information we have would seem to bear that out: At the end of July, when pollsters with Maple Leaf Strategies asked Torontonians to name a second choice, 30 per cent of Ford supporters chose Tory, compared to 19 per cent who opted for Chow.

But it’s not quite that simple.

Much has changed, after all, since mid-summer, starting with Chow’s unexpectedly fast fade. From the moment her campaign showed weakness, say pollsters, her support began hemorrhaging to Tory. Evidently, those voters believe he has the best chance of stopping Ford.

Subtract that anybody-but-Ford imperative, says Lorne Bozinoff, president of Forum Research Inc., and you have a much different contest. “The whole strategic voting dynamic goes away,” says Bozinoff, whose firm has been charting support since the start of the campaign. “It would still be an interesting race.” Back in June, for instance, while Ford was in rehab, Forum asked voters who’d they’d choose in a two-way race between Chow and Tory, and Chow picked up a surprising five percentage points from Ford’s absence. That’s not as much as Tory’s nine points, but placed her firmly in the winning position, with 47 per cent support.

Again, much has changed. But at the very least, says Bozinoff, a withdrawal by Ford could shake loose the debate. Tory could swing right, thinking the Ford Nation is out there for the taking and he doesn’t need to battle Chow for progressive votes. Chow, in turn, might appeal to the anti-elitists among Ford voters by amping up the rhetoric painting Tory as an avatar of the rich and powerful.

Of course, that assumes Ford Nation will vote at all. Back in 2010, voter turnout in the Toronto election reached its highest point since it was amalgamated in 1998. Ford, it later emerged, had tapped a constituency that doesn’t typically find its way to a municipal ballot box: Young, working-class people with relatively low incomes. Many were immigrants; many lived in the city’s inner suburbs. He’d also motivated a whole lot of opponents, who also turned up at the polls in force.

Without the incumbent in the picture, in all his divisive, provocative glory, will those people be back on Oct. 27?

Almost certainly not. Nearly half of Ford supporters in the Maple Leaf poll, it is worth noting, said they did not have a second choice. For them, it was Rob Ford or no one.

These are precisely the tea leaves that the Fords must now read as they contemplate their next move. They could add Doug’s name to the ballot and remove Rob’s, hoping Ford Nation will rally around the elder brother (past polls suggest Doug inspires nothing near the voter enthusiasm Rob does). They could both run, allowing Doug to participate in debates and preach the tax-cutting gospel while Rob convalesces. They could leave things as they are, hoping Rob’s condition is operable and that he can return to what was fast becoming a two-way race between him and John Tory.

Or they can step aside, allowing an ailing man to focus on fighting his illness, which at this early stage seems a sensible course. To do so might benefit one of their rivals, but not nearly so much as it would help Rob Ford.