What happens in a hung Parliament

On May 2, 1985, the Conservatives won a provincial election. But the Liberals and NDP won more seats. Six weeks of negotiations followed. 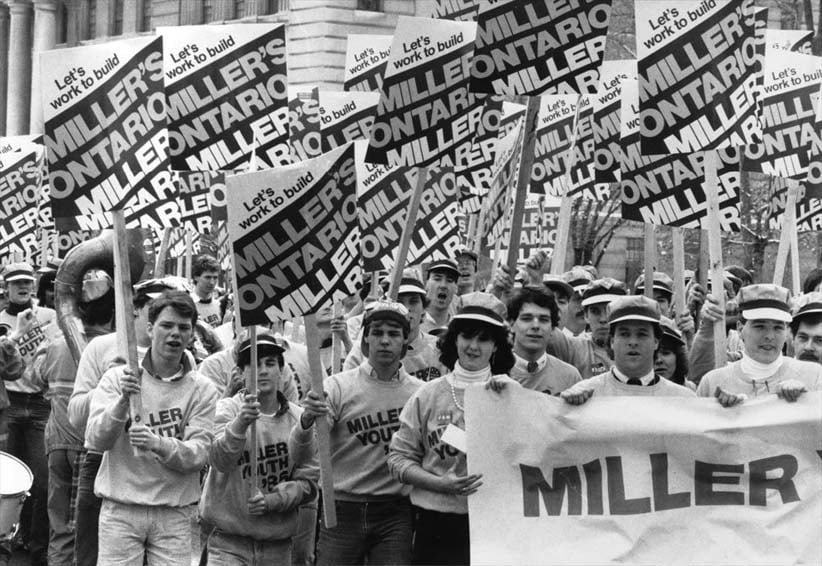 To understand everything that might happen on Parliament Hill after Monday night, you need only understand what happened at Queen’s Park in 1985. Thirty years ago, the Ontario electorate delivered to itself a perfectly unclear election result, the epitome of what has come to be known as a hung Parliament. What followed was at least an enduring lesson in civics and the parameters of our democratic system of representation.

On the night of May 2, 1985, the results showed 52 seats for Ontario’s Progressive Conservatives, 48 for the Liberals and 25 for the NDP. PC leader Frank Miller, the incumbent premier, could claim a victory. But it was Liberal leader David Peterson who ended up premier.

It would take six weeks for the elected members of the Ontario legislature to settle the result. The basic sequence of events is as follows. (I am indebted here to two books for their accounts, Rosemary Speirs’ Out of the Blue and Bob Rae’s From Protest to Power.)

The day after the election, Miller and Peterson both spoke with Rae to discuss the possibilities and, after a meeting of the NDP caucus, negotiators for the NDP were dispatched to meet with negotiators for the PCs and Liberals, respectively. Those negotiations began on May 13. Two weeks later, Rae announced that, as a result of those negotiations, the NDP would be supporting the Liberals, and, on May 29, the parties signed an accord that set out political reforms and legislative measures that would be implemented over the following two years.

Miller did not resign, though. Instead, as was his right, he chose to face the legislature. On June 4, the PC government presented a new Throne Speech, notably packing it with progressive proposals. Undaunted, Peterson, seconded by Rae, moved an amendment declaring that the legislature had no confidence in the government. On June 18, the government was formally defeated. On June 19, Miller met with John Black Aird, the lieutenant governor, to resign, and Aird then invited Peterson to form a government.

Aird released a statement to explain. “In my capacity as lieutenant governor of Ontario, and as the representative of Her Majesty the Queen in Ontario, I have this day asked Mr. David Peterson to form a government, he having assured me that he can form a government which will have the confidence of the Legislative Assembly for a reasonable length of time.”
That is, conceivably, what could happen again in 2015.

As basic civics, it’s pretty much all there. First, the incumbent government remained in office until it resigned, just as Stephen Harper will remain the Prime Minister unless, or until, he resigns, regardless of Monday night’s result. Second, while the PCs “won” the election, insofar as they finished with the highest number of seats, the ultimate measure of authority is the ability to command the confidence of the legislature. And, ultimately, it was Peterson, not Miller, who had the support of the Ontario legislature.

Beyond those basics, there are details to consider, particularly for the sake of thinking about what the country could wake up to on Tuesday morning.

Beyond the (relatively) simple question of parliamentary legitimacy, there can be a question of political legitimacy, so context can matter. A similarly narrow result on Monday—imagine the Conservatives, Liberals and New Democrats finishing in the same order—could increase public support for a similar arrangement. Conversely, if the Conservatives were to finish first, with 40 more seats than the next party, the public might be less inclined to support an alternative.

“Whatever is done, you’ve got to be prepared to explain, and there are what I would call some conventions of legitimacy—and they’re hard to define,” says Sean Conway, the former Liberal MPP who was a negotiator for the Liberal side. “One of the arguments we made was: Well, yes, Frank Miller has four more seats, and we’ve got more of the popular vote, so this is a classic hung Parliament. I think a fair-minded person would say this is a true minority Parliament. So the question is: Where does the balance of power go?”

In 1985, the Liberals ran on a decidedly progressive platform, which overlapped significantly with the NDP’s policy priorities. This was important when the two parties sat down to negotiate, but it might have also helped to make the case for an arrangement. “It meant that when we came to negotiate between the two parties, we had enough to fill up several legislative agendas that we could agree on. And when we talked to the public, when we talked to the lieutenant governor, we were able to say that, yes, we may not have gotten the most seats in the legislature, individually, but we had gotten, between us, something like 62 per cent of the popular vote on platforms that were similar,” says Hershell Ezrin, chief of staff to Peterson at the time and one of the Liberal negotiators. “So we had some moral authority, if you like.”

The members of the NDP caucus were split on pursuing a coalition with the Liberals—that is, an arrangement in which the cabinet would have included both Liberals and New Democrats. For their part, the Liberals were not keen on a coalition with the New Democrats, so the result was an accord setting out a series of measures on which the NDP would support a Liberal government. In 2015, that example could come in handy, as the Liberals have repeatedly dismissed the possibility of forming a coalition with the NDP.
(Once the deal was agreed to in 1985, the Liberals informed Rae that there would not be a joint signing ceremony. The Liberals wanted to make it clear to the public that one party would be the government. The architects of the 2008 coalition agreement between the federal Liberals and NDP might have heeded this example before they invited Bloc Québécois Leader Gilles Duceppe to their signing ceremony.)

Rae was keen to establish a formal, written agreement and hoped to get away from the day-to-day “Russian roulette” of a typical minority Parliament, where the governing party tables legislation and either hopes to win support or dares the other parties to defeat it and risk launching an election. “There were people inside the NDP at the time who were opposed to any formal arrangement. The problem I felt was that, if we didn’t have a formal arrangement, we wouldn’t necessarily persuade the lieutenant governor that another government could work,” he says. “And we needed to get away from the notion that minority government meant instability. That was a very important principle, that if you associate minority government with instability in people’s minds, then people will always get pushed into saying, ‘Let’s have a majority.’ ”

Personal familiarity and relationships between the Ontario Liberals and New Democrats—Rae and Ezrin were friends and Rae and Peterson had known each other for years—likely assisted the negotiations, and, afterward, there was regular communication between the parties to discuss the agenda and the government’s progress.

“I think, ultimately, that was the great test of the arrangement,” says Ezrin. “We were careful not to give them any view that we were somehow trying to do something that had not been agreed to. We introduced other pieces of legislation that hadn’t been on the list, but the point was we never tried to do anything that was a surprise. This was no drama. There was a lot of time expended on maintenance.”

For fans of constitutional convention, there are at least two interesting footnotes.

First, according to Speirs’ Out of the Blue, Frank Miller considered asking the lieutenant governor to dissolve the legislature and call a new election, but declined to do so after it was explained to him that public support for the PCs had dropped even further, and that the party would revolt if he attempted to lead it into another election. The lieutenant governor might have refused that advice–particularly since Miller had not demonstrated that his government had the confidence of the legislature—but, since he never asked, he at least deprived history of a precedent.

Second, Rae met twice with the lieutenant governor, both times at Rae’s request, in one case to provide Aird with a copy of the Liberal-NDP accord. That a lieutenant governor would meet with a party leader other than a current or prospective first minister is perhaps an interesting precedent.

The sheer amount of time it took for the Liberals and NDP to come to an agreement is also worth considering. In the life of a province or a country, 27 days is hardly an arduous duration, but, in the Twitter era, with current levels of patience, four weeks might seem like an exhausting eternity. Even in 1985, there were daily demands for resolution.

“The main lesson is just to keep your cool and be creative,” Rae says. “It’s a real pressure cooker after an election, if you get into that kind of a result. It was difficult for us—and for me—to basically hold people off. The press was saying, ‘Well, what are you going to do?’ Like, every day, every minute, every second, every phone call, every scrum. And I just said, ‘We’re going to take our time. We’re going to look and see, we’re going to assess the situation. There’s no panic here, there’s no reason for anyone to jump off a bridge. It’s just going to take a little while to sort this out. And also to be creative, to try to figure out what is the wisest and best course.’ ”