What happens next in B.C.

The Greens and NDP now have a window to change the government of B.C.—but it's about to slam shut. 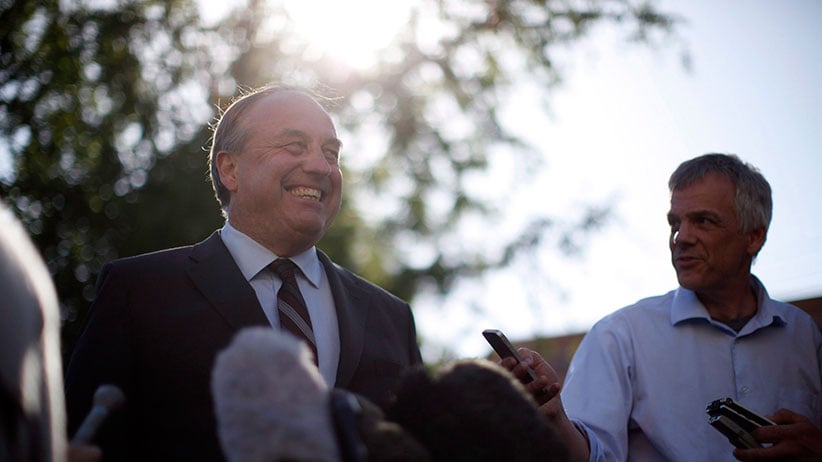 Andrew Weaver says he wants to end the uncertainty over who will govern B.C. by reaching a deal with either the NDP or Liberals by Wednesday. (Chad Hipolito/CP)

So the recounts are over in the super-tight British Columbia provincial election, with no changes to the seat count: 43 Liberals, 41 NDP, 3 Green. It’s obvious that (Greens + anybody else) = viable majority in the 87-seat legislature. So now what?

Green Party leader Andrew Weaver, no fool, is speaking to both parties, trying to maximize his advantage. Liberal leader Christy Clark says she’ll advise the lieutenant-governor by Wednesday whether she intends to try to form a government. I’d be astonished if she didn’t try: she has more seats than any other party, and is said to be politically ambitious. And she’s talking like someone who plans to tough it out: “With 43 B.C. Liberal candidates elected as MLAs, and a plurality in the legislature, we have a responsibility to move forward and form a government,” she said in a media release.

But Weaver is also talking to NDP leader John Horgan. And in a statement Wednesday, he said he looks forward to working “with both other parties,” which sounds, for the time being at least, like the distinct absence of a preference between them.

Now here’s what I need you to understand: the two cases—Greens+Liberals and Greens+NDP—are not symmetrical. The next government is not a coin toss or a Schrödinger box. There is, indeed, no “next government”—there is, still today, a Liberal government in B.C. Christy Clark gets to keep governing as long as she’s able. And the other parties have a very narrow window for replacing her without another election.

Now, it’s almost always so obvious who’s won an election that the resignation happens on election night or in the days after. Stephen Harper could have returned from the 2015 federal election and tried to present a Throne Speech and a legislative agenda, but pretty soon the Liberals would have said, Hey now, we outnumber you 184 to 99, stop that. Even in narrower cases, the loser still loses. Paul Martin was still the incumbent prime minister on the night of the 2006 election, and his Liberals plus Gilles Duceppe’s Bloc would have outnumbered the Harper Conservatives, but that was ridiculous and Martin resigned on election night.

RELATED: Why the B.C. Green party should be wary of a coalition

It’s when things are very close that this notion of “testing the House (or legislative assembly)” starts to matter a lot. Take Quebec in 2007. Jean Charest’s Liberals lost 28 seats and wound up with 48 to 41 for Mario Dumont’s Action Démocratique. The PQ had a great big 36-seat balance of power. It would have been easy for the PQ to withhold confidence in Charest’s government and cook some deal to make Dumont the premier. Easy, but galling for the prideful PQ, so they passed, and Charest got to keep governing.

Well, surely at some point the PQ could have changed their minds and withdrawn support for Charest? Yes— but the convention, or deeply entrenched habit of things, is that opposition parties don’t have forever to get their acts together and propose an alternative government. In fact, they don’t have very long at all. They basically get one chance to propose an alternative to the incumbents and test that alternative in a confidence vote. And they don’t even get to decide when that vote happens, because it happens immediately whether they’re ready or not.

This is a little more confusing, so it helps to remember the odd events after the 2008 federal election. Stephen Harper won a plurality of the seats, again, as in 2006. Liberals plus NDP plus Bloc, together, outnumbered him, although their hand was so weak that it took almost all of those three caucuses to do so. Jack Layton tried to persuade his opponents in the other opposition parties to do something bold, fast. They shrugged him off. It wasn’t until five weeks later that they decided to co-ordinate.

But by then it was already too late to simply write to the Governor General and replace Harper with Stéphane Dion. As the Conservatives immediately started reminding everyone, the opposition parties had voted in such a way as not to defeat the government on its throne speech. So they had effectively acknowledged its legitimacy to govern.

Harper promptly asked the Governor General, Michaëlle Jean, to prorogue the House rather than holding the confidence vote Dion was demanding. She obliged. Even though what he was asking was highly dubious and entirely self-serving. 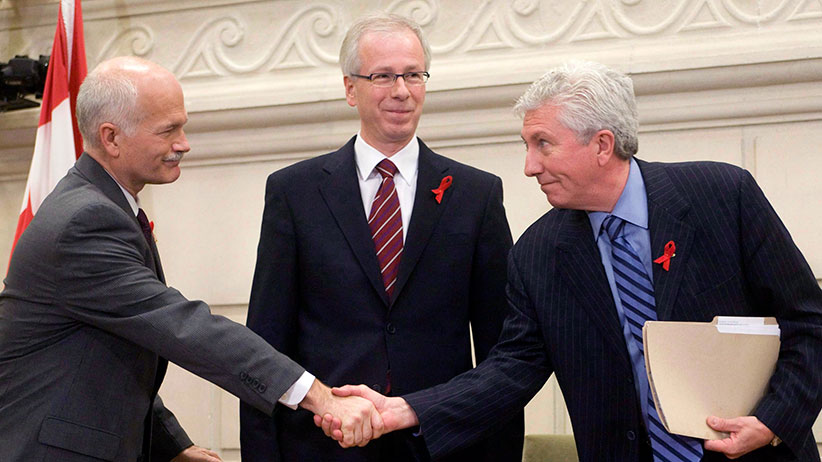 From left: Layton, Dion and Duceppe after signing their agreements to co-operate in December 2008. (Adrian Wyld/CP)

People who never liked Harper are still mad at Jean for doing his bidding. But it is the GG’s job (or the LG’s job in a provincial capital) to do what the head of government asks. It’s called responsible government. We had a whole crisis over it in 1849. Ask your kids.

So can Clark govern forever without a worry? No. Her government can fall at any time to a confidence vote, but if it falls any time after the very first few days it governs, convention demands that the legislature be dissolved and the question be put to the voters in a new election.

That’s why the anti-Harper coalition fell apart by early 2009: its leaders knew they couldn’t defend what they were doing in an election, and the GG had already signalled she wouldn’t hand power to them without a new election.

But the best demonstration of this notion is the Ontario provincial election of 1985. The province’s eternal Progressive Conservative government, now in the hands of cheerful Frank Miller, fell to 52 seats. The Liberals under David Peterson had 48—so close. The NDP under Bob Rae had the whip hand with 25 seats. Miller prepared to govern. Naturally assumed he’d be able to govern with no problem. But the Liberals and NDP cooked a deal whereby Peterson could govern as premier and the NDP would promise not to withdraw confidence in this new government for two years.

What’s crucial to remember is that the deal was concluded immediately, before Miller could present a throne speech, and that while Miller managed to avoid holding a vote in the legislature for several days, the first vote on amendments to the throne speech was the chance Liberals and NDP needed to vote against the Conservatives. And David Peterson became premier. Miller had threatened to call an election, but decided against it.

So the window for replacing an incumbent government without an election is very short. It is probably measured in a small number of weeks, and in a single vote in the legislature.

RELATED: The next few days in B.C. politics will be strange and fun

And she will have no patience for an extended round of futzing about, because like every modern LG and GG, she will view a new election as vastly preferable to any improvised solution she might dream up. A new election won’t hurt anyone; we have elections all the time in Canada. An Erector-Set government cooked up in Mom’s basement by an improvising viceroy might.

What does this mean for Andrew Weaver? It means that if he wants to work, over any extended period of time at all, with “both other parties,” then he will be working with a Liberal government and an NDP opposition.

If he prefers an NDP government, he needs to make that decision before next Wednesday. He and Horgan need to inform the LG that they are prepared to govern, and at the first vote on any matter in the legislature, they need to vote together against the Liberals. Guichon would take that as her cue that the election actually changed the situation, and she would invite Horgan to form a government. But that would be Horgan’s only chance, until the next election, whether that came in two months or four years.

There are no guarantees. But the strong advantage is Christy Clark’s.