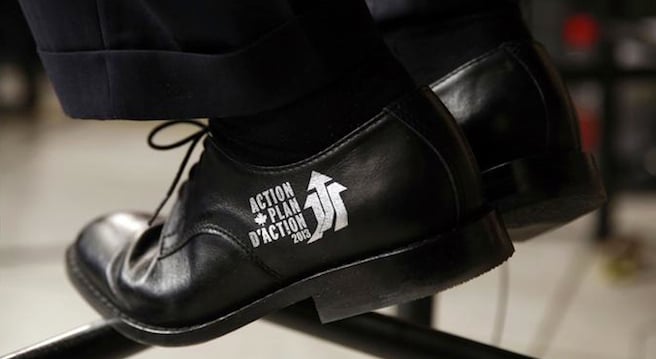 I work in Ottawa and I try to stay on top of things, but this was news to me. In fact, I didn’t even notice it until four days after Finance Minister Jim Flaherty released his—er—plan on March 21. Of course, there was much chortling in the press gallery at the government’s insistence on calling its annual account of revenues and expenses something besides a budget. But the significance of the thing took a while to sink in. Flaherty and his boss, Stephen Harper, do not call their big annual document a “budget” anymore because it is no longer a budget.

A budget, as anyone who has tried to run a household knows, is the moment when you stop telling yourself soothing tales and inject a note of reality into your life. On page 64 of the 1997 budget, for instance, the government of the day gave us an “outlook for program spending” with multi-year projections for spending levels in defence, Aboriginal programs, “business subsidies” and so on. It was that straightforward.

Harper’s Economic Action Plans, by contrast, are carnivals of fantasy. EAP13— we will use the government-approved hashtag, which I assume is pronounced to sound like a shriek of terror—is 200 pages longer than Budget 1997 but finds no room for a one-page program-spending outlook, nor indeed for a program-spending outlook of any length. Like the best funhouses, this one depends on its volume for much of its amusement value. The decision to merge CIDA into the Foreign Affairs Department is announced on the 31st page of a chapter on “supporting families and communities,” and I can only assume it is there as a reward for perseverance. The morning after Flaherty’s speech, a diplomat asked me how it is possible for a G7 country to release a budget that does not at any point say how much the government will spend on defence next year. I gave the fellow a long answer. I should have said his premise was wrong, because—stop me if you’ve heard this— it’s not a budget.

Not only does the budget not say what the government is spending, it does not say where it plans to stop spending, because that, too, would spoil the fun. Scott Clark and Peter DeVries, former senior finance-department bureaucrats, spotted another Easter egg tucked away on page 226 of EAP13: “The Government will introduce legislation as needed to consolidate operations and eliminate redundant organizations.”

This is not mere talk. Last year’s EAP closed the Rights and Democracy agency and the National Roundtable on Energy and the Environment, and the shutdowns did not stop there. My colleague Aaron Wherry has been keeping tabs on our website on what he calls “the quiet cuts.” In February, the Coast Guard station in Kitsilano, B.C., and eight Veterans Affairs offices closed. In October, nearly 100 employees at the National Research Council were told they may no longer be needed. Water-quality sampling in the North has been reduced, as has Via Rail staffing, emergency preparedness, the Federal Tobacco Control Strategy and programs to rehabilitate young offenders. The Kluane Lake Research Station in the Yukon is closing. There are dozens more examples. Not only are most of these cuts not announced, the government works hard to keep news of them from escaping. While Flaherty was playing his annual shell game in the Commons, Kevin Page, the parliamentary budget officer, was spending his last week in that job in court, trying to get details of the previous round of cuts. Page’s term ran out a few days later; the government no longer has to worry about him.

After the 2012 EAP, there was a good deal of grumbling among Conservatives, including some I know who have sat behind the Prime Minister in the Commons. What the hell is this? they said. We fought and waited and bit our tongues for a decade so we could have a Conservative majority in this country, and we get so little for it? This year, there is less such internal grumbling, at least over budget questions, because Harper’s caucus is on to him: just because he doesn’t announce a conservative agenda doesn’t mean there is none.

Though the title of Flaherty’s annual show changes, one feature remains constant. Direct federal program spending has been held flat in real-dollar terms since 2010, which means that, as the economy grows and programs become more expensive to deliver, there is an inevitable pressure to cut. The result is the federal government’s gradual retreat from Canadian public life. It’s really gradual, but it is starting to be the hallmark of Harper’s career at 24 Sussex Drive.

There is a constituency for that direction. Millions of Canadians have had enough of governments deciding every problem needs more government. I believe that if Harper announced, explained and defended his agenda in detail, he would find much support. But that has never been how he rolls.

If there is a place where reporters gather for information, it is never long before Harper starts to wonder why they are allowed to gather or be given information. In 2004, he asked his staff why he should have dozens of reporters following him on planes and buses as he campaigned. (By 2011, he had found his answer: as long as they were kept on the bus, he could go about his business elsewhere and they would not bother him.) In 2006, he closed the corridor outside the cabinet room so we could not wait there to ask his ministers questions. It has been years since he gave a news conference on Parliament Hill without a visiting foreign leader beside him to take half of the very few permitted questions. [UPDATE: That’s wrong. He gave a particularly robust press conference in December to announce his CNOOC-Nexen decision. — pw]

By 2011, many of his problems had to do with details of spending, either real or proposed: on F-35 jets, on baubles in Tony Clement’s riding during the G20 summit, on the cost of criminal-law enforcement. And yet every year, dozens of reporters streamed into an Ottawa conference centre to learn details of Harper’s plans on just such sensitive files. It was only a matter of time before the temptation to lead the gallery on another wild goose chase became overwhelming.

Harper has never been fond of fair fights, because he believes a cabal of Liberal-sympathetic reporters and academics and professional groups will ensure he never gets to fight a fair fight. He prefers to be judged on results, dimly understood, much later, after he has done what he came to do. The problem is that, while he is making it hard for Kevin Page and Paul Wells to find out what is happening to your tax dollars, he is making it hard for you, too. If you trust him, no problem; but you are just going to have to trust him, because there are fewer and fewer mechanisms that allow us to verify.

In January, Harper took members of his caucus to an Ottawa movie house to see Steven Spielberg’s biography of Abraham Lincoln, which features Daniel Day-Lewis as the 16th U.S. president lecturing his cabinet: “I am the president of the United States of America, clothed in immense power. You will procure me these votes.” A Canadian prime minister has more power, in his modest sphere, than an American president. The votes Harper needed were procured for him on May 2, 2011. He will seek some more votes in 2015, and in the interim, we are left to guess.