What if Donald Trump has a point with Chrystia Freeland?

Andrew MacDougall: It is possible that by going to Washington to needle Trump, Freeland's tactics have not been helping Canada’s cause 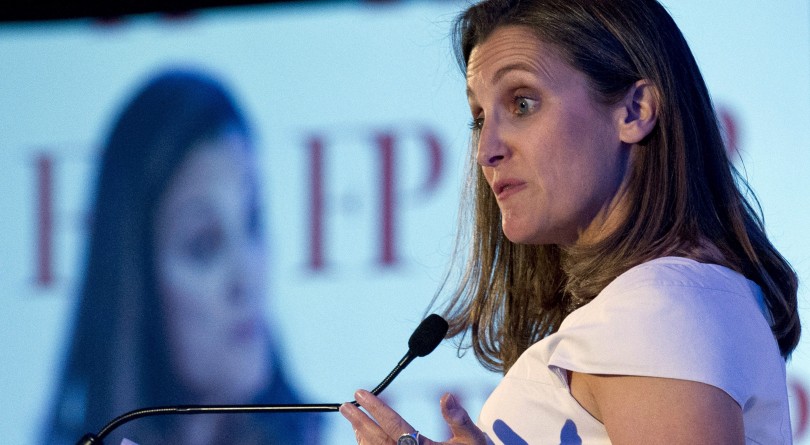 To absolutely no-one’s surprise, it turns out Donald Trump still doesn’t like Justin Trudeau. When asked about the Prime Minister yesterday at his performance art press conference, the U.S. President recounted how he had rejected a request from Trudeau to meet on the margins of the U.N. to talk NAFTA, an interpretation of events the PMO quickly dismissed as at odds with reality. For good measure, Trump also revived his threat to levy tariffs on the Canadian auto sector.

Why is Trump opting for war instead of some jaw-jaw with Trudeau?

Well, according to Trump, “[Trudeau’s] tariffs are too high, and he doesn’t seem to want to move, and I’ve told him ‘forget about it.'” The “it” in question being NAFTA and its narrowing window for resolution in 2018.

But it turns out Trump was only warming up. He also had some choice words for Chrystia Freeland, Canada’s definitely not chopped liver Foreign Minister, saying: “We’re very unhappy with the negotiations and the negotiation style of Canada—we don’t like their representative very much.”

Wait a minute, what? Is this the Chrystia Freeland who takes fashion suggestions from her children, invites G-7 foreign ministers to her house for waffles, and brings reporters popsicles while they’re baking in the late summer Washington heat? Yep, one and the same.

But how could anyone not like such an accomplished politician, one who has won many plaudits over the course of her professional and political life? Such, at least, was the response of much of the Canadian commentariat to Trump’s broadside, many of whom leapt to Freeland’s defense on Twitter.

Does Trump dislike Freeland because she’s a woman? Is it because of her outspokenness on Russia and Ukraine, and the fact that she’s under sanction by the Russian regime? Or is it that she’s just bloody good at her job and refusing to cede any ground in what is a tough negotiation?

It could be any or all of the above. But here’s a heretical thought: What if it’s none of the above? In other words, what if Trump has a point? What if Freeland hasn’t been helping Canada’s cause?

First, a clearing of the decks to ensure a fair hearing. I am not a fan of the current American president. I believe he is a stain on principled conservatism, an ignorant bully several stops short of the station he has achieved in life.

But that doesn’t make President Trump wrong on every point. Nor does pointing out Trump’s awfulness at every opportunity make it the correct course of action. Sometimes a little white lie, or a truth left unspoken, is the grease needed to get a result, especially when you need a positive outcome on a file as important as NAFTA.

So, how could Trump have gotten the wrong impression about Freeland? Let us count the ways. But first, a bit of backstory.

Things were relatively conflict-free on the NAFTA front—if not necessarily progressing well—until May of this year. Regular negotiation sessions were being held, and Trudeau’s government had its Senate, House and state ducks all in a row. Despite this work, negotiators still missed the window to get the deal redone under the president’s existing “fast-track” trade authority.

This miss was soon followed by the imposition of Trump’s spurious tariffs on Canada’s steel and aluminum, which then begat Canada’s pledge to impose retaliatory measures. Things were getting nasty.

The looming trade spat certainly soured the mood at the outset of Trudeau’s June G-7 in Charlevoix, before producing a full-on detonation from Trump after the Prime Minister had the temerity to repeat previously-made comments on Canada’s willingness to stand up for itself in the face of bullspit tariffs levied under the guise of “national security.”

When Trudeau was subsequently attacked in the press by Trump consiglieres Larry Kudlow and Pete Navarro, it was Freeland who leapt to Trudeau’s defence, saying: “Canada does not conduct its diplomacy through ad hominem attacks … and we refrain particularly from ad hominem attacks when it comes from a close ally.”

Four days later, however, Freeland put paid to that by popping up in Washington D.C.—Donald Trump’s backyard—to receive an award as “Diplomat of the Year.” And while there wasn’t any pure ad hominem on offer in Freeland’s acceptance speech, there was a fair share of pissing on Trump’s rug.

“And within the club of wealthy Western nations, we are seeing homegrown anti-democratic forces on the rise. Whether they are neo-Nazis, white supremacists, incels, nativists or radical anti-globalists, they seek to undermine our democracies from within.”

A reasonable person—to say nothing of an unreasonable one like Trump—could easily interpret this as a shot across Trump’s bow and a dig at his supporters. Indeed, most observers did, including many in the press. There is no way it was said without knowing who it would anger.

And it was only the beginning. Freeland pressed on:

“Authoritarian regimes are actively seeking to undermine us with sophisticated, well-financed propaganda and espionage programs,” Freeland said, later on adding: “it means resisting foreign efforts to hijack our democracies through cyber meddling and propaganda.”

Now anyone who follows Trump on the Twitter machine knows he gets a bit touchy when the subject of authoritarian regimes undermining Western democracies comes up, what with the conventional wisdom being that Russia helped to put him in the White House. And while Freeland’s words here are undoubtedly true in the general sense, they were also deliberately chosen, knowing full well the impact they’d have on the psyche of the occupant of 1600 Pennsylvania Avenue.

Was the Liberal government honestly expecting them to help grease the NAFTA wheel? Why not just egg on Robert Mueller while you’re at it?

But don’t some home truths simply need to be spoken? Isn’t democracy worth the risk? Besides, didn’t Stephen Harper once tell Vladimir Putin he needed to get the hell out of Ukraine?

Yes, Harper did. But Putin had invaded another country, not just angered his closest allies by imposing some whack tariffs. More to the point, Harper didn’t have critical skin in the game in the form of an essential economic trade agreement with Russia. Freeland and Trudeau do, which makes the next Freeland speech excerpt even more ill-advised:

“Angry populism thrives where the middle class is hollowed out, where people are losing ground and losing hope, even as those at the very top are doing better than ever. People feel their economic future is in jeopardy—when they believe their children have fewer opportunities than they themselves had in their youth, that is when people are vulnerable to the demagogue who scapegoats the outsider, the other, whether it is immigrants at home or trading partners abroad.”

It might all be true. But does any sentient being think the above section wasn’t written explicitly in reference to the United States and Trump? And even if it doesn’t, does anyone think Trump could be blamed for thinking it’s about him? He thinks everything is about him. We know this. Whatever the case, Freeland had to know her words would get back to Trump. And again, did she think they would help or hinder NAFTA?

Put differently, how do people think Robert Lighthizer coming to Ottawa and dumping all over Trudeau’s “progressive” trade agenda would be interpreted? No matter what your position is on the policy, there is such a thing as form. Politicians rarely go to each other’s backyards to set off flares. And if they do, they do it deliberately, knowing full well the impact those words will have.

Of course Freeland knew her speech in Washington would rankle, just as she knew her appearance on a panel titled “Taking on the Tyrant” a few weeks ago would grate. But she did it anyway.

And now here we are, with NAFTA in limbo and an angry U.S. President. And while Freeland might have strong domestic support and the support of the bien-pensants in her war of words with Trump, it’s Trump that has the future of NAFTA in his hands.