What if Jagmeet Singh really did have a $5.5 million mansion? Should we care?

David Moscrop: Democratic socialism is about making the structures of society more fair. What left-wing leaders own, and what clothes they wear, tells us nothing about their commitment to it 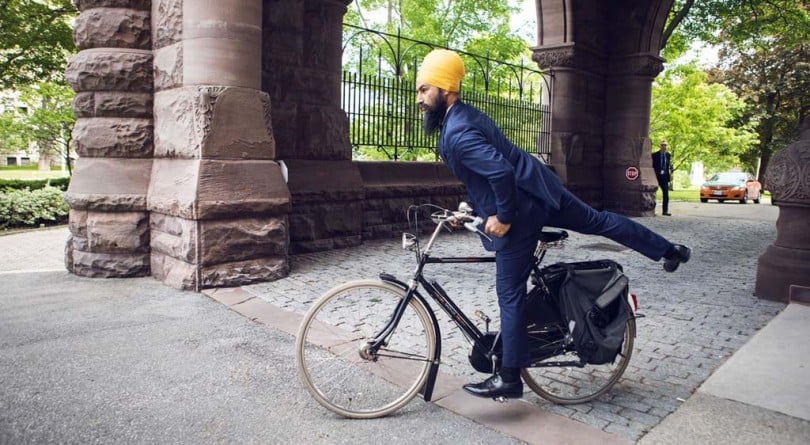 Singh in his former role as an Ontario MPP; even then, he blended left-wing politics with a penchant for fine three-piece suits (Photograph by Jennifer Roberts)

Last week, a bogus article posted by an online advertising network on the Vancouver Courier website claimed that federal New Democratic Party leader Jagmeet Singh lives in a $5.5 million-dollar luxury mansion. The click-bait post is hooey and raises questions to which, as the Tyee reports, we ought to get answers. It’s an election year, Singh is currently contesting a by-election that may determine his political future, and Canada is about to face a test that will reveal whether it is prepared to manage digital threats to its democracy. So, who made the ad, why, and how it managed to crawl out of the dark corners of the internet and into the light of day are important concerns.

The post also raises another question: Why should anyone care if Singh does own such a home? (Again, he doesn’t.) Or, for that matter, why is it inconsistent for him to be a social democrat (or even a socialist) and wear custom suits and a Rolex while driving a BMW or riding a designer bicycle?

Last fall, rookie congresswoman Alexandria Ocasio-Cortez was photographed wearing an expensive suit. The right, suddenly discovering class politics, attacked her as a hypocrite. “How can a ‘socialist’ own something nice?” they howled. “Moreover,” they asked, “How dare she wear it for all to see?” The whole kerfuffle was as disingenuous as it was motivated by schadenfreude and other considerations born of complicated feelings. The suit Ocasio-Cortez wore was provided to her—on loan—for a photo shoot. But, again, the affair raised a question that we in North America have yet to ask answer: Why should anyone care if a socialist or social democrat owns something nice?

RELATED: The NDP’s response to the Venezuela crisis has become an unfunny farce

There’s a perceived tension in contemporary leftist politics between old labour leftism as it’s imagined to exist on the factory floor, and the so-called champagne socialism of urban professionals. In the lazy mind, there’s a stubborn notion that if you’re going to advocate for equality, if you’re going to press for the democratization of the economy, then, boy, you’d better do it in sackcloth and ashes while strumming Woody Guthrie songs on a beat-up guitar. Some version of that debate does exist on the left but it doesn’t define the movement so much as complicate it, which is to be expected. Every association has its internal divisions. Externally, however, the left is held to a different standard than the rest.

In Canada, it’s acceptable—though not compulsory—for prime ministers from the conservative and liberal traditions to be wealthy. And a few have been. The implication is that, if you’re going to lead a country, it’s all the better to have accumulated capital because it demonstrates competence. But the idea that a New Democrat might be well-to-do is a liability—it flags them as a hypocrite and, quite possibly, a class-traitor on their own terms.

The wealth double-standard is silly. Socialism and social democracy aren’t premised on the idea that socialists and social democrats ought to play by different rules from the rest. Each is built around (sometimes different) claims about what is structurally just and desirable when it comes to ownership and redistribution. Socialists and social democrats don’t argue that Jagmeet Singh ought not to own a nice home (even a very, very nice one) or that Alexandria Ocasio-Cortez ought not to own a designer suit; they argue that social, political, and economic spaces ought to be democratized to ensure basic standards of equality are met for everyone. They are more concerned with who tends to own the tools and resources used to produce wealth than who owns the run-off from that wealth.

Questions about wealth and the left create image problems for a movement competing against well-heeled centrist and right-wing blocs. It’s an old strategy used to undermine egalitarian politics and it’s proven to be persistent and pervasive. Indeed, we are so far through the looking glass that these concerns are raised when considering even basic belongings—forget a luxury mansion or designer accoutrements. It’s common for socialists or social democrats who call for making the lives of the marginal better to be met with “How can you ask for that while you do or own this” where “this” tends to be the common trappings or ambitions of the vast majority of human beings around them, like a car or even a cell phone. It’s as if those who fight for egalitarian systems are meant to start their struggle by disadvantaging themselves and making their endeavour as difficult and uncomfortable as possible on principle.

The left might never shake the perception that personal material success by a leftist in a system that encourages, expects and demands such an accomplishment is a liability. But it should try. And those from the centre and right who wish to engage in good faith should try, too. If, someday, socialism or deep social democracy are achieved, and those who advocate for egalitarianism then defect from the structures that make such an order possible in a bid to maintain their personal wealth, then it’ll be fair game to take them to task for hypocrisy.

Until then, we should bracket the matter of who owns what and instead focus on what sort of systems and institutions are the most just, fair and desirable—and how we might go about building, improving and preserving them.