A viral photo suggests Canada is a welcoming place for those seeking asylum. But how welcoming are we? 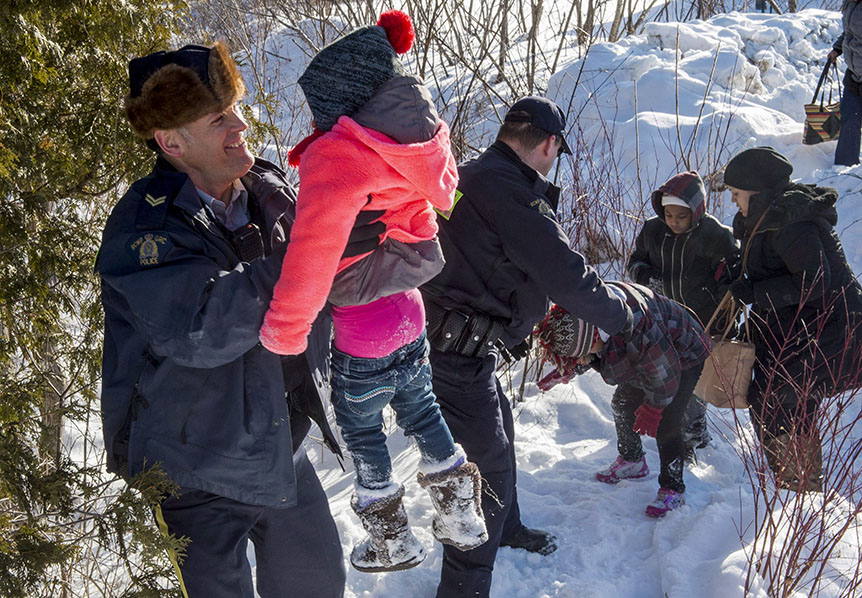 The story goes like this: As a taxi full of people approached the Canadian border near Hemmingford, Quebec on Friday from the U.S. side, American border guards moved to intercept it. That’s when the doors of the car opened and eight people – four adults and four children – got out and ran to Canada.

That’s one story of the photograph, anyway. But there is another.

About two and a half hours down the road, in Ottawa, the talk in the prior days was all about who belongs and who might not, and about how we ought to treat each other.

A relatively innocuous motion recommending a parliamentary committee be struck to study Islamophobia – that is, acts of a divisive nature – had itself become incredibly divisive, as accusations floated around about limitations being placed on various freedoms guaranteed by our Charter, or about whose fault it was that division exists in the first place.

And these two events would not be related necessarily were it not for the fact that a few weeks ago Donald Trump had singled out seven predominantly Muslim nations from which the United States might yet still, pending a rewrite of the law, ban arrivals. Included in that list of countries is Sudan, where the eight people who arrived in Hemmingford Friday told a Reuters reporter they are originally from.

Since the Trump campaign began only a few short months after our own election in late 2015 that was fought, in part, over our willingness to give into fear of the Other, Canadians have looked south and wondered a lot about how different we really are from our neighbours. Essays and think pieces have been written to support both sides of this conundrum: we are very, very different, say some; we are not that different at all, say others.

This existential quandary is hardly new. We have long been torn about what kind of a country we live in, and therefore by extension, what kind of people we are.

In 1972, June Callwood, the then-head of the Canadian Civil Liberties Association wrote in this magazine that, since the War Measures Act had been introduced two years prior in Quebec, she had been “trying to adjust myself to the realization that what I believed all my life about Canada – a land somehow more noble than any other, more tolerant, brave, and even true, whatever true means – never existed at all except in my head, where its sole function was to enlarge my vision of me, the typical Canadian, noble, tolerant, brave and, especially, true.”

Disabused of that vision, and looking back through history on the abuses wrought within these borders, Callwood decided instead that, “Canadians are a nasty lot.”

Indeed, Canada’s current welcome mat is not as clean as we might think. In recent years, we have learned more about how Canada often treats undocumented migrants once they have been detained. Immigration detainees are often held in correctional facilities with criminals, for instance. The deaths of three immigration detainees in the spring of 2016 prompted the public safety minister to order a review of the system.

More pressingly, in the days since Trump’s travel ban was ham-fistedly, and briefly, implemented, there have been calls for Canada to end its participation in the Safe Third Country agreement, under which Canada returns asylum seekers who enter at ports of entry from the United States back to the United States. This is why folks are walking across the border at random spots, away from formal crossing points. At the very least, suspending the agreement would mean those seeking asylum in Canada might not have to risk frozen limbs or death to attain it.

But despite these persistent issues that must be addressed, in general we continue to tell ourselves that, well, at least we are not the United States. Otherwise, why would people like the eight who ran through the snow Friday want to come here?

For as long as the two nations have existed in some form beside one another, Canadians have considered the United States in this comparative manner – as a measuring stick against which we gauge ourselves. The U.S. is an elephant to our mouse; a Goliath to our David, and so forth. We note those differences and think they are what must define us. But it seems our perception is wrong. Rather than a sibling or even a neighbour, the U.S. is our mirror. When we have looked there, we have only ever been seeing ourselves reflected.

As Chiasson’s photograph went viral online Friday afternoon, there were some who fretted about larger implications if these eight people, should their claims for refugee status stand, be allowed into the country. That is, could Canada become too welcoming? But mostly people just looked at the face of the RCMP officer with the young child in his hands, perhaps interpreting his expression simply as that of a man relieved to complete a job he’d been sent to do: ensuring nobody making a dangerous crossing that day died in the process.

Beyond that moment, of course, the system – problematic as it is – will have taken over. These new eight asylum seekers were transported to a local police station, as per protocol. At the moment, we don’t know what will happen to them, or where they will be as they await determination of their status. Perhaps they will become Canadians; perhaps not. While the rest of us wait to learn of their fates, we will continue to wonder whether we are still accepting of others or not, and who might belong and who might not.

With any luck, we will conclude that when we look at that RCMP officer holding that child, we want to see two Canadians, not just one.