What is Thomas Mulcair thinking? (surely it's not 'comeback')

David Moscrop: His defeat wasn’t merely a punishment for losing—it was a rejection of his politics—and it's time for Mulcair to let his successor lead 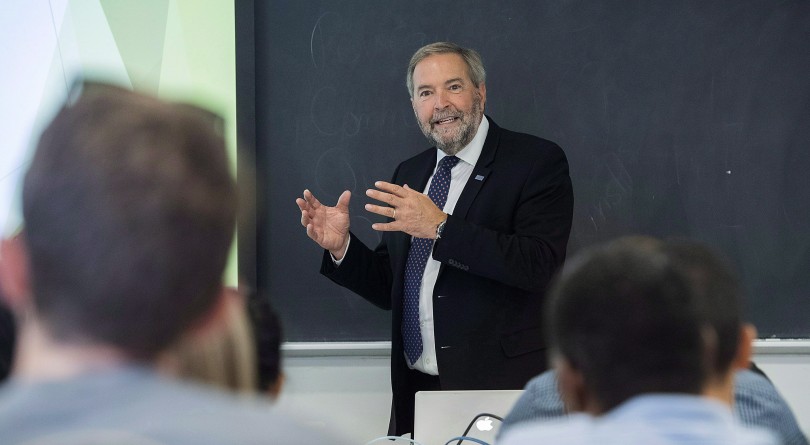 Mulcair teaching a class in September at the University of Montreal. (Graham Hughes/CP)

During the past few weeks, Thomas Mulcair, formerly the leader of the federal New Democratic Party, currently a political pundit on television, has been up to something that, if not unprecedented in Canadian politics, is certainly unusual. As a commentator, he has suggested that his successor, Jagmeet Singh, may not be long for the political world if he fails to win the ongoing byelection in Burnaby South in which he is seeking a seat, and that he knows of “several” of the party’s MPs who are not planning on running again. He has also claimed that disaffected environmental progressives might abandon the orange side to support the Green Party.

The defence of Mulcair’s turn from politician to commentator is that he’s an expert: he’s lived what he’s discussing and now he’s offering his experience as insight. More to the point, he isn’t saying anything that’s indefensible or implausible. He’s just doing the job (a job he didn’t have to take) for which he’s paid. That may be true. Still, the commentary itself violates the boundaries of decorum implied and adopted by those who serve or have served as a leader that limit hostile incursions into party territory post-tenure—which is to say, it’s bad form to trash your side from the bleachers after coaching the team.

RELATED: While Liberals and Conservatives battle, the NDP eats itself

In 2016, Mulclair was ousted as NDP leader in a stunning defeat at the party convention in Alberta. Not long before, he had led his side to its second-best showing (by seat count) in electoral history. But that was after a contest in which the party squandered its best chance to date to form a federal government. Such wounds heal slowly, unevenly, if at all. Anyone would be deeply hurt by this and plainly Mulcair was. But his defeat wasn’t merely punishment for losing an election. It was a rejection of his politics, a safe and at times uninspired centrism that riled many party faithful and raised the question of the state and future of social democratic politics in Canada.

In some sense, it’s appropriate to have Mulcair take part in a discussion about the way forward for the left in Canada since his vision of it is distinct from others, a building out of the path set by the late Jack Layton: pragmatic, cautious, nonetheless left, but far from revolutionary. But an acerbic public discussion, on television, with him as a pundit isn’t constructive and leaves—what is it?—a bitter taste in the mouth. It’s also wildly distracting since it encourages stories about intrigue and drama (this column included) rather than a good-faith exchange of ideas meant to help build up the party. No one quotes Marx or Luxemburg during a brawl. And Mulcair’s commentary is less fodder for discussion than it is a left hook thrown in an intra-familial donnybrook.

RELATED: This week in ‘What will Tom Mulcair say next?’

Amidst the scuffle, there is speculation that Mulcair envisions the road to political return running through the commentariat. There are whispers of a comeback—as a New Democrat? As a Green? All rumours. Nothing close to substantiated. But a second coming wouldn’t be a first in Canadian politics, and memories of Pierre Trudeau’s unexpected do-over and Joe Clark’s second tenure as Progressive Conservative leader come easily to mind. There is even some questioning, as the Georgia Straight reports, of how Mulcair’s defeat was orchestrated and whether it was legitimate—which seems a tad a paranoid—a committee to bring him back (which was briefly the talk of the town in 2017), and a small-following Twitter account that is still active.

The NDP has a new leader and that leader ought to have a chance to chart his vision—as poorly as that has gone to date—as he sees it. Also, Mulcair’s public commentary sets a regrettable precedent. The last thing Canadian politics needs is a miscellany of former leaders running their parties from the grave on television and radio. It would be far better for Mulcair and others to follow the model of former American presidents—and note the extraordinary source of this wisdom, one that offers few such revelations—and devote their post-tenure to rising above the political squabbles of the day, refraining from fighting yesterday’s battles and over and over again, and offering private guidance and advice when necessary. That would be preferable to watching a performance of Norma-Desmond-as-a-former-opposition-party leader—and far more constructive.