What kind of force for global peace does the NDP want Canada to be?

The NDP sees itself as a party built on international justice and human rights. So on the war against Islamic State, why isn't it standing up for its values? 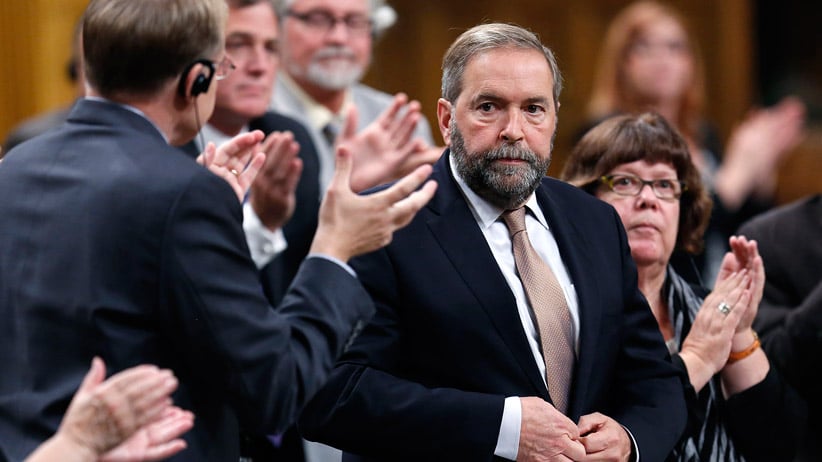 In an interview with Maclean’s earlier this month, NDP Leader Thomas Mulcair was asked if the Islamic State jihadist group can be defeated without firing a shot or dropping a bomb.

Mulcair didn’t directly answer the question. Instead, he voiced the ahistorical and myopic falsehood that everything horrible befalling Iraq and Syria stems from the U.S.-led invasion of Iraq 12 years ago. Then he repeated a variation of something he’s said before: “This is not Canada’s fight.”

There are good reasons not to support Canada’s combat mission against Islamic State in Iraq and Syria. It’s generally unwise to get involved in a war you’re not committed to winning. Victory against Islamic State depends on the United States. And U.S. President Barack Obama appears content to merely contain Islamic State, then hand the problem over to his successor in 18 months.

Another major problem is the absence of a coherent strategy for dealing with Syrian dictator Bashar al-Assad, whose butcher’s bill far exceeds that of Islamic State.

Four years ago, Obama said it was time for Assad to step aside. Since then, Assad’s regime has killed tens of thousands, driven millions into exile, and launched poison gas attacks on Syrian civilians. The latter atrocity crossed a “red line” Obama had defined, and it briefly appeared as though Assad might be punished for it. He wasn’t. The Russians brokered a deal for Assad to give up his chemical weapons stocks. The Wall Street Journal  now reports that U.S. intelligence agencies have concluded Syria didn’t relinquish all its chemical weapons. Assad won’t face consequences for that, either.

His regime survives because of Iran. Tehran spends billions of dollars there, and has deployed advisers and fighters from its Revolutionary Guard, and from its Lebanese proxy militia, Hezbollah.

Related: Why the international community isn’t holding Assad to account

The United States has just negotiated a nuclear with Iran, and is now strangely uninterested in the departure of Iran’s Syrian client. Syria’s non-jihadist rebels, understandably, see a connection and feel betrayed—something that will further complicate any Western efforts to help shape a post-Assad future for Syria. If we’re going to defeat Islamic State, we also need to plan for what should happen next.

But Mulcair’s response was more visceral: This doesn’t concern us.

If Mulcair led a party of conservative isolationists, his stance at least wouldn’t stink of hypocrisy. But the NDP’s own constitution says its goal is to “build a more just, equal, and sustainable Canada within a global community dedicated to the same goals.”

Mulcair himself has written: “As Canadians, we don’t want our country sitting on the international sidelines—unwilling to help, and marginalized by Stephen Harper and the Conservatives’ one-sided approach . . .I believe Canada can be a positive force for peace, justice and respect for human rights around the world.”

What kind of force for international peace, justice and human rights does the NDP want Canada to be?

There are instances in which that force can be non-violent, where generous foreign aid and persuasive diplomacy can pay dividends—countries where girls can’t study because they are poor; where homosexuals are discriminated against but can benefit from legal aid; where clashing religious groups might be encouraged to reconcile.

Then there is Islamic State’s self-described “caliphate.” Girls and women are systematically gang-raped; slavery is celebrated and widely practised; homosexuals are thrown off buildings or stoned to death; and religious minorities are exterminated.

Mulcair disagrees. “[I]t’s not more bombs into that horrible situation in those countries that’s going to get us closer to peace,” he said in the Maclean’s interview. But it hardly matters what Mulcair thinks might work instead, because he added: “This is not our fight.”

Islamic State is an explicitly fascist organization. It opposes everything for which the NDP says it stands. Its caliphate is the grim antithesis of the just and equal Canada and global community of the NDP’s constitution. The fight against it is the NDP’s fight—or it would be, if the party lived up to its declared values.

A couple of years back, the NDP went through some internal consternation over a vote to adopt a new preamble to its constitution that removes references to “democratic socialism” as the governing philosophy of the party.

But socialism—the best versions of it, anyway—is about solidarity with the oppressed. It means telling the weak and victimized, wherever they are, that your fight is, in fact, our fight. The NDP’s problem isn’t that it is socialist. It’s that it has forgotten what socialism should be.