The weak and uninspiring case against the niqab 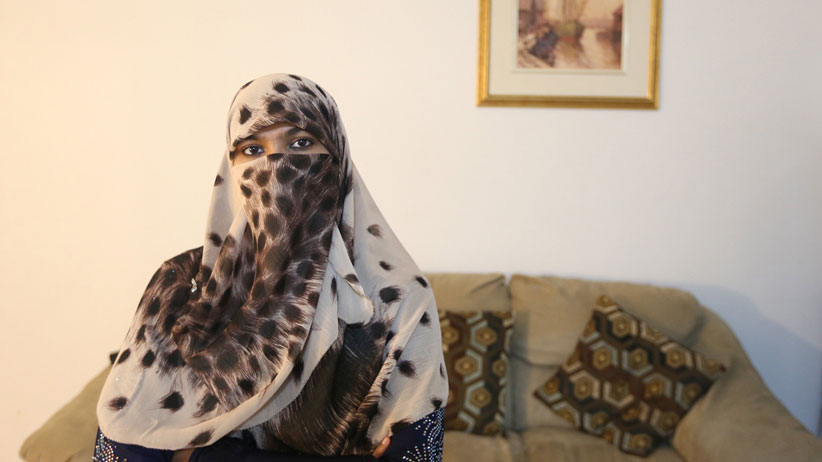 Less than 48 hours after a speech from the Liberal leader re-energized outstanding questions about religious freedom, national citizenship and women’s rights, the Conservative side sent up two backbenchers to convey objections. Objections not quite to any of that, but to Justin Trudeau’s understanding of analogy.

But as Conservative MP Mark Adler stood just before question period and conveyed one complaint about the use of “Nazi-era comparisons,” NDP Leader Tom Mulcair, seated across the aisle, pointed in the general direction of Public Safety Minister Steven Blaney. It was Blaney, of course, who just a day earlier had invoked the Holocaust to explain his anti-terror bill’s new limit on expression.

The applicability of the Nazi-era reference might thus be in the eye of the beholder; one man’s suitable reference to the era of Hitler is another man’s outrageously proportioned comparison.

But any debate about the appropriate use of historical analogy is little more than a sideshow; except perhaps as a segue to a discussion about who here is being more divisive, even if that’s not quite what is at issue. Tone and manners matter and how a politician comports himself is worth consideration and how both Justin Trudeau and the Conservatives respectively got to this point could be justifiably studied, but style is still secondary to substance. Even when what we are talking about is an article of clothing.

At issue here is the niqab. Along with it comes everything that is and has been loaded onto that garment—the ban that was invoked at citizenship ceremonies three years ago, the Federal Court ruling that struck down that ban, the government’s decision to appeal and Trudeau’s decision to place the niqab at the centre of a strident and accusatory speech.

But for all else that might be said about this week and this moment, there is this: the case for banning the niqab from citizenship ceremonies is weak and uninspiring.

“Mr. Speaker, the Prime Minister made more alarming statements yesterday on the rights and freedoms of Canadians,” Trudeau said yesterday when it was his turn. “Can he please explain to Canada’s half a million Muslim women why he said their chosen faith is anti-women?”

The Prime Minister attempted to parse himself.

Fair enough. Harper’s comments of Monday did not really criticize the entire Muslim faith. Trudeau was embellishing in his retelling.

Of the wearing of the niqab by a new citizen during the swearing of the official oath, the Prime Minister said this: “Why would Canadians, contrary to our own values, embrace a practice at that time that is not transparent, that is not open, and frankly is rooted in a culture that is anti-women?”

Harper might’ve taken the Liberal leader’s question as an opportunity to explain more closely what he meant by a “culture that is anti-women,” but instead he proceeded to repeat the complaints his backbenchers had aired just moments earlier about Trudeau’s choice of analogy.

If the Prime Minister is interested in a discussion of women’s rightful attire, the Internet would be happy to have it with him. Beyond the hashtag, there are various questions. On what basis can the niqab be said to be anti-women? Is the niqab somehow different in this regard from other religiously inspired forms of dress? A small survey of niqab-wearing Canadian women that was published in 2013 suggested various personal reasons for the choice. Is it not possible for a woman to wear a niqab without somehow submitting to oppression or some kind of anti-women sentiment?

With his second intervention, Justin Trudeau pushed further and deeper.

“Mr. Speaker, the Prime Minister also said yesterday that religious freedoms should be overruled because almost all Canadians do not support the wearing of a niqab,” the Liberal leader said, venturing that Harper had been in charge of Reform party policy when the party voted against allowing RCMP officers to wear turbans. “Twenty-five years later, why does the Prime Minister still insist that the majority should dictate the religious rights of minorities?”

Rather than quibble with the Liberal leader’s version of his position, Harper seemed to endorse it, quoting first from two Muslim organizations that support the government’s position on the niqab.

Actually, it is probably still for the Prime Minister to explain why popular sentiment should decide the legitimacy of a claim to religious freedom.

That we would put such things to a vote seems a problematic idea, but popular support might at least be more tangible than anything else the government can claim in this dispute.

It would still seem to be the case that the government’s lawyers tried to tell a Federal Court judge that the ban on the niqab during the oath was not quite a ban, but rather that “citizenship judges are free not to apply it”—Paul Daly, a professor at the University of Montreal, has written an interesting legal analysis of this point.

That would seem to wobble any claim to an absolute principle. But even if that is put aside, what sort of necessity or principle is being claimed here?

As a practical matter, there would seem to be other options for either confirming someone’s identity (by asking a woman to unveil in private) or ensuring she has said the oath (by positioning a niqab-wearing woman within earshot of a citizenship judge). To expand on a hypothetical raised by Justice Boswell in his ruling, the government would seem to make special allowances for deaf-mute applicants, including the hiring of an interpreter.

Oh, but if we allow a woman to swear the oath while wearing a niqab, then what about some fellow from the KKK who might insist on wearing his white hood while he pledges allegiance? Well, it would at least be fun to see a Klansman try to claim religious freedom. Emmett Macfarlane has taken a useful run at this analogy, and I’ll thank him for also pointing me in the direction of the Supreme Court ruling in the case of Syndicat Northcrest v. Amselem. Anyone who insists on the Klansman comparison should at least have to explain how said Klansman could meet the standards set out there for a claim of religious belief.

On the topic of religious freedom and the law, Alberta v. Hutterian Brethren of Wilson Colony has also been invoked as evidence that “religious freedom is not absolute.” Fair enough. But that ruling also notes the presence of a “pressing and substantial goal.” What precisely would the pressing and substantial goal here be? (I’m similarly thankful to Emmett for pointing me to that ruling.)

(I suspect the Supreme Court’s ruling on testifying in court while wearing a niqab might also be of relevance.)

In his interview with Maclean’s this week, Jason Kenney, the minister who directed the ban on the niqab, asserted the principle “that a public citizenship ceremony has to be performed publicly.” “Publicly” in this case would seem to be defined not simply as existing in public, but having to show one’s nose and mouth in public. (Fun question for your next dinner party: Is a woman in a niqab behaving publicly when she walks down the street?) The regulations for citizenship ceremonies do allow for a private swearing of oath in certain situations, “such as terminally ill candidates unable to travel or other urgent or extenuating circumstances,” I’m told by a government official. But regardless, we are being asked to put a philosophical or symbolic standard at the forefront.

If identity can otherwise be confirmed and the reciting of the oath can be otherwise heard, the value of unveiling during the communal recitation of the oath is entirely symbolic. And while there is something to be said for symbolism in the life of a nation, it is problematic, as with public opinion, to put that ahead of a claim to religious freedom.

It is on other symbolic grounds that the niqab is otherwise objected to: that it is a symbol of oppression, perhaps even wrong-headedly adopted. You are surely free to make that argument, but you are turning your own argument on its head if you then suggest that society should dictate a woman’s attire without a pressing reason for doing so.

That’s “not the way we do things here“? What does that even mean? We don’t make allowances for religious freedom? We don’t tolerate almost all choices of personal dress or undress? We reserve the right to readily impose our understanding of equality on a woman’s discretion? We set aside religious freedom for symbolic reasons?

It most certainly is the way we do things here insofar as we allow women, seemingly with some exceptions made for the purposes of confirming identity, to go about their time in this country wearing a niqab if they so desire.

If there are no practical or procedural grounds to justify demanding the niqab be lifted during the saying of the oath then a ban might be doomed in law. But even if it is entirely down to symbolic meaning and even if a desire for symbolic value shouldn’t be sufficient to limit religious freedom, we might still debate the symbolism.

If we are to officially accept the wearing of the niqab during the oath, as we seem to have done before Kenney decided we shouldn’t, what might that symbolize? We could say it symbolizes some public concession to oppression or segregation.

“To segregate one group of Canadians or allow them to hide their faces, to hide their identity from us precisely when they are joining our community is contrary to Canada’s proud commitment to openness and to social cohesion,” Kenney said three years ago. But in this case that openness and cohesion would impose a limit on religious freedom, and a seemingly unnecessary one at that.

We could then say that allowing the niqab at the moment of the oath demonstrates tolerance and freedom—a willingness to accept that in this country you are basically free to dress and express yourself as you see fit so long as it does not threaten the general good or inherent rights of others.

“Freedom in a broad sense embraces both the absence of coercion and constraint, and the right to manifest beliefs and practices,” Justice Brian Dickson once wrote. “Freedom means that, subject to such limitations as are necessary to protect public safety, order, health, or morals or the fundamental rights and freedoms of others, no one is to be forced to act in a way contrary to his beliefs or his conscience.”

We could say that the wearing of the niqab when an individual chooses to become a citizen of Canada does not threaten the safety, order, health or morals of this country. That so long as those things are maintained, we should make some attempt to accommodate each other. That we are secure enough to accept that some might choose to wear it. That we are stronger not for demanding the niqab’s removal, but for accepting that we must allow someone the choice to wear it.

There might be some rhetorically useful historical analogy to attempt here, but my knowledge of history isn’t what it should be and I’ve learned by watching politicians that the odds of sticking the landing on an analogy are low. In lieu of history, we might make do with practicalities, legalities and principles.