Saskatchewan’s outgoing premier gave his province a touch of swagger. Can it be the same without him? 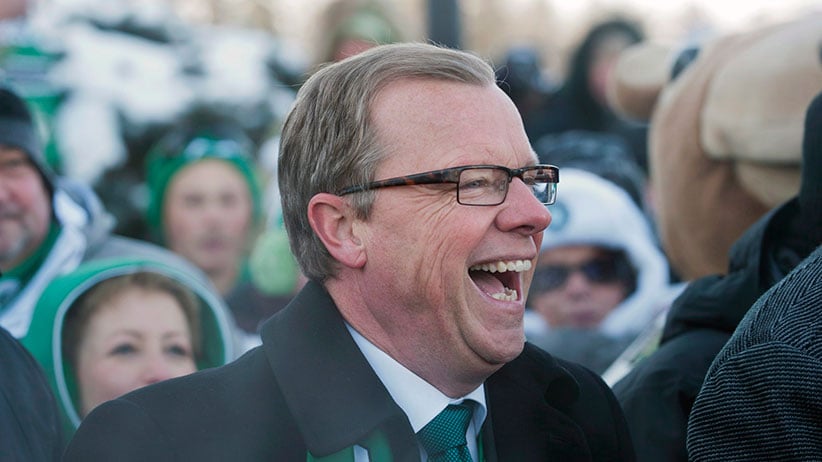 He’s led Saskatchewan for a (mostly) booming decade, and like the small-town, silver-tongued economic development ofﬁcial from Speedy Creek (a.k.a. Swift Current, Sask.) that he used to be, Wall always had an indicator or homily to drive home that message—median income up 37 per cent over his decade in power; a population closing in on 1.2 million after long stagnating at the million mark; parents no longer buying their kids luggage as a high-school graduation gift.

READ: After Brad Wall: What comes next for Saskatchewan

This sometimes ﬁerce rhetoric gave Saskatchewan an outsized voice in the national conversation, and brought the province something seldom associated with it: swagger. On Jan. 27, he will stroll away from all that, while the conservative Saskatchewan Party ﬁgures out who gets to try doing the impossible. “Nobody’s going to ﬁll his shoes. Nobody’s going to replace Brad Wall,” says Ken Cheveldayoff, one of the candidates vying to do just that. “But somebody has to take the torch from him and carry it and make it shine bright again.”

The race to the next Saskatchewan premier has been a tepid affair—Wall’s party had 9,500 members when he announced his resignation in August, and not even the most Wallian optimists inside the party expect a dramatic surge in interest for January’s vote. Variations of the word “continue” keep emerging in debates and remarks among the four provincial cabinet ministers and one senior bureaucrat in the contest—some tweaks, perhaps, some renewal, but no dramatic shift. Months in, no heir apparent has emerged. The group of contenders seems less likely to yield a Saskatchewan political giant like Wall, Allan Blakeney or Tommy Douglas than an unheralded ﬁgure like Woodrow Lloyd.

Don’t feel bad if you had to look him up. Lloyd took over from Douglas, the socialist titan and ﬁve-term premier who fathered medicare. Lloyd’s government was defeated in the following election. Potential peril for Wall’s successor owes not only to a charisma shortage but the challenges left behind for the next premier—Wall’s popularity descended back to earth this year after price dives in the three commodities that deﬁned his province’s boom (oil, potash and uranium), while his deﬁcit-ﬁghting budget featured an off-putting mix of tax hikes and spending cuts. “It doesn’t take a lot for people to feel like government isn’t listening,” cautions June Draude, one of Wall’s former cabinet ministers.

The next premier also inherits the stench of a questionable Regina land deal involving Wall’s former chief of staff and a former top minister—a ﬁle now under investigation by the RCMP. Wall had briefly turned Saskatchewan into a one-party state, winning ﬁve times more seats than the opposition over the past two elections, but polls this year have repeatedly shown a much tighter race between the Saskatchewan Party and the NDP, which selects a new leader of its own in March. Wall’s party lost two urban seats to the NDP in 2017 by-elections, and while areas outside Saskatoon and Regina remain conservative strongholds, the next premier risks getting wiped out in the big cities in the 2020 general election, says Jim Farney, a political scientist at the University of Regina.

Wall will be remembered for his oratory, optimism and changing how Saskatchewanians think about their province, but given the struggles of his would-be successors to inspire and connect with the public, says Farney, “it might be a short legacy.”

READ: What the end of NAFTA could mean for jobs in western Canada

Another future issue on the other side of the Wall has gotten less notice: while Indigenous people accounted for nearly a quarter of that population growth in the past decade, his government has made fewer strides toward reconciliation than other Western provinces. And the party’s white rural base won’t propel it as a leadership ballot issue.

It’s not known publicly what Wall, 52, will do in political retirement. Corporate boards will surely covet a business-friendly ex-premier, and he’s long dreamed of being an ambassador. This much is clear: when Brad Wall steps down, the stature of his party and province will descend as well.

Correction: An earlier version of this article said a land deal under police investigation was in Saskatoon. It was in Regina.