What the U.S. right doesn’t want to hear

'What if Washington died a piteous rebel's death?' is a question not asked often enough by Americans 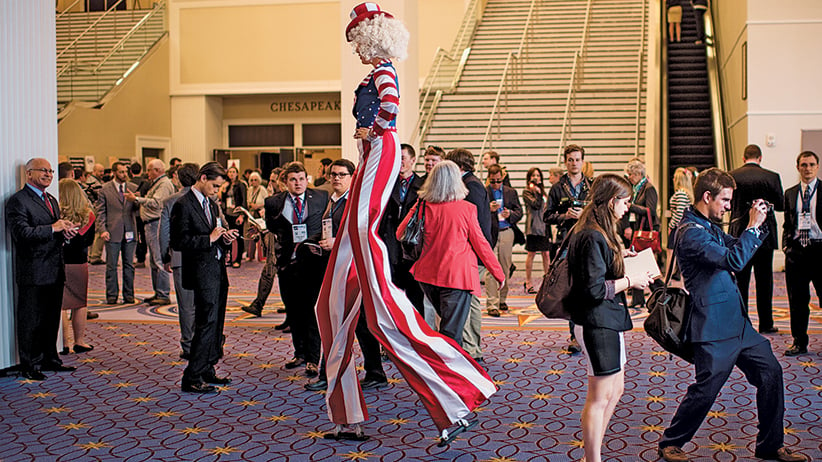 The Conservative Political Action Conference took place in Washington last week. CPAC is probably the 21st century’s closest analogue to the “be-ins” and “happenings” of the ’60s. It’s a big Rabelaisian festival of comic rituals, freakiness, weird art, duelling wits and far-out democracy in the wild. The party just happens to have a politically “conservative” theme, and even that doesn’t set it apart from the hippies all that much. Ayn Rand called libertarians “hippies of the right,” and if you visit CPAC, you’ll definitely find some.

One of the highlights of this year’s CPAC involved Dinesh D’Souza, the social-conservative crank who recently branched out into filmmaking with the lucrative 2016: Obama’s America. The documentary, which D’Souza co-directed, combines a biography of President Barack Obama with a vision of the ravaged near-future America resulting from the chief magistrate’s deep-rooted, cunningly concealed anti-American leftism. A good alternative title might have been The Brain that Ate the U.S.A.

Now D’Souza has a trailer for a new movie “that is for all Americans, [though] we know that it will especially resonate with our conservative friends.” The trailer opens with time running backward. We scroll past Ronnie Reagan, the moon landing, Martin Luther King and Jackie Robinson. The latter pair, of course, represents the Americans’ unshakable notion that their handling of domestic racial hostility has been an inspiring gift to the wider world.

Eventually, we end up on a battlefield whereupon George Washington is leading a massed infantry charge, which makes you wonder exactly what battle we are looking at. The real Washington knew better than to expose his precious vitals to lead, but in this timeline, we see him mortally wounded, and the camera cuts to the Statue of Liberty, Mount Rushmore and other monuments being blown away by an ominous wind. Voiceover: “What would the world look like if America . . . did not exist?”

The trailer indicates that this pregnant what-if premise is likely to be wasted on a tiresome polemic full of bald eagles and Old Glory—presumably, an anti-Obama polemic, destined to be a forgotten curio within months. It seems like a large, revealing hint that reports on the project mention several producers but no screenwriters. So there is no sense expecting an intelligent answer to the question, “How would history have been different if George Washington had died a piteous rebel’s death?”

Which is too bad, because Americans don’t ask this enough. It is as if they did not still live next door to the successor state of British America, largely founded by conscious dissenters from their slaveholders’ revolution.

Washington’s importance to the American cause is something his comrades were firmly agreed upon. But his essential contribution was moral rather than political, in the narrow meaning of the word. It certainly wasn’t military. Most grown-up Americans are at least dimly aware that French gold and German drillmasters were more important to the revolution than American generalship. When the U.S. government became hysterical about subtle Soviet massaging of American institutions during the Cold War, it was tacitly acknowledging that what foreign meddlers could make, other foreign meddlers might unmake.

Washington was a man who, above all, compelled respect with his person. The unity of the colonies—the ones that joined the Union in the first place, that is—is attributable to his even-handed, serene spirit, his ability to overawe both quarrelsome southerners and pious New Englanders. Only in that sense, although it is an important one, did he win the war. “What if George Washington had been five foot four?” is as interesting a question as, “What if he had been killed?”

American popular culture, even as it waves the flag, usually acknowledges that a timely change of government in London, or merely a slightly earlier shift of spirit, might have reconciled the colonies to the mother country and led to a home-rule arrangement. HBO’s John Adams miniseries, for example, was honest about how close the frightened colonial representatives were to suing for peace.

So what, then, is left of the fine ideals written down in the Declaration of Independence and the Bill of Rights? They are mostly solutions to policy arguments that European burghers had been making for hundreds of years in a belt of urban restiveness stretching from Sussex to Limburg to Geneva to Venice. The strong revision powers of the Supreme Court, which are perhaps the most permanent institutional influence of the American project on other governments, emerged only after the revolution—much against the will of Thomas Jefferson, who thought a U.S. president should have a pretty free hand as long as that president was he. But don’t tell the “conservatives”: It’ll only upset them.