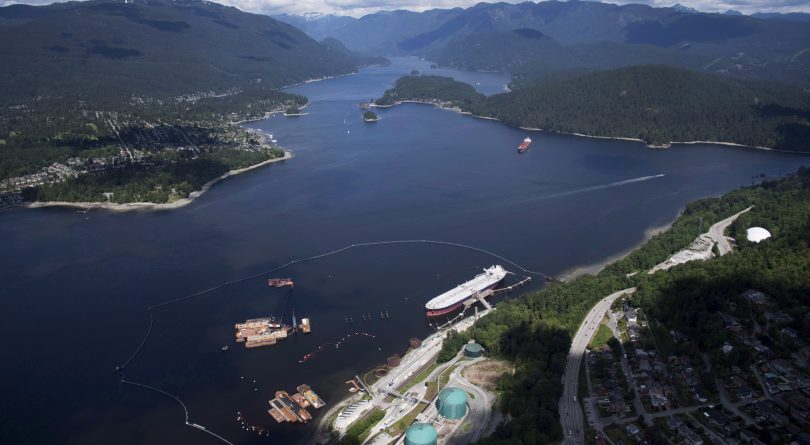 A aerial view of Kinder Morgan's Trans Mountain marine terminal, in Burnaby, B.C., is shown on Tuesday, May 29, 2018. (THE CANADIAN PRESS Jonathan Hayward)

When Ottawa took the Trans Mountain pipeline off Kinder Morgan’s hands for a cool $4.4 billion, most of us were only guessing at the value of that deal for taxpayers. The Parliamentary Budget Officer gave it the old college try in a new report, and found the feds paid either what the pipeline is worth—or, uh, overpaid by about a billion bucks. Trans Mountain’s final value will, of course, drop if its expansion faces further delays, per the PBO. [CBC News, PBO report]

Also in the oil patch: Canada’s top court ruled in a 5-2 decision that bankrupt energy companies have to pay for contamination cleanup before they settle debts with creditors. Decreed the majority: “Bankruptcy is not a licence to ignore rules.” [National Observer, Tweet]

If Ontario Premier Doug Ford has his way, says Opposition Leader Andrea Horwath, a new “Super Agency” will plot the privatization of the province’s health care system. The leaked draft version of the Health System Efficiency Act, reported by our friends at CityNews, outlines the alleged powers of what would become the province’s newest branch of bureaucracy—namely, to privatize more health services. The Toronto Star reports an official announcement is about a month away. [Maclean’s, Toronto Star]

“This story is about much more than a populist politician over-playing his hand. Rather, it’s a complex financial tale that exposed the limitations of a seemingly lucrative acquisition strategy, the unexpected vulnerabilities of conventional utilities, and the cross-border ripple effects of Donald Trump’s gigantic corporate tax cut.” [Maclean’s]

A pair of NDP MPs told CBC News Jagmeet Singh must step down if he loses the Burnaby by-election later this month. They’re part of a cadre of nine elected New Democrats who claim to have warned Singh last June that a loss would be the end of his time heading the party. Of course, not a single one would attach their name to the threat. It’s all so reminiscent of those “anonymous insiders” in Liberal ranks who plotted against their own party in the early Harper era. [CBC News]

Canada’s lengthening list of outspoken allies in a diplomatic spat with China grew by one yesterday, when NATO Secretary General Jens Stoltenberg said he was following the case “with concern,” and called on China to respond to Canadian calls for the release of detainees Michael Kovrig and Michael Spavor. A CBC News running tally of public support already included Australia, the EU, France, Germany, the United Kingdom, the U.S., the Netherlands, Latvia, Lithuania, Estonia and Spain. [Associated Press, CBC News]

Meanwhile, at a pretrial hearing in the breach-of-trust case against Vice-Admiral Mark Norman, the defence continues to demand documents of various senior federal officials, and claims the government search for records has been selective and haphazard. The Crown dismisses it all as a “very large fishing expedition.” [CBC News]

The Department of National Defence announced sexual assault charges against three members of the Armed Forces. Two were reservists serving in Nova Scotia, and the third was a Royal Military College cadet who faces three counts of sexual assault (and two counts of assault) related to alleged incidents between 2015 and 2017 in Ontario and Quebec. [Canadian Press, News release, Kingston Whig-Standard]

What is the Senate, really? The chamber of sober second thought’s comms shop posted a video online that quizzed Parliament Hill passersby on all and sundry questions about the big red room in the background. Shockingly, a few hapless tourists looked lost during the impromptu civics test. [Senate video]

The hipster vote: Always keen to shore up support in the Maritimes, the Liberals ponied up $55,000 for a P.E.I. company that helps artists pre-sell vinyl records, which have “seen a revival in recent years.” Nothing helps a trend like a cheque from the feds. [This is seriously a thing, CBC News]