What's in store for a post-Trump America? An Idaho town may have the answer.

Adnan R. Khan: Tens of millions of Americans are not about to give up on Donald Trump’s politics. Their support is rooted in a political current steeped in racism and inequality. 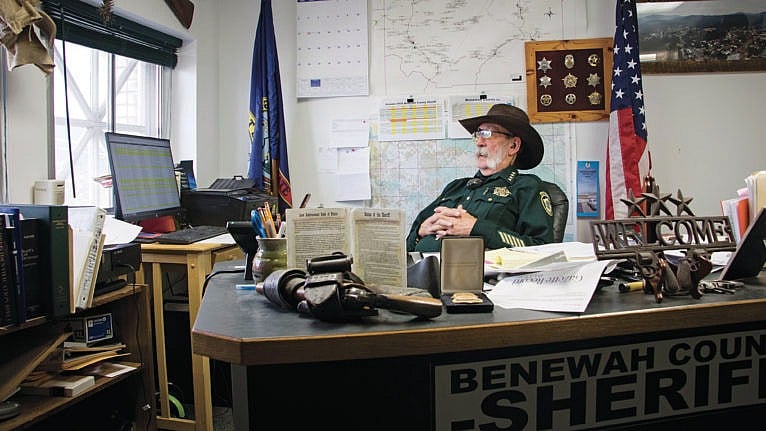 Resser, the Sheriff of Benewah County at his office in St. Maries, Idaho (Photograph by Adnan R. Khan)

Back at the end of October, during an interview at his office in downtown St. Maries, Dave Resser, the sheriff of Benewah County in northern Idaho, leaned back in his executive chair and declared: “The United States is not a democracy; it’s a republic.”

It was, plainly, an odd thing to say for a man who had come into his position through the exercise of democracy. Resser, who retired shortly after we spoke, had won election to the sheriff’s office twice. He was popular and, from the accounts of the people he served, populist in his approach to dispensing justice.

If you were a criminal caught in the commission of a crime, you might be arrested and prosecuted to the full extent of the law, or you might not, depending on the nature of the crime and how well you got on with the sheriff. Resser didn’t “pay much heed” to the diktats of “the higher-ups,” those central government officials in their distant Washington swamp, as he put it. He knew what was best for his community, and no one could tell him any different.

READ: Will nostalgia define the next four years in American politics?

What he meant by the U.S. not being a democracy was intimately tied to that world view. Out in St. Maries, Resser was the sheriff, in that swashbuckling, Wild West sense of the word. His office, decorated with antique six-shooters and shotguns, rusted sheriffs’ badges and cowboy spurs, screamed out for those simpler—or perhaps less cumbersome—times, when modern democratic principles like universal suffrage and minority rights were circumscribed by the flawed understanding that some citizens were just better equipped, by God and nature, to rule.

The results of the U.S. presidential election suggest that a hefty segment of the American electorate agrees with him. There were few surprises in those results, but the few there were augur dark days ahead for our dysfunctional neighbour. The pollsters were wrong on some key metrics: white voters did not abandon Trump, as pre-election polling suggested they might; in fact, results show they gravitated toward him in greater numbers than they did in 2016. Some Latino voters, too, shifted their votes to Trump, also defying the polls, and helping him increase his vote count to nearly 73 million from just under 63 million in 2016.

READ: Libertarians and anarchists for Trump

So 10 million more people voted for a man who in four years demonstrated that he was uniquely unqualified to be president of the United States, who presided over a botched response to a pandemic that has cost tens of thousands more lives than it should have. Tens of millions of people love him, and he loves to be loved.

The numbers also point to another fact few people want to acknowledge: Trumpism is no passing fad. Indeed, calling this phenomenon “Trumpism” is a misnomer. It makes it seem as if it is something novel, that it somehow magically appeared when Trump rode down that escalator in 2015 to announce his candidacy for president, and will just as magically disappear when he is dragged kicking and screaming out of the White House. Support for Trump is rooted in a much more fundamental, and historically pernicious, political current, one steeped in racism and inequality. And, ironically, even after the defeat of its latest champion at the polls, it is stronger than ever.

READ: American evangelicals still see Trump as their anointed one. Why?

In my travels through the rural Midwest reporting on the U.S. election for Maclean’s last September and October, this world view—one that denies racism exists but defends the socioeconomic structures that perpetuate it—was commonplace. It is deeply undemocratic, convinced that certain American citizens—urban, non-white, poor—pose an existential threat to America. Their logic goes something like this: people vote in their own interests. Poor people, who are mostly made up of immigrants and other people of colour, will vote for politicians who promise them what they need—good public education, free access to health care, better infrastructure for their neighbourhoods, etc. Those things cost money, which will have to be raised through taxes. Poor people don’t pay much tax—they’re poor (and lazy)—so it will be the middle class and the wealthy—mostly white people—who will have to foot the bill. This is wealth redistribution. This is socialism.

The argument has endured in a variety of forms since virtually the beginning of the American experiment, according to Heather Cox Richardson, a scholar of American history at Boston College. You hear it these days on right-wing media like Fox News and its constant drone of “Socialism!,” “Radicalism!” and “Anti-Americanism!”

Trump has taken that rhetoric to new heights, claiming hordes of radical socialists, mostly Black Americans, have undermined democracy and stolen the election from America’s rightful heirs, people like him who are uniquely equipped to run the country. His message has resonated with people like Resser, who believes Trump is the only thing standing between the America he knows and loves and socialist anarchy.

“Sure, the way he says things is sometimes wrong, but I feel like if we had someone who thinks like Trump but talks like [Mike] Pence, we’d have the perfect leader,” he says. “All Trump wants to do is protect the Constitution and individual liberty.”

This kind of constitutionalism is popular in northern Idaho, along with parts of Oregon and Montana. For years, the region has been a magnet for so-called “preppers” and “redoubters” who subscribe to a radical version of freedom in which government is the enemy and it is the duty of every American to be armed and ready to resist its tyranny.

In 2013, a group calling itself the Three Percenters, a far-right militia active in both the U.S. and Canada, named after their erroneous belief that only three per cent of American colonists rose up against British colonial rule, purchased land on a remote mountaintop just outside St. Maries and announced they would be setting up a prepper community called the Citadel, which would gather together 3,000 like-minded people, armed and ready to defend America.

Resser, who was sheriff when these people arrived in his county, told me he had no problem with them. “They’re patriots,” he said. “Some of them are still there up on the mountain, but as long as you don’t bother them, they won’t bother you.”

The question is, what constitutes a “bother” to a paranoid group stockpiling AR-15 assault rifles and dreaming of the day it gets to use them?

READ: The stark, unbridgeable divide between rural and urban America

Alicia Abbott, a Democratic party organizer in Sandpoint, Idaho, less than 100 km from the Canadian border, told me anything resembling support for Joe Biden and Kamala Harris is enough to trigger these people into violence. When we spoke by telephone at the end of October, Abbott was on her way to an undisclosed location in Oregon to ride out the election after one of her colleagues, another organizer for the Democratic party in Sandpoint, had an arrow shot at her front door.

“I’ve been receiving death threats for weeks now,” she told me. “But you know, it’s not so much the leaders of these prepper groups that worry me. It’s their followers. A lot of these guys are already mentally unstable. I mean, they live up in the mountains fantasizing about a civil war. Clearly they’re paranoid. And mental health is such an issue in America. If Trump loses, I can totally imagine some of these guys going off on a killing spree.”

Indeed, the dangers of that scenario playing out are increasing as Trump continued weeks after the election to accuse Democrats of massive voter fraud. Dozens of Trump supporters, in Idaho, Montana and Oregon, told me they were certain that the only way Biden could win the election is if he cheated. In the lead-up to the vote, gun shops were running out of weapons and ammunition, in part because of rumours floating around that Kamala Harris had said one of the first things she would do as vice-president would be to confiscate people’s guns.

It was entirely untrue, but that didn’t stop Resser from believing it. “It’s not so much Biden who worries me,” he said. “The real threat is Harris. She’s a radical leftist. And she’ll be the real power if Biden wins.”

Trump has now set the stage for one of the most unstable periods in American history. Few believe he will ever concede the election. At best, he will no longer contest the outcome; but he will continue to claim that the results are illegitimate, and continue to rile up his followers.

Fortunately, for the rest of the world, come Jan. 20, 2021, the nightmare of the Donald Trump presidency will come to an end. In the American system, foreign policy is largely the domain of the executive branch, and Joe Biden will, no doubt, diverge sharply from the pugnacious tone Trump set.

But for Americans, the new year brings with it renewed anxieties. Trump is laying the groundwork to lead his millions of adoring followers down a dark and dangerous path. Over the last four years, he tested the limits of his authoritarianism; 2021 may be the year it truly flourishes.

This article appears in print in the January 2021 issue of Maclean’s magazine with the headline, “Trump reloaded.” Subscribe to the monthly print magazine here.