Everything you need to know about the where, when and how of tonight’s (second) rumble in the Outaouais 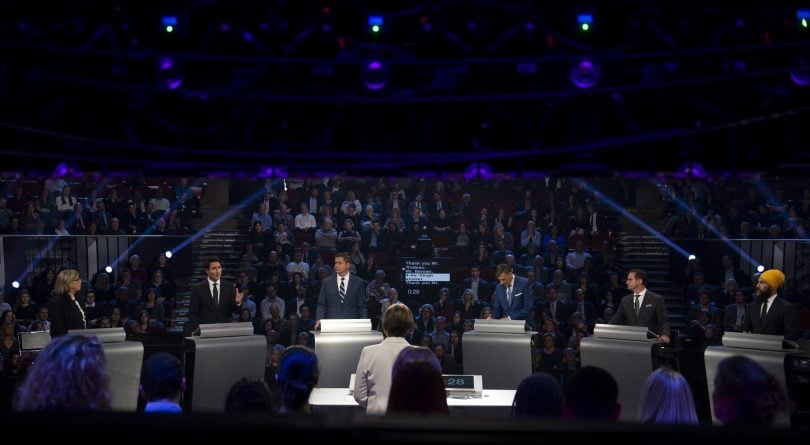 Trudeau speaks as May, Scheer, Bernier, Blanchet and Singh look on during the Federal Leaders Debate on Oct. 7, 2019 (Justin Tang/CP)

Each and every debater from Monday’s line-up will be back at their podiums for more: Liberal leader Justin Trudeau, Conservative leader Andrew Scheer, NDP leader Jagmeet Singh, Green Party leader Elizabeth May, Bloc Québécois leader Yves-François Blanchet and People’s Party of Canada leader Maxime Bernier are all scheduled to return tonight.

Like Monday, a group of multiple moderators rather than a solo host will guide the debate. Patrice Roy from Radio-Canada will lead the pack with participation from Alec Castonguay (head of the politics bureau at L’actualité), Patricia Cloudier (National Assembly reporter at Le Soleil), Hélène Buzzetti (parliamentary correspondent at Le Devoir) and François Cardinal (editor-in-chief of La Presse).

An almost entirely new list of topics to dispute, that’s what! On the French-language line-up tonight: Economy and finances; Environment and energy; Foreign policy and immigration; Identity, ethics and governance; and Services to citizens. A different format will begin with a question from a Canadian responded to by three leaders, then open debate from the remaining three, and concluding with quick succession questions from a journalist.

The French debate will start just a little bit fashionably later at 8pm in the same venue: the Canadian Museum of History in Gatineau, Quebec. If the monitors do their jobs, we should be done by 10pm.

French-speaking Canadians can turn their channels to ICI-Radio-Canada Télé, RDI, EPAC, OMNI, Groupe V Média or TV5. Streamers have many options, including Radio-Canada.ca, LaPresse.ca, Ladevoir.com, Lactualite.com and omnitv.ca—plus all the usual social media spots like Facebook, Twitter and YouTube. Retro radio people should turn their dials to ICI Radio-Canada Première.

And what if I don’t speak French?

Pas de problème! You can livestream the debate, translated into English, right here at macleans.ca. While the French-language debate won’t run on every single network during prime time like the first one, both CBC and CTV will air the event translated into English. You can also find English versions online at CBCnews.ca, CTVnews.ca and Globalnews.ca.