Where to watch tonight's leaders debate (and all your other questions, too)

Everything you need to know about the where, when and how of tonight's rumble in the Outaouais 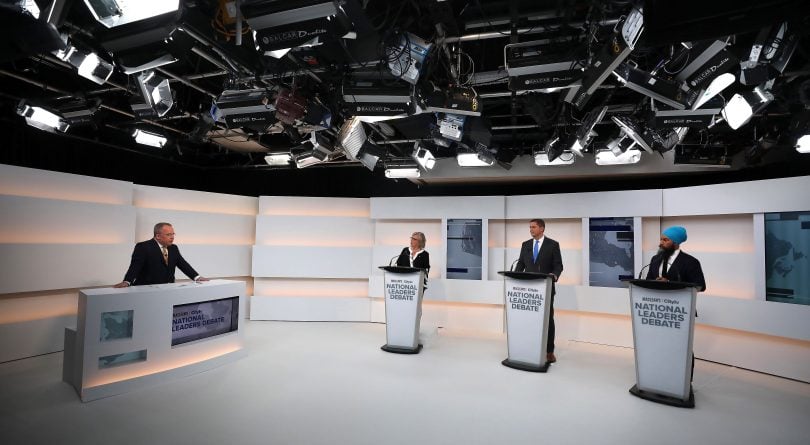 With two weeks exactly until the federal election, six federal party leaders will meet tonight in Gatineau, Quebec, for the English-language portion of the two-night debate. They’ll meet again on Thursday for another in French, but first, a cheat sheet of everything you need to know.

Official topics for the two-hour debate include affordability and economic insecurity; national and global leadership; Indigenous issues; polarization, human rights and immigration; and environment and energy. (Unofficially, anything goes.) Twenty-two minute segments will follow a four-part format: One question from a Canadian, another from a moderator, one question from one leader to another, then leader-to-leader debate.

The cameras roll at 7 p.m. ET at the Canadian Museum of History in Gatineau, Quebec, overlooking Parliament Hill across the Ottawa River, and in front of a live, non-partisan audience. The free tickets are long gone, but viewers have many options…

If you’re watching at home, many major networks will air the debate including CTV, CBC, Global, OMNI and CSPAN. Radio people can tune into CBC Radio one or Global News Radio Network. Online, the debate will stream on more than a dozen platforms including thestar.com, Huffingtonpost.ca, CNCnews.ca, Globalnews.ca, macleans.ca and Radio-Canada.ca—plus Facebook, Twitter and YouTube.

And what if I’m a keener?

Organizers at the Canadian Debate Production Partnership will happily help home viewers host their own viewing parties (submissions here). Free in-person livestream events can be found in various communities, like at McNally Robinson Booksellers in Saskatoon or at the Halifax Central Library. Or grab a bag of popcorn and catch the debate on the big screen in 24 Cineplex theatres across Canada.