Whither the Quebec Liberals? 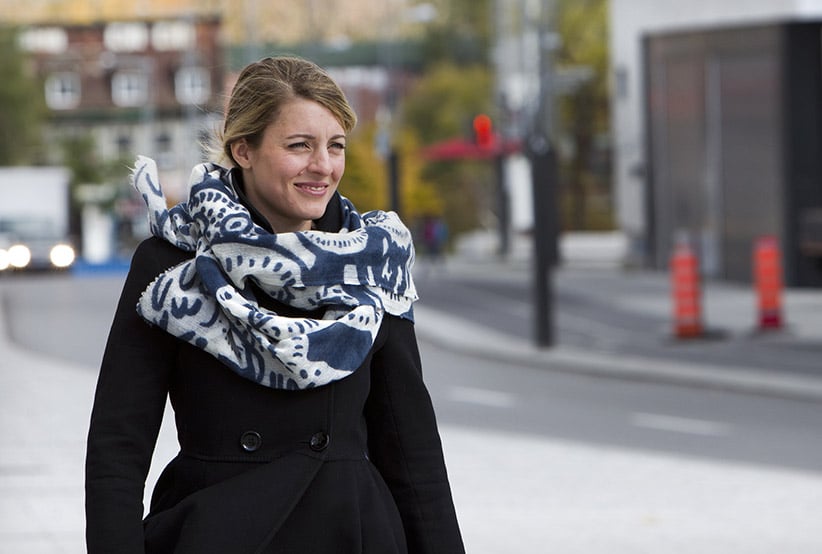 On paper and in the flesh, Mélanie Joly is the ideal political candidate for the Liberal Party of Canada. In 2013, the neophyte politician led her upstart municipal party to a surprising second place in the Montreal election. She has since written a book extolling the virtues of civic engagement, public transportation and open governments. In February, after months of speculation, she became a candidate in the Montreal-area riding of Ahuntsic. Liberal organizers were giddy at the thought of having Justin Trudeau and the equally telegenic Joly, 35, on campaign signs together. Trudeau tweeted a picture of himself and Joly shortly after she declared her intention to run. In it, Joly and Trudeau are seated at a table, ostensibly talking politics as Trudeau’s infant son dances in his father’s lap.

Yet what should have been an aligning of the stars for the Liberal party—a popular candidate, a multicultural voter base, a long-time Liberal bastion—has instead devolved into an internecine war between Joly and the five other candidates vying for the nomination. And in a time of faltering fortunes for Trudeau’s Liberals in Quebec and beyond, Ahuntsic is an example of how the party’s open nominations process, which forbids it from designating ridings for certain candidates like Joly, has led to a difficulty in attracting big names to the party.

Meanwhile, Trudeau’s decision to expel Liberal senators from the caucus has particularly hamstrung the Quebec wing of the party, which had long used the organizational muscle of its senators to bolster its modest footprint in the province. “There have been consequences [for the Quebec campaign] in thinking the party could live without senators,” a former Quebec MP who is still actively involved in the party tells Maclean’s. One consequence: the party has dropped 11 percentage points since September, according to poll aggregator Éric Grenier. Many Liberals have started to question the party’s fortunes in Quebec—a province crucial to its plans of unseating the governing Conservatives in the coming election.

Though Mélanie Joly is among the biggest gets for Trudeau’s Liberals, her popularity hasn’t necessarily translated into support in her chosen riding. Selling Liberal party membership cards is crucial for securing votes, and according to a source close to the Joly campaign, Joly is lagging significantly behind the other candidates. Joly flatly denied the claim—“Membership sales are going well,” she says—yet her opponents certainly have the advantage of time: Joly only entered the race in February, while other candidates have been selling cards for, in some cases, over a year.

Far from shrinking away from Joly’s formidable media presence, the other five candidates signed an open letter declaring their intention to remain in the race. “We wanted to be clear that we wanted an open and fair nomination, and that we’re not going to be intimidated into abandoning our campaign,” says Anthony Di Carlo, one of the five people running against Joly.

The party has yet to call a nomination date, which arguably favours the Joly campaign by allowing it more time to sell membership cards. Yet this also allows Maria Mourani, Ahuntsic’s popular incumbent now running under the NDP banner, to cement her own support. “It hurts to see [Mourani] fundraise when there’s no Liberal candidate to counter her message,” Di Carlo says.

The Liberal’s open nomination initiative, put in place by the party last year to ostensibly hinder favouritism, has cost the party at least two big names in Quebec. In November, public relations executive Jonathan Goldbloom lost the Liberal nomination in the Liberal stronghold of Mont-Royal to Anthony Housefather, a long-time municipal politician. Known for his political heritage and fundraising abilities, Goldbloom was a clear party favourite, but couldn’t match Housefather’s membership card sales.

Another high-profile candidate, Native women’s rights advocate Michèle Audette, also lost her riding to a long-time municipal politician. “It has created a problem for us,” the former MP says,regarding open nominations. “We have had good candidates who’ve faced some municipal councillor who has sold 800 membership cards, and they lose.”

Last fall, the Liberal party recruited Claude-Éric Gagné as chief Quebec organizer. A veteran of Quebec’s provincial Liberal government, Gagné was also a volunteer on Joly’s 2013 municipal campaign. Liberal party brass deny any favouritism for Joly. “We are not indifferent to the outcome. There are some ridings with candidates who are interesting, but it’s up to the members to choose,” Liberal spokesperson Olivier Duchesneau says.

The open nomination process is not the only thing haunting the Liberals in Quebec. In March, Liberal communications director Mylène Dupéré left the party after less than two years in the position. According to two Maclean’s sources, Dupéré was frustrated with being relegated to handling only Quebec-related issues, with the party’s Ontario-based braintrust monopolizing the larger tenets of the campaign. (In an email, Dupéré said she left the party for personal reasons.)

The party further faced internal dissent from the Quebec wing of the young Liberals over Trudeau’s support of Bill C-51. Many free speech advocates have decried the Conservative government’s anti-terror legislation as being an infringement on privacy rights. According to sources, much of the Quebec youth wing executive was furious that the party would support the bill, and demanded a meeting with Trudeau. Youth wing members instead had to settle for a meeting with the Liberal public safety critic, MP Wayne Easter—cold comfort, especially for a party suddenly forced into worry about its own electoral fate.