Who likes Chrystia Freeland? Most people.

Sept. 28: Canada's foreign minister may have rankled Donald Trump, but many are coming to her defence, impressed by her tough stance and intellect 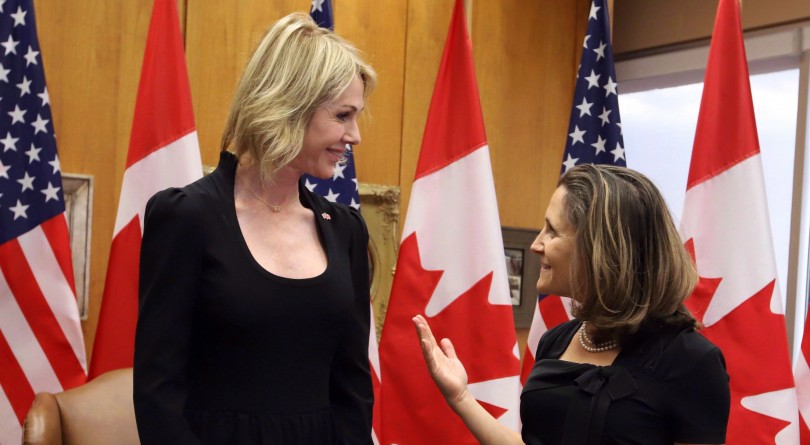 “We don’t like their representative very much.” That, of course, was Donald Trump’s swipe at Canada’s top trade negotiator Chrystia Freeland during a press conference Wednesday. Many have since come to her defence. The EU’s trade commissioner Cecilia Malmstrom called Freeland “a fantastic chief negotiator,” adding, “I think she is doing an excellent job under very tough conditions” while Trudeau said “the Americans are finding that the negotiations are tough because Canadians are tough negotiators. Even the U.S. ambassador to Canada, Kelly Craft, came to Freeland’s defence, saying she is among the smartest and most articulate women she knows. (CBC News, Global News)

But what if Trump has a point with Freeland? What if, as Andrew MacDougall asks, she hasn’t been helping Canada’s cause? Her Diplomat of the Year award speech in June, in Trump’s own backyard, seemed carefully crafted to get under his skin, with its warning that “neo-Nazis, white supremacists, incels, nativists or radical anti-globalists” are undermining democracies from within:

Of course Freeland knew her speech in Washington would rankle, just as she knew her appearance on a panel titled “Taking on the Tyrant” a few weeks ago would grate. But she did it anyway.

And now here we are, with NAFTA in limbo and an angry U.S. President. (Maclean’s)

As for Freeland herself, when chased down on a New York street, she wasn’t answering questions about Trump’s dig at her. (Twitter)

In Washington and around the world, viewers were glued to their screens Wednesday as the Senate Judiciary Committee heard riveting testimony from Christine Blasey Ford, who accused Supreme Court nominee Judge Brett Kavanaugh of attempted rape in the 1980s. Shannon Proudfoot examines the maddening similarities between Ford’s appearance, and that of Anita Hill nearly three decades ago when she accused Clarence Thomas of sexual harassment:

Separated by 27 years and a social landscape that has supposedly shifted on its moorings, the remarkable testimonies of Anita Hill and Christine Blasey Ford share striking, inescapable parallels. These echoes speak not just of a society that hasn’t changed nearly as much as it claims—nearly as much as seemed inevitable—between Clarence Thomas and Brett Kavanaugh, but also to the contortions of women walking an impossible knife’s edge.

You must be polished enough to seem credible, but don’t ever look uppity. You should be emotive so as to elicit sympathy and be believed, but never shade into hysteria. You must have an answer for everything, except when that seems a little too perfect to be trusted. You cannot be some embittered crusader, but also why did you put up with any of this or stick around? You must account for every dime and syllable of support you have received in order to demonstrate your pristine motives, and you should have told just the right number of people about what happened to you, at just the right time and for just the right purposes. (Maclean’s)

This week as Ontario unveiled its approach to retail marijuana sales, Jason Markusoff couldn’t help but notice the language ministers used seemed to come straight out of the war-on-drugs era. Which is funny, since the Doug Ford PC’s are taking a far more open approach to pot sales than their predecessors had planned: “The rhetoric was all about crackdown and toughness, even as the policymaking charged in the opposite direction, towards entrepreneurialism and better access for adults who want to buy and use the drug recreationally.” (Maclean’s)

Eleven years and 10 days after Canada’s Parliament unanimously awarded Aung San Suu Kyi honorary Canadian citizenship for being “one of the leading forces in the continuing struggle for democracy and human rights in Burma and a symbol of the desire of the people of Burma for political freedom” MPs voted unanimously again to strip her of the honour. Suu Kyi, accused of failing as leader of Myanmar to halt the persecution of the Rohingya minority in her country, doesn’t immediately lose her honorary citizenship, but the machinery for doing so has been set in motion. (CBC)

Here’s a glimpse of how crazy New Brunswick politics has gotten in the wake of Monday’s squeaker of an election, which left Liberal Premier Brian Gallant tenuously clinging to power. His Progressive Conservative rival Blaine Higgs is apparently answering his caucus members’ phones trying to catch the Liberals stealing his MLAs. “(Gallant’s) hoping that he can buy somebody from my side of the house,” Higgs told a reporter, noting that he was with another Tory MLA when a call came in from the Liberals. “The reception got real bad when I answered the phone.” (Canadian Press)

Only one province is on track to erase its debt over the next half century: Quebec. (Yeah, we were surprised too.) The rest are fiscal basket cases, according to the Parliamentary Budget Officer’s latest annual fiscal sustainability report. “The federal government’s finances are sustainable over the long term. However, it’s a totally different story for provinces and territories,” said Yves Giroux, who was appointed to the office in June. Cue calls by the provinces for more federal transfers. (Globe and Mail)