Whether it's the NDP targeting 'big corporations' or the PCs talking about Liberals who 'just think they're better', everyone is an elite now 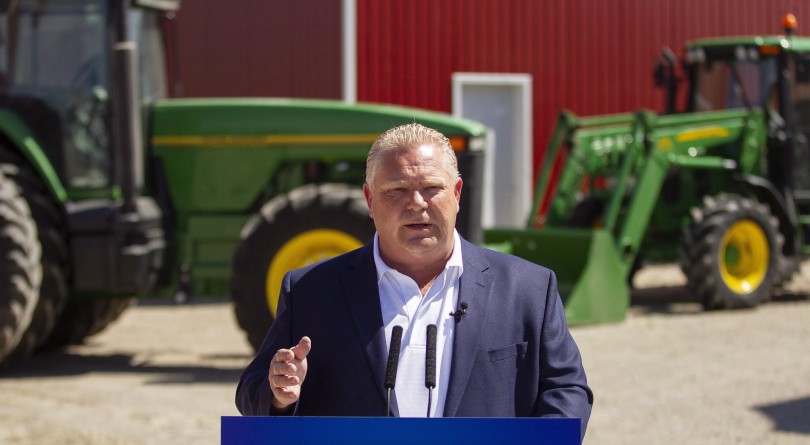 Ontario PC leader Doug Ford makes an announcement during a campaign stop on a farm in the town of Lakeshore, Ont. on Wednesday, May 23, 2018. THE CANADIAN PRESS/ Geoff Robins

Elitism is playing a prominent role in the Ontario election—sometimes covertly, sometimes with screaming obviousness. It’s a usefully malleable term, because while it is undoubtedly snide and critical in its invocation, it can be defined—and has been, with wild abandon—as basically any person, group or mentality the speaker opposes and would like to set themselves apart from.

For NDP leader Andrea Horwath, elites are wealthy companies and individuals she says PC Leader Doug Ford will coddle with tax cuts, while gutting services for everyone else in ways he refuses to explain.

“Doug Ford says he’s for the people, but it’s clear that his plan is for the rich,” she said in a statement after the third and final leader debate on Sunday. “You can’t cut $6 billion from government spending without closing hospitals and having fewer teachers and educational assistants in classrooms.”

Her statement further argued that Ford would trim those expenses in order to finance “a multi-billion dollar tax break for big corporations,” along with a tax refund that would amount to $1,200 a year for high earners. Most ordinary people would get a measly $18, the NDP claims. “$18 barely buys you a pizza,” said Horwath, invoking the quintessential food of certified ordinary folk. “This tax plan is just insulting.”

The entire Ford political dynasty, meanwhile, was built on an explicit anti-elite message. Ford’s late brother, Rob, was the Toronto mayor infamous for many things, among them fighting on behalf of “the little guy” against various fat cats wasting public money.

When the elder Ford announced this past January that he was abandoning his second attempt at a Toronto mayoral campaign to run for the suddenly vacated PC leadership, he said the elites were his whole reason for doing so. “I had every intention of running for mayor of this great city,” he said. “But I can’t watch the party I love fall into the hands of the elites.”

The elites, in this case, were threats from within, and Ford suggested that he alone was in touch with the concerns of ordinary people and willing to fight for them. “Make no mistake about it, the elites of this party — the ones who have shut out the grassroots — do not want me in this race,” he said. “But I’m here to give you a voice.”

As Tasha Kheiriddin pointed out in an iPolitics column at the time, it was a bit ironic to see Ford bang the drum of anti-elitism in a press conference from the basement of his mother’s huge Etobicoke home—the unofficial seat of power for a local political dynasty for decades.

But for Ford himself, there is little cognitive dissonance there, and the identity and attitudes of the true elites are crystal clear.

Two months after his announcement, he won the PC leadership, and a couple of days after that, he did an interview with CBC’s Metro Morning. Early in the segment, host David Common asked Ford point-blank: “What is an elite?”

Then he added, “And they drink their little bottle or glass of champagne with their pinkie up in the air,” helpfully demonstrating this live in the studio. “That’s what an elite is.”

So “elite” doesn’t mean establishment, Common clarified, pointing out Ford’s own family’s civic clout. “Elitism isn’t anything to do with money,” Ford said. “Half of ’em don’t have two pennies to run together. They think they’re something that they aren’t.”

Now, in the thick of the election campaign, it’s a pejorative Ford likes to fling at Liberal Leader Kathleen Wynne, her longstanding government and the various hangers-on he says have benefitted from a cozy relationship with them. In this usage, it’s a label that very much turns on money and access. The extremely well-compensated CEO and board of Hydro One are the poster children for this.

But Rick Gibbons, who hosts a daily political show on 1310 News in Ottawa, locates the elitism in a “broader disconnect” between Wynne and Ontario voters, and in general political discourse right now. If you question the sustainability of health care in this province, you are branded as being against universal health care and “willing to see the sick die on the streets,” he argues. If you’re a small business owner who opposes the minimum wage hike, you’re a bad employer, and if you’re a parent who doesn’t like the new sex ed curriculum, you’re a bad parent.

“She comes across to a lot of people I think as just being terribly elitist—maybe the most elitist government I think we’ve ever had,” he says of Wynne. “Anybody opposed to her views on the economy, the environment, sex ed, anything—especially if you’re conservative, you are somehow of inferior intellect, and opponents are rooted in some kind of outdated view of Ontario. A lot of people in small-town Ontario, rural Ontario, certainly eastern Ontario, just don’t identify with the values that she represents.”

Every subsequent poll that emerges showing the Liberals in distant third place would seem to confirm Gibbons’ hypothesis. Of course, the difference between someone seeming to sneer down their elitist nose at you and someone who simply holds different positions could, in some ways, be seen as a function of the power that person holds and how long they’ve had their way with things.

By that measure, the Liberal government’s 15 years at the helm is fuelling the sense among some voters that someone is wagging a finger at them, and they’ve had enough of it.

“Others are on the outside looking in, or at least feel it,” says Gibbons.