Why B.C. might actually get proportional representation this time

Some senior NDP members are boldly predicting that PR will happen. Are they banking on a long-term relationship with the Greens? 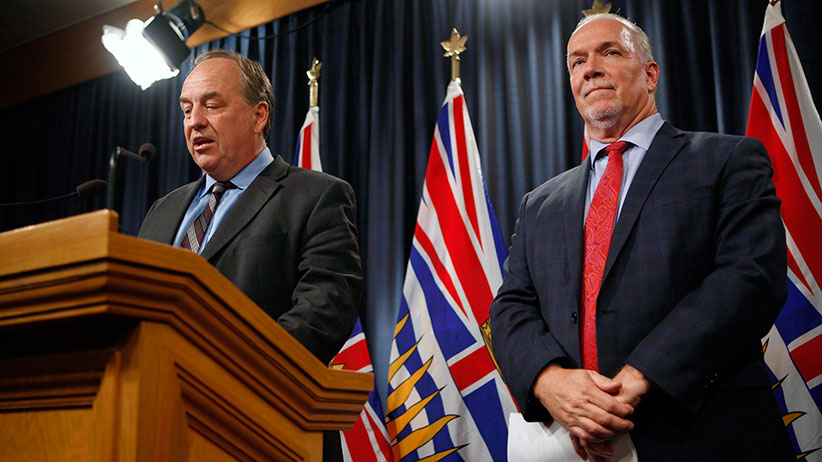 On a recent winter evening, Shane Simpson, B.C.’s social development and poverty reduction minister, was working a modest crowd at an East Vancouver refugee assistance fundraiser, where he was in distinctly friendly company. Simpson is an NDP veteran who holds East Van seat of Vancouver-Hastings, one of the party’s safest. Some in the riding hadn’t seen him since the election—a nail-biter which ended in a minority NDP government surviving by virtue of an agreement with three Green Party MLAs.

When asked how the relationship with the Greens was going, he flashed an impish grin. “It’s solid,” he said.

“Even with Site C?” he was asked, a reference to the partially completed hydro-electric megaproject started by the defeated Liberals and vehemently opposed by the Greens. “How can you be so sure?”

A few weeks later, the NDP announced plans to carry on with the divisive Site C build. The Greens publicly fumed, but as Simpson predicted, continued to prop up the government. They appear to be holding out for their grand prize: electoral reform.

If a referendum on proportional representation passes next year, B.C. will set a course to become the only province in Canada without a first-past-the-post voting system. A yes vote would accelerate the Greens’ rise in B.C. politics. And political observers and academics predict a win in the province could trigger a domino effect among others.

It’s a calculated risk for the NDP. The promise of a referendum on electoral reform is key to the party’s current governing arrangement with the Greens and without it, the New Democrats will not complete their full term as government. However, enacting proportional representation, where parties are awarded at least some seats according to percentage of the popular vote, arguably sinks the NDP’s chances of ever again forming a majority government. So those within the party who support electoral reform are banking on a long-term relationship with the Greens.

Premier John Horgan, who promises to hold a referendum by November, started by appointing a panel to guide public engagement on the process. The group’s members, academics—who unlike large swaths of the public, understand and think constantly about proportional representation—were largely sympathetic.

The current first-past-the-post system favours large parties and tends to create “false majority” governments, says Max Cameron, a panel member and University of British Columbia political science professor who is firmly in the Yes camp. “You get, fairly frequently, a government that may win substantially less than 50 per cent of the vote but get substantially more than 50 per cent of the seats. I think that leads to arrogance … it actually diminishes the role of the legislature.”

But there are formidable detractors. The dominant Liberals who have enjoyed long stretches of power, often winning with less than half of the popular vote, will not benefit from proportional representation and are almost unanimously opposed. There are those within the NDP who are against the move as well, but they are out of sync with Horgan, who says he will actively campaign for the Yes side.

One such opponent is Bill Tieleman, a NDP warhorse who has been around long enough to remember the glory days of back-to-back NDP majorities in the 1990s. He joined forces with political rivals to campaign successfully against B.C.’s two previous electoral reform referendums. Now, once again, he is girding for battle, vowing to set up an official group and raise funds to oppose the referendum.

PR will lead to bloated government, decrease regional, accountable representation and give extremist (far-right) views undue influence in government, Tieleman maintains. “We will have more small parties with marginal views or fringe or unpopular views represented in the legislature,” he says. “And we will always have minority governments.”

But as Green support increases, the prospect of future NDP majorities grows ever dimmer. The NDP brain trust in Victoria, led by the likes of Horgan and Simpson, seems to have concluded that there will be no return to the halcyon days of the 1990s. The Greens stand to benefit most from electoral reform and will of course be out in force on the Yes side. The joint Green-NDP effort vastly improves the chances of the referendum passing, political observers predict.

RELATED: What electoral reform could look like in British Columbia

“I think the chances are good,” says Don Desserud, a political science professor at the University of Prince Edward Island. If the Yes side gets a positive result, he adds, “I assume they would move forward with some kind of proportional representation.”

If B.C. adopts PR, the increased Green Party clout will instantly change the province’s political landscape. “One of the reasons Germany has made significant changes toward its entire energy infrastructure has to do with the Greens coming into politics and coming into a coalition with the Social Democrats,” Cameron says. “I think we’re seeing something very similar in B.C.”

A yes vote in B.C. could also pave the way for other provinces like P.E.I. and Ontario, where past electoral reform efforts have failed.

Ontario voters rejected mixed-member proportional (MMP) representation in a 2007 referendum, held in conjunction with a provincial election. There had been months of study and a citizens’ assembly overwhelmingly supported the idea, recalls Nelson Wiseman, a University of Toronto political science professor. “What happened in Ontario was no party was really out there beating the drums for it.”

P.E.I. has twice asked residents to weigh in on changing the electoral system. After a 2005 plebiscite failed, a second non-binding vote was held last year, with 52 per cent of those who voted endorsing an MMP system. However, the Liberal government declared the turnout (36.5 per cent) too low and declined to act on the results.

RELATED: Why the electoral reform sham will breed cynicism

Islanders—at least some of them—were outraged. As the plebiscite results and follow up was debated in the legislature, 300 people turned out in protest. “It was an amazing turnout,” says Desserud. “I mean, the population of Charlottetown is 35,000 people. That’s a heck of a crowd.”

Only part of the backlash arose from PR supporters, Desserud concedes. Some of it was simply fallout from a broken promise. “There seems to be more people here who were upset about the fact that the government did not follow through on their promise to respect the vote, than there are people who were in favour of the change in the first place.”

Under pressure, the government has now promised to put the question once again to voters in the 2019 provincial election. But given that neither the ruling Liberals nor their main Conservative rivals stand to benefit, Desserud says he would not be surprised if that promise too is dropped before voting day.

Electoral reform has been raised nationally as well, most recently by Prime Minister Justin Trudeau, who campaigned on the issue and then dropped it after he won with a safe majority. He said his change of heart was due to a lack of consensus over what form it would take, and fears that it would empower extremist parties. There was a more cynical explanation, as well.

“The reason he spiked it was because they know that if we get it, there isn’t a hope in hell that the Liberals can get another majority government,” Wiseman said. “I look at the polls. The most recent poll by Nanos, actually has the Liberals higher than they got in the election. So why risk it?”

Trudeau is not the first party leader to campaign on electoral reform only to dump the plank once elected with a comfortable majority. In B.C., Gordon Campbell’s Liberals howled in 1996 after the NDP formed a majority government despite losing the popular vote by over two percentage points. Campbell swept back to power in 2000 on a promise of electoral reform, yet sunk its chances by setting bar high (60 per cent) for a referendum win.

Wiseman predicts if B.C. adopts proportional representation, other provinces which have flirted with the notion, will be emboldened to similarly take the leap. “I think it will really increase pressure on other provinces to do it.” But it won’t happen overnight,” he says. “Other provinces will say let’s see how it works out in B.C.”

Desserud agrees, and adds if it does work, it could prove a tipping point: “It will no longer be seen as this mysterious other that they don’t understand.”