Why being boring could work for Rachel Notley 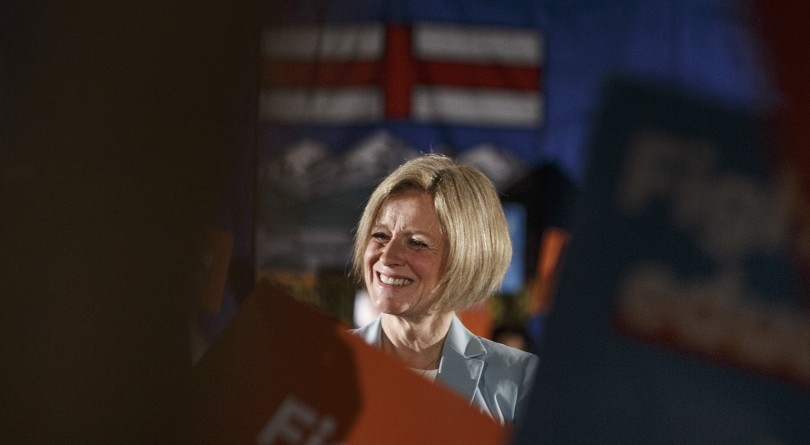 Alberta Premier Rachel Notley speaks to a large crowd during a rally in Edmonton on Sunday, March 17, 2019.(Jason Franson/CP)

Every day during Alberta’s election campaign, Maclean’s correspondent Jason Markusoff is tracking platform promises, bozo eruptions and any other notable news from the hustings. Sign up for the Maclean’s politics insider to get Markusoff’s inside track in your inbox every morning.

Rachel Notley promised to expand the NDP’s current $25-a-day daycare pilot project to every daycare and dayhome in Alberta, to dramatically ease the burden of some of Canada’s costliest child care (economic analysis of plan here, here and here). At an annual cost of $400 million by 2023, and offered province-wide (within a $50-billion provincial budget), it’s the most costly and likely ambitious platform piece she’ll  announce all campaign long, after a few less flashy first-week election pledges to add more long-term care beds, Calgary flood protection and incentives for petrochemical and oil upgrading projects.

In each case, she’s promising nothing new—just more of what the NDP has already brought Alberta. Even the $25 day-care plan is a fuller realization of something Notley promised in the 2015 NDP platform.

An underdog incumbent government doesn’t tend to run a more-of-the-same campaign. So what gives? Alberta’s budget deficit, currently at $6.9-billion, is a major political albatross in the once debt-free province—the NDP claims they can balance by 2023, which leaves them little wiggle room for the sort of multibillion-dollar goodies that Liberal or NDP governments like to offer in elections. Secondly, the NDP wishes to come across as fiscally pragmatic and stable up against a fiscally hawkish and reformist United Conservative Party, and know they’ll lose in Alberta if they hew too close to New Democrat spend-happy stereotypes. Notley even pitches child care as an economy booster.

The NDP is also taking care not to distract  from a bigger message it is pushing: attacks on Kenney’s character, his social conservatism and the rogue candidates he’s had to distance himself from. Notley’s side doesn’t want the ballot question to be about the economy (as Kenney does) and seems content not to wage a battle on whose policy book is most inspiring. They’d rather point to how scary and menacing their opponent appears. If Notley emerges as the kinda boring alternative?  Fine by the NDP.

So much for not legislating on social issues, Kenney

Here’s where the attention from the NDP and media outlets to Kenney’s past as a crusader against LGBTQ rights has policy teeth: the Conservative leader plans to roll back protections for students involved in gay-straight alliances. The previous Tory government passed a law requiring all public and private schools to form GSA peer groups at students’ request; the NDP fortified that right with legislation spelling out consequences for schools that don’t do so or that tell parents their kids have joined these clubs—which defenders liken to outing gay kids.

In his education platform, Kenney pledges to return to the Tory-era rules—not roll back GSA requirements altogether, but weaken them. This will cheer conservative parental groups that argued the NDP’s reforms were coercive, and give the NDP and LGTBQ rights defenders something to fight against. (Edmonton Journal)

Angst on the farm? That was then…

The NDP readily admits one of its early missteps was trying to rush through Bill 6, which for the first time required worker safety coverage on farms. A mixture of suspicion and fear propelled a major rural revolt—so much so that in 2016, Saskatchewan’s then-premier earned cheers for telling a rural politicians crowd his party would never bring in a Bill 6, even though his province had long had farm labour protections.

Seizing on that old anger, UCP’s proposed “Farm Freedom Act” would repeal some rules and loosen others. Now who’s worried and unhappy? Major farm organizations, who supported the ultimate rules and don’t want a weaker farm safety regime. “We had a lot of input into the final result of Bill 6, and farmers have settled down since,”  Lynn Jacobson, president of the Alberta Federation of Agriculture. (Lethbridge Herald)

Eva Kiryakos, the second UCP candidate to quit in the campaign’s first week over odious social media comments—hers attacked trans people, Muslims and gay student alliances—pointedly didn’t apologize as she resigned in a Facebook post and video. Leader Jason Kenney, rather than distancing himself or in any way criticizing her remarks, praised her for putting the party above her own ambitions. “I thank her for that selfless decision,” he told reporters. “I’ve always been clear that the United Conservative Party is a big tent coalition that respects human dignity and will protect the rights of people regardless of how they pray or who they love.” Neither he nor his now-former candidate acknowledge they may have besmirched that dignity or those rights—he mainly dismisses such assertions, often raised by the NDP as “fear and smear” against his party. (Calgary Herald)